Ultra-quick NPCs on the fly with Rory’s Story Cubes

Having just started up a low-prep Star Wars: Edge of the Empire game as my group’s “backup campaign,” I got a chance to put John Fiore’s guest post about creating NPC backstories using Rory’s Story Cubes into practice with my own set of cubes. 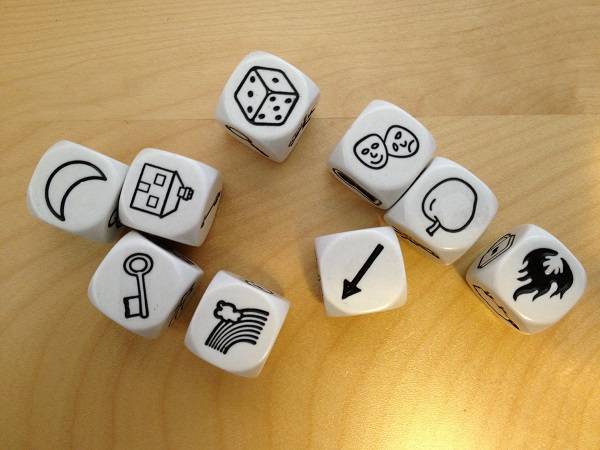 John’s method uses all nine dice and creates a deeper character than I often need, though, so I took a different route. The times I find myself reaching for the cubes are generally instances when the PCs pay more attention to some random NPC — like a previously nameless merchant on some fringe world — than I was expecting.

When that happens, I do this:

That last step is where the rubber meets the road, so let’s talk about it a bit more. It sounds pretty loosey-goosey, right? It should, because it is! Loosey-goosey is good. It forces me to think on my feet and trust myself to produce a good idea on the spot, aided by the cubes.

I don’t have a plan when I roll the dice, but I do usually know what I need right at that moment. I interpret the dice accordingly.

Here’s an example from one of our recent sessions.

Who is that random Outer Rim merchant?

The PCs had stuff to sell, and they made a good roll to find a buyer. So who is this guy? 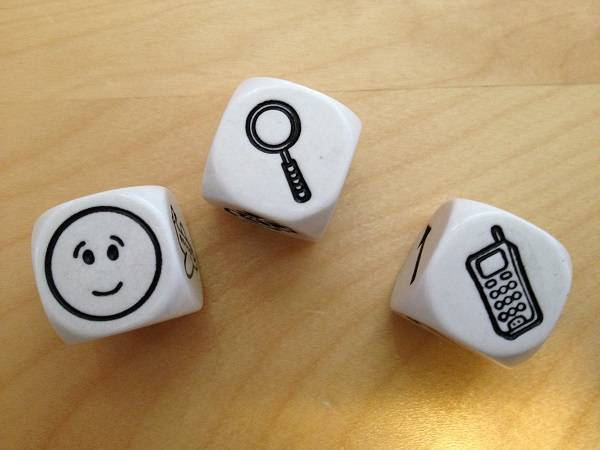 One of the PCs was flirting with the merchant, hoping to get a discount, so I wanted to know how he felt about that. I rolled a smiley face, so he was receptive.

I also needed a hook to help me describe his market stall/shop, so I used the magnifying glass for that: He became a collector of antiquities and oddities from all over the galaxy.

I ignored the third die.

Riffing on the two things I established on the spot led me to portray him as extremely outgoing, interested in the PCs and their wares, and the sort of fellow who plies his best customers with peculiar wine and lingers over the transaction.

The cubes were my jump-start, and a jump-start is exactly what I needed. Story Cubes are great for jump-starts — just grab a few, roll, and see what shakes loose. Don’t worry that the images likely have nothing to do with the game you’re running or even with the NPC you’re about to portray; just led an idea or two pop into your head and run with it.