Timelining NPCs To Make Them Organic 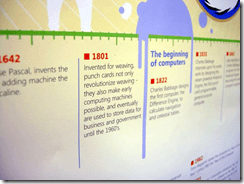 “Is professor Yell doing this now, or wait, when did I plan to have him introduce that plot point. Oh crap, I was supposed to have the spider queen attack the group after they got the idol, not beforehand. Shoot! Who was it that sent the quicklings after the grey ladies!”

My latest game is NPC heavy, and almost all of the NPCs are politically motivated in some way or another. This puts an extra bit of importance on NPC actions and when they occur. There are a lot of balls I’ve got to juggle, so I’ve been looking for effective ways to do so. To keep things organized, I’ve been doing something that I call timelining.

Timelining, in my version of it as it applies to RPGs, is the act of writing out NPC actions and plans in a generalized order in which they will likely occur. It is drawing out the straight line of action for an NPC or NPC group if everything were to go according to plan.

This is different from merely plotting out an NPCs motivations in one key way. When you timeline an NPC, you begin by taking the PCs completely out of the equation. This gives you a view of their goals and actions, building a version of the character without tailoring them around the campaign or the PCs. You can watch the PCs intersect the NPC timeline and react to the actions, as opposed to building the NPC with the campaign in mind and being tempted to try to constrain the PCs to the pre-plotted courses.

Malvora the Spider queen is the main villain NPC in a space opera game I’m not currently running. I start by writing out Malvora’s Timeline in a very basic fashion. I set up her actions and plans beforehand, making sure to merely think about it from Malvora’s side and not accounting for any way the PCs might be invovled. This gives me an idea of what her actions are and what she is planning.

Ok. So we’ve got a timeline of Malvora’s plans without PC interaction. We know what her general plan is and what steps there are from the beginning to the end of Malvora’s plan. We have a general idea of other factions which might act against her and how that might go. The backbone of the next couple of sessions is built out, and ready to get decimated. She is a much more organic NPC than if we had written her out while thinking about the campaign and how she will act towards things the PCs are likely to do.

The PCs actions can intertwine and screw up Malvora’s plans all to high heck now, but we have a base for what Malvora intended. If we introduce the PCs to the game by having them foil Denarius’s theft, we can take this timeline and extrapolate the changes that the PCs bring. If they fail and Denarius gets away with the device, then we know that it will take the scientist’s 3 weeks to decode the security on the device, giving room for the players to pursue the action in their own ways or giving us hooks based on what occurred in the previous game. Maybe Dr. Ferris hires them. Maybe the FEC forces throw the PCs in jail, misinterpreting the situation.

With an approach like this, Malvora gets a chance to grow and be affected by the PCs actions instead of allowing predetermined outcomes to cage the PCs in. 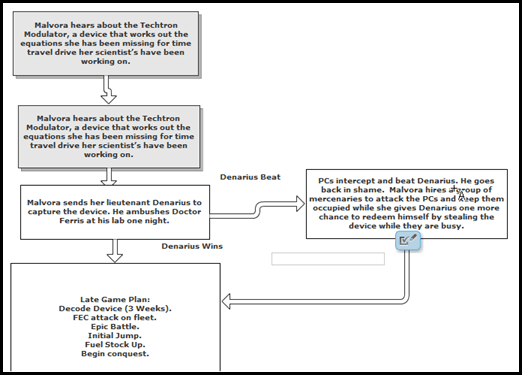 An NPC’s timeline is fairly linear to start with, but as things get changed the
timeline becomes more of a flow chart. The NPC is still trying to fulfill their plans,
but they must accommodate for the the continual changes create.

Why I Find It Useful

Timelining out an NPC’s plans this way is much more work than I normally do for NPCs, and it does create more work as the game goes on. However, it has one huge advantage to me: The NPCs grow along with the PCs. They aren’t static creations meant solely to hinder the PCs. In a game like the one I am currently running, that is a wonderful thing. The players know that the NPCs aren’t merely foils to their plans, they are living and evolving characters whom they can interact with.

From my perspective as the Game Master, I know the NPCs plan out to the end. I know their end goals and what they were aiming for. When the PCs interfere, I can accommodate and change things while still aiming for the end goals.

Malvora might decide to use her resources to covertly hire the PCs to work for her rather than try the head on approach if they prove overwhelming to her militarily. Maybe she will decide the Modulator is too troublesome and send her minions after a supercomputer, one that has more raw power but is not built to the task. I can merely timeline out her plans for that in a basic way and then figure out how the PCs would encounter those.

Timelining an NPC’s (or many NPCs) actions might not work for every game or play style, but it has some nifty applications. The process is also a fairly simple one.

2 Columns/Index Cards  – When I do this for my current game, I generally use 2 columns on a 1 page sheet or 2 index cards. In one is the initial timeline and goals. In the other column (or other card) I place checkmarks if things went according to plan or I write notes and draw lines to point to where things lead. Here is a recreated version of what happened in the Malvora example (apologies for the handwriting and shorthand). 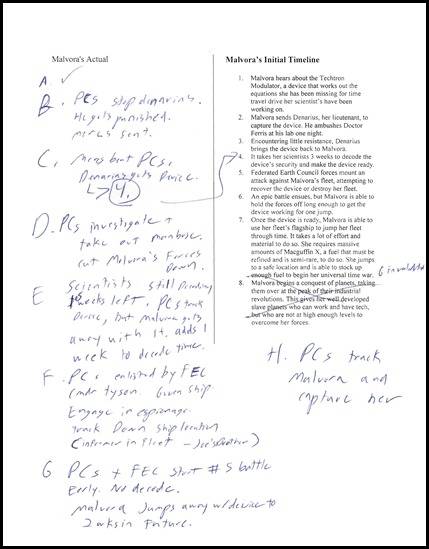 Flowcharts  – One thing that works well for timelining NPCs are flowcharts. If you can do it electronically, you can really modify things as needed and keep things neat. It works really well, especially if you have multiple NPC timelines in play.

Gliffy – I used Gliffy, a mostly free online flowchart maker to do the flowchart example above. It worked really well, but Kurt “Telas” has used it for extended periods and mentions that it gets nerfed after a 30 day trial. 0
http://www.gliffy.com/

Dia – Dia is a freeware flowchart maker that I’ve heard highly recommended on many forums.
http://dia-installer.de/index.html.en

The big downside of this approach is constantly updating the timelines. The big upside is having a concept of the NPCs and their goals that you can deviate from to make the NPCs feel more organic. Malvora’s example is very general, but I’ve got about 6 timelines going in my current game that help me conjecture on how one NPC will feel about another NPC being defeated by the PCs, or how linked plot points are affected by PC actions. It helps to keep the chaos of the multiple PCs under control, and when I’m at the actual game I’m in total improv mode. I know how the NPCs feel, I know what goals they are working towards, and I don’t hear that wiggling little voice saying “That will totally destroy Suvid’s plans!!!! Stop him!!!”.

Do you think that timelining an NPC out would benefit your game or would it be too much work? How do you generally plan out NPC motivations and actions?

14 Responses to Timelining NPCs To Make Them Organic