The Fish Tank as an Intrigue

Today’s guest article by Gnome Stew reader Rickard ElimÃ¤Ã¤ is a follow-up to his previous piece on the Stew, The Fish Tank as a Mystery. Thanks, Rickard!

Imagine the characters being fishes. Throw them into a fish tank filled with piranhas, lean back and watch what happens when they start swimming around. This article will show you how to create an open-ended intrigue in 20-40 minutes by following five steps. It will also talk about some of the theory behind it and finally how you should use this model during the session.

Write between one and three events on a piece of paper. The events usually have something to do with the setting. Each event should be at most a short comment!

Continue filling out the paper with people, groups, events, and items. Never places! Places are instead areas locations where interaction takes place. Factions can be things you find cool; factions from roleplaying books; factions that the players have made up; elements from movies or books. Between 7-9 factions is enough for a scenario that spans over 1-3 sessions. 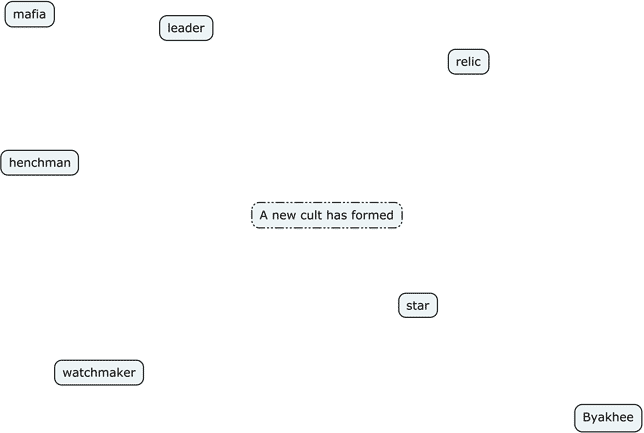 Draw lines between the factions at random to create relations between them. Describe each line. It’s during this step that the intrigue takes it’s form. Up until this point, all you had were some scribbles on the paper. 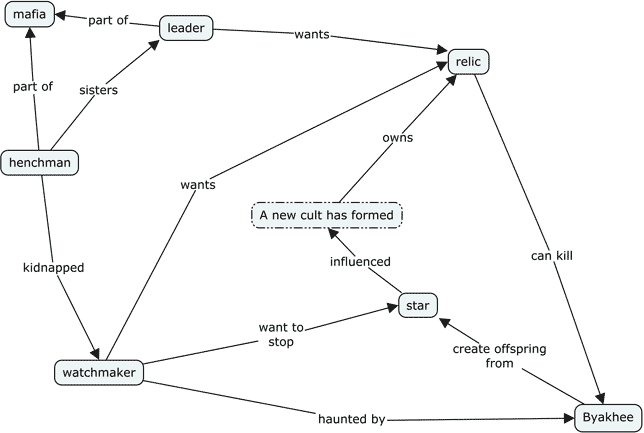 4. Think of a Storyline

Possible outcomes, not set in stone. Don’t write them down! Why is the byakhee hunting the watchmaker and what happens if the monster disappears? What happens if the maffia get hold of the relic and how will the cult react to it?

These scenes are major situations where you reveal one or more relations to the players. The relations are the scenario, and you should always reveal at least one for each scene.

The Relations Are the Scenario

You can find three types of relations in a fish tank.

Passive relations provide color, and they usually describe things that happened in the past. Co-workers is an example of a passive relation. Two people in the same mob gang have a passive relation to each other. If one thing happens to the first, it’s not certain that it will spawn a reaction from the other.

Reactive relations, on the other hand, are typical when two factions in the scenario care about each other. The two mobsters could be sisters, for example. If something happens to one sister, the other one will certainly react to it.

Why do the sisters want the relic? A passive relation from the sisters to another faction could tell you why. Perhaps the Byakhee made their brother insane? Draw a relation between the sisters and the Byakhee and write what the creature has done on the line.

It’s important that the players have an agenda of their own, so that they will take initiative in moving through the scenario. This has always occurred in roleplaying games, often in the form of the mysterious man who sits in the tavern just to give the players a quest.

The agenda should have something to do with a faction on the map, so that when the players move to fulfill their goal, they will collide with others who have an active relation with that faction. While the players are taking care of that new faction, even more factions will start to collide with the players’ plans, and so is a chain of consequences born.

Let’s say the watchmaker is an old uncle to one of the characters, who has mysteriously disappeared. The leads will take them to the cult where they will get their hands on the relic. That will in that turn draw the attention of the maffia sisters and, somewhere along the line, the byakhee will show up.

As you can tell, the active relations will be revealed to the players in the form of countermeasures from other factions while they are trying to follow their own drives. Whatever the players do, they will step on someone’s toes, but at least they will learn more and more about the intrigue. In other words: the intrigue will mostly rely on reactive and active relations.

When the players interact with one faction, look at the relationship map in front of you. Think of a proper response from one of the related factions and throw in the consequence in the next scene. That’s when the piranhas will get them.

If you want to read more about the fish tank, be sure to check out my old article The Fish Tank as a Mystery. That article will give more depth to each step, and it also explains why places can never be a good faction.

Afterword: I used CMapTools to create the relationship map, but I normally use pen and paper. I would like to thank Tod Foley for helping me out improving this article.

8 Responses to The Fish Tank as an Intrigue