Battle Boards, a product that just launched on Kickstarter, are magnetic, dry-erase battle grids that can be combined using velcro strips. (They have no connection to Battlegraph Dry Erase Tiles, aka Battle Boards, which we reviewed here back in 2009.)

Although we’ve reviewed products like this before on the Stew — Battlegraph Dry Erase Tiles, noted above, as well as Tact-Tiles in 2006 and Automagic Tiles just last month — Battle Boards don’t fall into quite the same category as those products. Yes, they’re modular in the sense that you can stick two of them next to each other, and yes, they’re dry-erase, but they don’t fit together like puzzle pieces and they’re made of metal.

My review set includes one tile that is final (a production item) and one that is “next-to-latest generation,” but looks very close to final to me. I also received some adhesive magnets and prototype magnetic dungeon features. My review package (which was free) came with a letter from Aaron Renfroe, the creator of Battle Boards, detailing what stage of the production process each item was from.

My experience with dry-erase map tiles

I used my set of Tact-Tiles in several short games as a GM, and then in at least one campaign lasting more than a year as a player; I still have that set (they’re built to last). I logged dozens and dozens of hours of play time using them over the course of a few years. They rock.

Battlegraph tiles I’ve only used as a player, but we used them in virtually every session of two D&D 3.x campaigns played weekly over the course of about two years. I liked them a hair less than Tact-Tiles, mainly because the grooves tended to collect dry-erase dust and I found the white surface a bit too stark compared to Tact-Tiles’ gray plastic. The first problem was minor and the second was purely a matter of personal preference; Battlegraph tiles were also a great product.

I reviewed Automagic Tiles but have never used them in actual play, and I wouldn’t use the set I was sent. The pre-release version I reviewed has promise, but it’s not a good product in the form I saw it in.

The scoop on Battle Boards

So what sets Battle Boards apart?

With the caveat that Kickstarter pricing can’t be considered “real pricing,” the standard boards are $45 and the EX boards are $55.

There’s also a table-sized version, the aptly-named Battle Table, which is the same as the Boards apart from its size: 2’x4′. There are a ton of options spelled out in the Kickstarter that I won’t get into here — I’m only going to review what came in my package.

They’re beasts! Being steel, they’re heavy for their size and they feel substantial. Both sides are smooth; the undersides are coated, but not gridded. Here’s the main event, the type of board (“strategic,” with a 1″ grid) that I think most readers will be interested in. This one’s an EX, 16″ on a side. 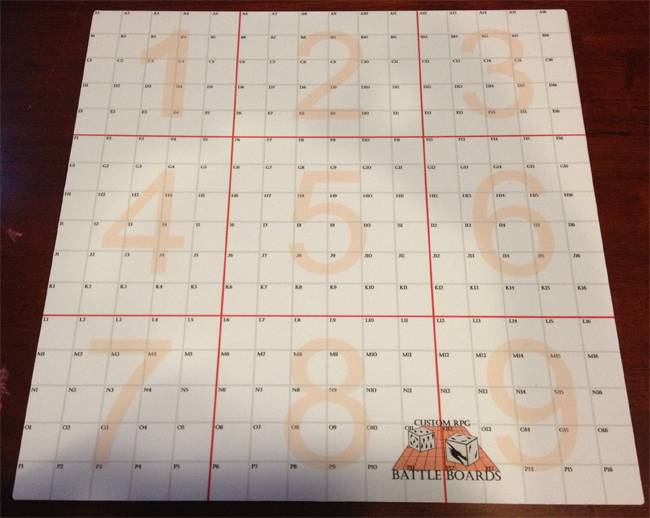 It’s divided into nine sections, each of which has a partially transparent number on it, and then gridded L>R from A1 to P16. The grid lines are pale grey, and easy to see without being distracting. The cell numbers are small and black; the section numbers are large and pale red. I wish the company logo were faded as well, but it doesn’t take up all that much room.

This board is final, just like what you’d get by backing the Kickstarter. 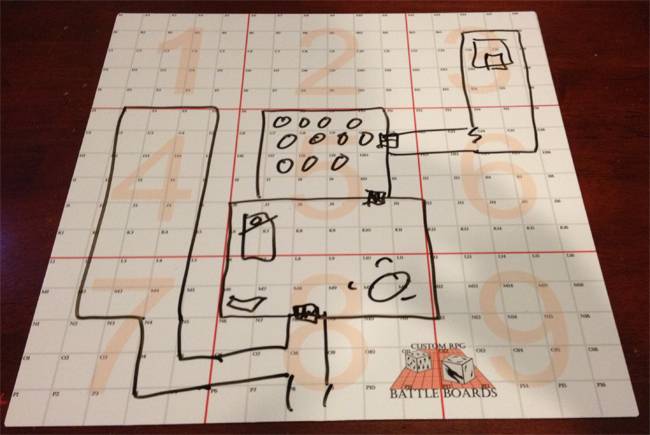 The dry-erase surface is nice — smooth, easy to draw on, and easy to erase. The stark white background is intended to make it easy to use with a projector, if your setup is that fancy. It wipes clean easily, with no staining or residue or other problems. 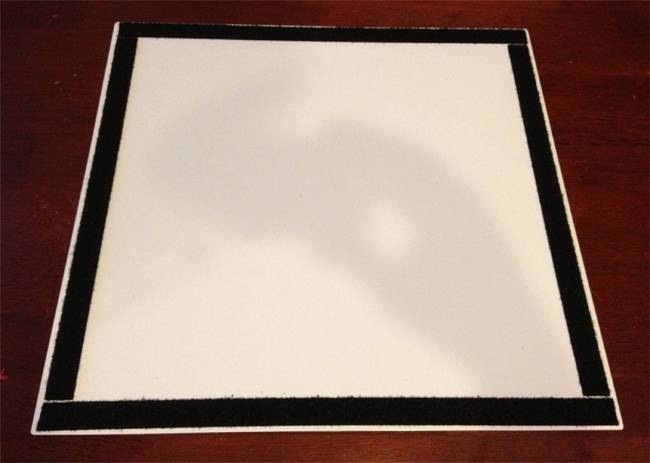 The black strips are velcro — the soft fuzzy half. I like that it’s applied to every edge and forms a complete square. This means it’s easy to attach at any point using the “hook” half of another piece or two of velcro. 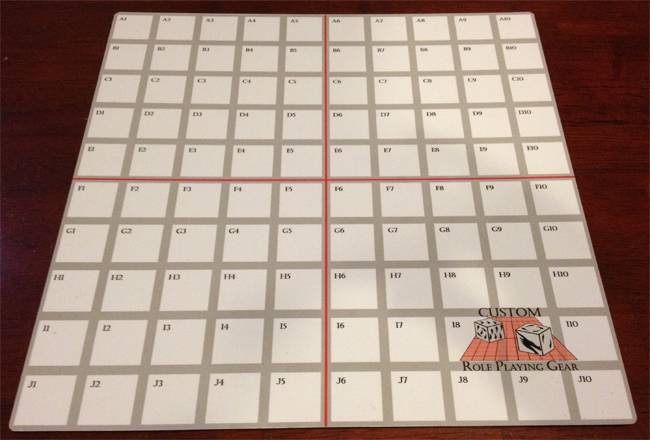 My letter from Aaron describes this board as “next-to-latest generation (lacking sector labeling).” Apart from the missing section numbers (the pale red ones seen on the EX board), it looks the same to me — like a finished product.

Other than the size, the big difference here is the cell padding — the space between each cell in the grid. The cells are 1″ squares, but in a 10×10 grid — not 12×12, as they would be with the “strategic” pattern. 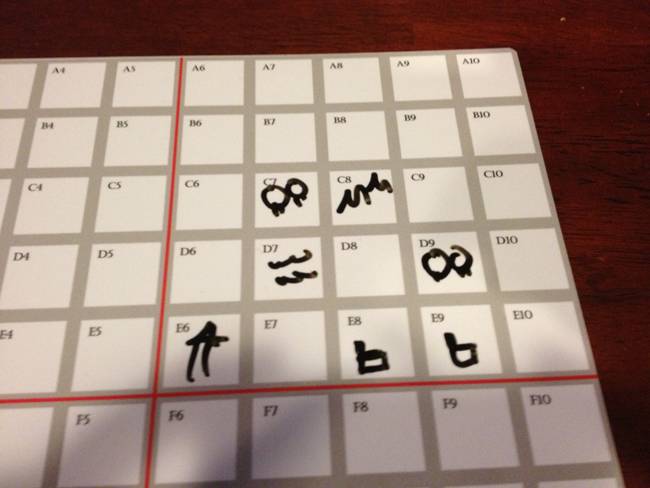 I sketched a crappy point-to-point map on part of this board, which is one use for this grid pattern. I believe it’s intended to be used with their magnetic dungeon walls and other features, as the cell padding leaves room for adding those elements. It also leaves room for drawing in dungeon walls without straying into cells where miniatures will be placed.

Personally if I’m going to buy a gridded board, I want a 1″ grid with no cell padding. I don’t have a use for this style of board, but you might. In any case, it’s nicely made, just like the other one.

Here’s the back of the standard board, which has the hook half of the velcro strips attached to the soft half on all sides: 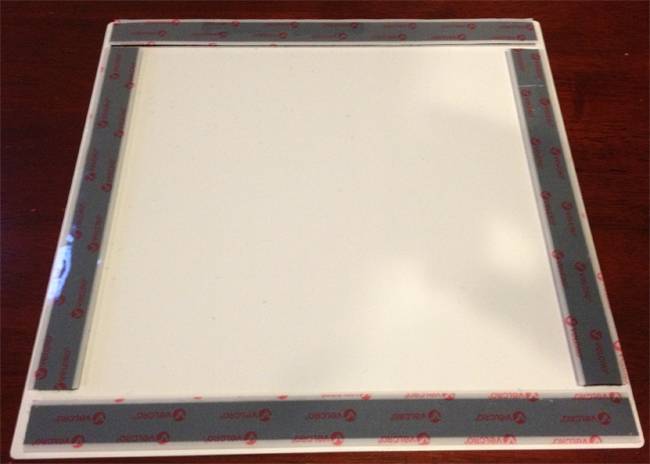 Here they are joined up (though you likely wouldn’t join a strategic and a roleplay board like this):

The velcro keeps them snugly together. It’s easy to apply and remove, and it keeps the steel from ever touching — or scratching — your table. According to the Kickstarter page, it’s already applied to the boards you’d receive (and is free).

From the back side:

Here’s a board edge-on so you can see its thickness:

There were a couple faint scratches on my standard board, and a few tiny bubbles in the dry-erase coating on both of them, but neither of those imperfections impacted the utility of the boards. The only flaw I found that surprised me given the overall quality of these boards was this: 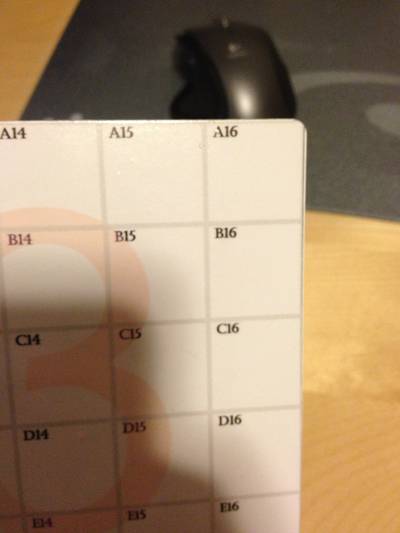 It might be hard to make out, but this corner of my EX board is slightly misaligned — you can see the bare steel peeking out. My standard board has an edge that’s also slightly off.

In both cases, the misalignment doesn’t cause a problem. You’d have to be looking pretty closely to even notice it, and the gap is so small that I’m not worried about drawing on it when using these boards.

Last but not least, let’s look at the magnets. My review bundle came with a pile of little dungeon walls and stairs and so forth: 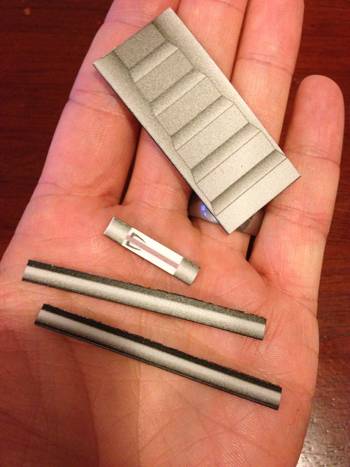 In his letter, Aaron says: “The dungeon tiles are in a third-stage Beta and need another revision or three, with an artist’s touch, before we’re ready for ‘prime time’ with them.” As they stand now, they’re not terribly impressive. 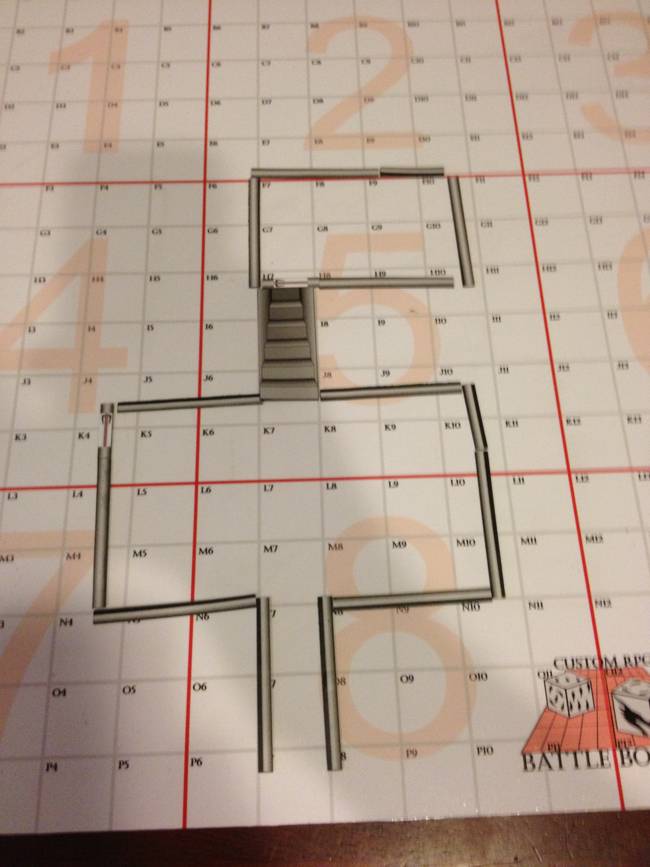 The lengths provided are fiddly, not matching up on the strategic grid, and the magnets are so skinny that they’re a bit hard to work with. Once they’re on there, though, they look okay and they stay in place well. I don’t have much use for these; I’d rather just draw my dungeons. That said, if they looked better and came in more useful lengths, I’d consider using them.

My package also included a handful of magnetic disks, one side of which is sticky. They’re not described as prototypes, so I assume they’re final. 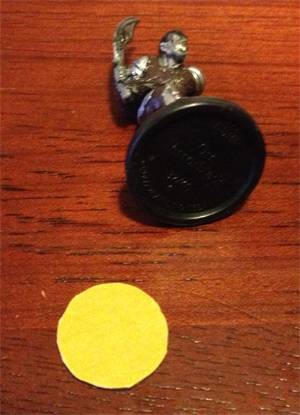 I peeled that sticker off, slapped the magnet on the bottom of this orc mini, and flipped the board upside down: 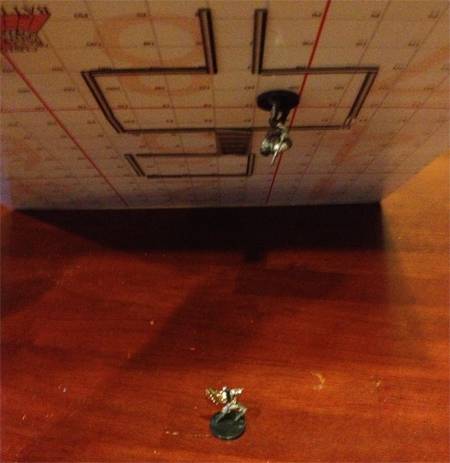 He didn’t budge. When I was done, I peeled off the magnet without damaging the mini (though you’d want to leave them on and not try to reattach them; they’re not made for that).

Along with their durability and the option to apply artwork or a colored background under the dry-erase surface, this is one of the big differentiators for these tiles. The Kickstarter page points out that if you magnetize your minis (and use their magnetic walls, if you go that route), you can leave your tiles out between sessions and everything should be right where you left it the next time you play.

That’s neat, but honestly it’s not a feature I’ve ever needed. Battles, especially in RPGs that use tactical grids, tend to get finished in one session even if it means staying up way too late. Similarly, I’ve never had issues with bumping minis out of position while playing, another problem magnetized minis solve.

But that’s me: You might pause mid-battle, have cats who like to prowl around your maps, or otherwise get great mileage out of the magnetic aspect of Battle Boards.

Battle Boards are well-made, well thought-out, and a quality product overall. They look like they’ll last for years, the dry-erase surface works as it should, and I like the combination of numbered grid cells and numbered “sectors.” The velcro is a good addition. Even if you only have one tile, with no need for the velcro, it will still protect your table.

For my money, the EX tile — which doesn’t sound that much bigger, but is almost double the area of the standard board (an extra 112 cells; the standard is 144 total) — is the better value. For $10 more you get a lot more surface area. You could buy one EX tile and have a surface that would work for many games and situations. Two EX tiles ($95) or four standard tiles ($135) would be a nice setup for just about any game that uses a grid.

I don’t see much point to the roleplay grid, the one with the cell padding, but there’s nothing wrong with how it’s implemented. Similarly, the magnetic aspect of the boards isn’t a big plus for me — it’s a nice-to-have, not a must-have. I’ve never wished my battle maps were magnetic.

Bottom line, if you want a durable dry-erase surface that offers a decent amount of play area without taking up a lot of room, and which has some nice extra features — the numbering, the magnetic aspect, the velcro — then you should consider Battle Boards. They’re solid, attractive, and functional.

Compared to, say, a Chessex Megamat ($40, 34″x48″, gridded, wet-erase, rolled vinyl), Battle Boards are expensive for the play area you get out of them, but they offer — and combine — features that no other gaming surface I’ve seen provides.

If you’ve got questions about Battle Boards that I can answer using mine, I’d be happy to answer them in the comments below. Thanks for reading this review, and I hope it was useful to you!