A Moment of Silence

This afternoon, after several weeks of waiting, my final order of Marvel Heroic books arrived. I was pretty excited (“yea, new books!”) and then fairly despondent, remembering that the game was dead. As in, no more. Finished. Kaput. And while we only played a brief Marvel Heroic campaign, it was awesome, so much so that it was my clear pick for “Product of the Year” at the 2012 ENnies (they won Silver). 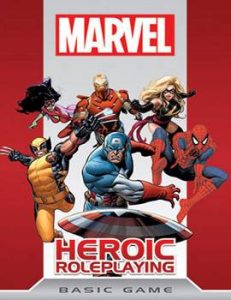 But this also brings up a good reminder of the value of RPGs in their ability to be long lasting in not only value but usage. There’s nothing stopping me from running a Basic D&D game (aside from my loathing of the system, of course) since I have the books sitting here on my desk. Same with my piles and piles of FASA Star Trek books with their much-beloved 80s Action Point system.

In fact, within the past year I reacquired the entire Victory Games James Bond 007 RPG. What was amazing was that over half of the adventures that I purchased–and they weren’t difficult to find–were still in their original shrink wrap. It’s strangely cool to unwrap a boxed set of a game printed in 1983 in 2013. I dunno, something like cracking open the mummy’s tomb!

Why did I grab the game again? Because I loved it, it is a seminal game, was years ahead of its time in mechanics, and the production values are still outstanding, even compared to today’s offerings. (Which is a sad commentary, I’ll grant you.) It’s like owning a piece of RPG history.

10 Responses to A Moment of Silence