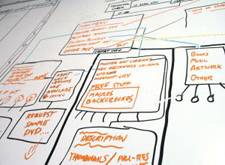 Happy GM’s Day! This is a guest post for GM’s Day by Kestral (who is Kestral on the GMing Q&A Forum, as well), who won 1st Place in the Treasure Tables GMing Tools Contest with this standout entry.
– – – – –
I would have to say my favorite tool, and the one I would consider almost irreplaceable, would be a hand-held dry-erase board.

Suitable for making maps, writing down miscellaneous information for player use, or as a GM screen and noteboard, dry-erase boards can be invaluable in the hands of players and GMs for use as a tactical aid, tool for map creation, and general aid to in-game understanding/information exchange. It also makes for a great prop when a document is to play an important part in a game.

From pre-planning to post-mortems, dry-erase boards are great whenever a lot of information — but most especially fast-changing information — is being dealt with, or when a map or visual description of something is needed, but hasn’t been pre-made.

Since the board is erasable, but DIFFICULT to accidentally severely erase (and markers of different colors are easy to purchase and can last a long period of time), it is great for use as a combat map especially when, as a GM, there is an issue of dealing with long-term environmental status effects.

Since it’s erasable, it’s also re-usable, which means that if the GM comes prepared, he/she can efficiently make use of smaller pre-printed maps in play, lessening the number of assorted papers and objects that can get lost over the course of time.

My group of friends uses several of these boards in our games, for these purposes. We put almost EVERYTHING on our boards — from character info, if it’s important enough, to our tactical plans and our initiative.

In the course of a session, we might go from using a board as a city map, to a list of things to buy, to a combat map, end up using it to get visuals of an object that’s important in-game, and then post-session, use it to write out some public notes for a later session.

I can’t even really think of a story where it obviously helped, because it has been so useful that I don’t really notice it — except in one case in a Shadowrun game I played in. In that game, buildings were being destroyed left and right, and it helped visualize the damage that the PC team and a NPC team were collectively doing to the area.

Since missiles and rockets were going everywhere during that session, walls were being destroyed every round. Had we been using a standard map with squares, we might have been at a loss if we had been trying to figure out what had been destroyed or what was on fire. As it was, it was perfectly clear.
– – – – –
Thanks, Kestral! Reading Kestral’s entry was a smack-my-forehead moment for me — I’ve gamed with a wall-mounted whiteboard nearby, but never even thought of buying smaller versions to use at the table.

This is such a simple idea, but it’s also incredibly versatile and very easy to implement — and I suspect every GM will find something new to do with it, too.

Have you used a whiteboard in your game before? Do you have any tips, tricks or novel ways of using a whiteboard as a GMing tool that you can share?