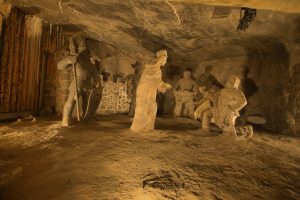 As GMs, we’re called upon to portray every monster and every nonplayer character – which is part of the fun, of course.

Superficially, that means dictating their actions in combat and providing their dialog when they are addressed directly.

But in a dungeon environment – the setting for many adventures –Â is there a little more to it?

I mean, as a sane person, I can’t envision what mental impetus would drive a wizard, evil priest or warlord to establish their base in a maze of underground caverns and populate it with monstrous creatures – which they must, for the sake of the game– but it must be a dark thinking process to begin with.

For their minions, the motivations must be equally dark, and thus, manifest themselves in some strange ways.

Take the issue of doors.

Are NPCs and monstrous humanoids leaving them open? After hours spent in darkness in stuffy, claustrophobic small rooms, wouldn’t the inhabitants spill out into the corridors, their doors left ajar, as they yearn desperately for any hint of fresh air? What’s the mindset of NPCs who are tired of being cooped up in such cramped quarters? Is it akin to the lethargy found in high-rise apartment building dwellers who seek the fire escapes and front stoops during a heat wave?

Or, do NPCs shut themselves up in their rooms, not only closing the doors, but finding ways to bar and reinforce the entrances? (I find that PCs, when resting in the dungeon, go to great pains to secure their hidey-holes. Wouldn’t the same be true for most everyone else?) There’s a lot of wicked and cruel things in dungeons, so for peace of mind, or eventually, out of abject fear, wouldn’t a dungeon’s inhabitants lock themselves away as much as possible? What’s the mindset of NPCs who dwell in dark places and whose only solace they won’t be eaten is that wood door to their cubby is stout enough to keep things out?

And what about those who employ guards and magic wards to secure their abodes? Do mad wizards and their commanders use fear to their advantage to coerce and manipulate, or must they rely on intimidation to motivate the weary? How often must the truly insane be put down? What qualifies for trustworthiness among those who plot and scheme in the dark?

I think the lesson for GMs is that “yes,” you might have all types inhabit your underground lairs. What sorts leave their doors open and which ones cower behind closed ones?

Those hobgoblins sprawled out in the corridor, they might just let you pass. They’ve had it, after all, with the setup. “Go on, stupid adventurers. We won’t stop you. There’s only darkness, death and bigger things than us ahead. We’re quitting this place anyway. You’re welcome to it.”

On the other hand, another group of hobgoblins barricaded behind a metal banded reinforced door are poised out of fear and loathing to lash out with their upraised pikes at anything that attempts to break through. They’ll fight in a fearful frenzy and won’t distinguish between friend and foe, for all intruders have to be beaten back with ferocity.

Then there’s the smart ones who’ve lit torches in all the halls and imposed some sort of order, creating an environment where everyone is pretty much on equal footing. The evil wizard is building an army down here, and that requires cooperation and common purpose. Those hobgoblins are on alert, disciplined as soldiers, but keeping their wits.

Next time you key and stock your dungeons, keep these things in mind. Open and closed doorways are entrances to the mindset of your dungeon inhabitants. Portray them accordingly.

And if you have any different experiences with portraying NPCs in dungeons, please feel free to share them here.