Shopping for the Roleplayer in Your Life

If you know a roleplayer, it can be hard to decide what to get them come gift giving time. Below is a relatively simple decision tree to help you figure out what to get them. (No, this article isn’t just veiled hinting, family and friends!) 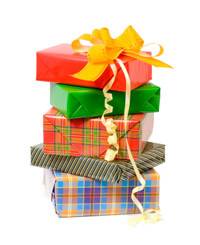 If you already game with the recipient: This article won’t do you much good– you know them in a way that an article never can. Go with your instinct and lean towards something they would enjoy but can’t justify. Alternately, lean toward something they’ve talked themselves out of buying, but that they debated before resisting. (Examples include splat-books like “Ultimate Combat” for the player of a martial character in Pathfinder, “Daeva: Kiss of the Succubus” for your Daeva playing friend, etc. Or get them the cool dice they’ve been drooling over, but won’t buy because they already have plenty of dice. We all know that having too many dice isn’t possible!)

If you’re inviting them to join your game group: Hopefully they’ve expressed some interest in gaming with you–if not, this type of gift might seem more like a gift for yourself. If they have any desire to game, there are lots of great things you can do to make gaming welcoming. Figure out what game you’ll be playing when they open your gift, and pick things that go with that game. Examples include:

If you’re all new to roleplaying: Starter sets are great! If you want to try roleplaying, gifts can encourage friends and family to try it out, since there’s no risk or expense to them.

For Kids: If you’re looking to introduce kids to roleplaying, being their first GM lets you skip past the boring reading rules part! For older kids, the games above work great. For younger, you might investigate games like the following:

How about games without GMs? Sometimes the hardest part of roleplaying is to find someone willing to prepare the game in advance. With these games, everyone can just show up and play.

How about a more trustworthy gnome’s opinion?

Sure thing! Martin’s advice from 2005 has a number of still great games.

Telas has been great about keeping an eye out for Black Friday sales the last five years. The most recent sale was Part V.

What’s missing are your recommendations. Do you have a go to game for kids? Is there something awesome that needs to be ordered this week if it’s to arrive in time for Christmas? What gifts do you recommend for people shopping who aren’t familiar with roleplaying? The best advice will probably manifest in comments.

3 Responses to Shopping for the Roleplayer in Your Life