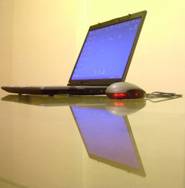 At this year’s Mastering Your GM-Fu seminar, RPG freelancer and TT reader Walt C. mentioned that he uses a PowerPoint presentation to do opening credits for his game sessions. I thought that this sounded awesome, so I asked him if he’d be kind enough to share his technique with the GMing community. Thanks, Walt!
– – – – –
While I was sitting in the “Mastering your GM-Fu” seminar at Gen Con, someone asked about rituals to use in order to signal that it’s time to game. Many good methods were offered, including the “sitting silently behind the screen” method, the playing of music, and the traditional “ask if we’re ready to play?” method. I offered one of my current methods, which was to create a PowerPoint presentation.

A few years ago, I acquired a flat screen monitor that I hooked to the front of my laptop, facing the players. While I’d intended to use it to show NPCs (I usually cast my NPCs as real people) and other information, it occurred to me that I could string some slides together and create an opening sequence that would grab the players’ attention and set the tone for the session.

While all of my presentations are a little different, they usually have the same features:

Moreso than the campaign title, a theme song really sets the tone. It can also provide context for your slides. I often include and time my slides to work with the theme song.

The player characters are the stars of the campaign and should be included. I usually have two-three slides of each PC, with his or her name appearing at the bottom of the last slide (unlike a real series, I’ll use the PC name rather than the actor/model’s name).

If a player hasn’t figured out what his or her character looks like yet, I’ll cast a placeholder until he or she does (sometimes, the player will go with what I used).

I’ll also slot in any recurring NPCs (those that show up in almost every adventure). These slides are NEVER as elaborate as the Stars (a subtle reminder that the PCs are the stars). These NPCs only get one slide.

These provide the bulk of the slides. This is very easy to do if your game is in a modern location; my current M&M game is based in Seattle, so I use a lot of Seattle landmarks. I’ll also include common locations: the bookstore/coffee shop owned by one of the PCs, the current theatre that the Queen Vampire acts in, etc.

Thematic slides can also be used in place of locations. Pictures of dark forests and rained on castles can help set the mood for a gritty fantasy campaign, or pictures of planets and starships can set the tone of a space campaign.

I’ll also usually throw in a slide of an NPC that the PCs have met more than once. Unless they are a Guest Star, I usually don’t give them a name caption and slot them separately from the supporting characters.

I tend to structure my campaigns like a TV series, so I’ll generally include an episode title (more generally, it’s an adventure/scenario title). An episode title can either act as a teaser for the session to come, or act as a memory prompt if the players are still in the middle of it (you could also add Part numbers as well, e.g. Four against the Chaos Lord, Part Three, and change them for each session). You might even try giving “session titles” rather than episode titles, which can help the players determine what is important to look for in the session.

After the episode title, I’ll usually list guest stars, using the supporting character format. This gives the players people to focus on when we start playing. If I really feel that I need to keep a prominent NPC a secret, then he or she will be left out of the presentation.

I’ll also throw in an end slide that includes the gaming group name (or reference) and year.

If I feel it’s necessary, I’ll let the final slide or slides recap important points from previous parts of the adventure. This would usually be accompanied by a hard copy version that can be referenced during play.

Obviously, the utility of the presentation depends upon the campaign. It is much easier to do a presentation of a modern day espionage campaign than a high fantasy campaign with lots of strange races. Slide pictures are usually appropriated from the web, but I’ve also scanned pictures and other information.

The size of my presentation really depends on the length of the song (I originally made them shorter, but players complained that they wanted to hear the whole song).

Creating a PowerPoint presentation can take a bit of time, but once you have the template in place, it’s easy to swap out episode titles, Guest Stars, new Stars, and other info. I usually monkey a bit with it between sessions just to change things up (a new picture of a supporting character, for example, or new animations).

I should also note that it’s not necessary to have a separate monitor. Simply playing the presentation for the players on your laptop screen (or desktop, if it’s in the same room) works just as well.

My players really love it, and I’ve found that it really adds something to the campaign. Try it out and let me know how it works for you!

17 Responses to Opening Credits via PowerPoint