My planning cycles for my current game are, for me, pretty short — usually one week. That’s actually a good thing, because it forces me to focus on the important stuff and helps me avoid getting bogged down in crap that won’t hit the table, but it does mean that I’ll take all the help I can get.

One thing I find helpful is having a list of adventure types (not plots) to choose from, and that’s the focus of this article. Below is a big list of broad adventure types suitable for a wide range of RPGs, genres, campaign styles, and groups — I hope it’s useful to you! 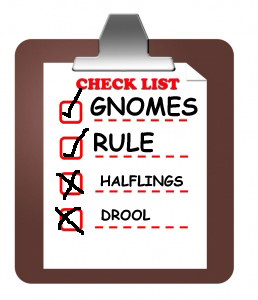 This list is like a menu: browse, find an adventure type you like, do some brainstorming on possible plots, and you’re off. If the first type doesn’t pan out, try a different one.

I got the idea for this list from the Decipher Star Trek RPG, which I’m currently running for my group. It includes a list of Trek episode types, which is a useful tool in trying to make my game feel like the show. It’s handy because it’s the broadest possible starting point — the first step on the road, the big picture.

The other thing I like about it is that seeing an option there makes me consider an episode type I might otherwise dismiss, like Trade in a non-mercantile campaign, and consider whether it might actually be fun for my players. The big list below works the same way.

Not sure what kind of adventure to run next? Start here!

(Many thanks to my fellow gnomes for helping me create this list, and to the Decipher Star Trek Narrator’s Guide — an amazing GMing resource — for giving me the idea.)

When I’m prepping for my Trek game, the the list is my starting point — I need a lot more than just an adventure type to plan out a fun night of gaming, and you need more than Gnome Stew’s list.

For my game, I also pick a broad type of conflict (like Man Against the Unknown or Against Man, another tool the game provides), consider the episode’s place in context (Will it be too similar to what we did last week? Am I on pace to reveal everything I want to be part of season one?), and then come up with an outline for what it’s actually about and what might happen.

But that starting point, the menu of episode types, is a big help when it comes time to start sketching out the next session. It’s not the same as a list of plots (for that, try Eureka: 501 Adventure Plots to Inspire Game Masters or S. John Ross’ free Big List of RPG Plots) — it’s broader than that, which is why I find it so useful. I hope you get as much mileage out of this list as I’ve gotten out of the Trek version in my game!

(Incidentally, I’m not inventing the wheel here: many RPGs include a list like this in some form. But I wasn’t able to find a broad, multi-genre, multi-RPG list that could be used for many different games, which is why I decided to write one. If this list leaves anything out, I’m all ears!)