Dragons In The Stacks 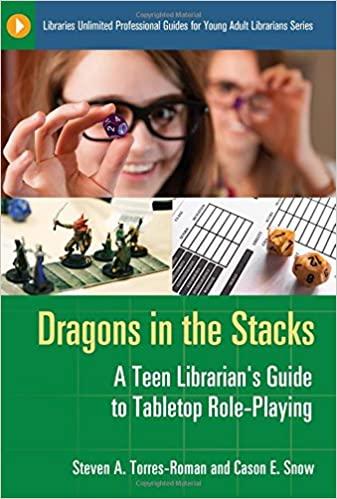 At Gencon 2015, a serendipitous meeting led me to spending some time talking to Steven Torres-Roman and talking about a book he worked on called Dragons in the Stacks — A teen Librarian’s Guide to Tabletop Role-playing. Steven gave me a copy to look over and I decided to review it for the Stew. Having spent time in my past working at public libraries, it was interesting to talk to Steven about the impact of tabletop role-playing games and their use in libraries. I’ve always been a fan of libraries and using them in my gaming life. Whether it is including gaming books in the collections, using the reservable rooms as a neutral space for game play, or librarians making gaming a key point of programming, there are a ton of ways libraries can intersect with gaming. So, to hear that Steven and Cason E. Snow wrote an extensive book on incorporating gaming and libraries, it made me quite happy. Here is a short review of Dragons in the stacks that might make you jump at the chance to start gaming at your local library.

Primarily, Dragons in the Stacks is a book aimed at teen librarians to help them develop collections of gaming materials and programs to support gaming. In the five chapters, it covers a brief introduction to the history of tabletop RPGS (very much like a compressed Designers and Dragons), a primer on developing a robust RPG collection from free and keystone RPG lines, the ways to use it at a library, how to develop programming around RPGS, and finally the bulk of the book (chapter 5, over 100 pages) is a rundown of various games and reviews of them. The reviews are based on criteria like complexity, support, popularity, versatility, how well they emulate a given genre, etc. and are all categories are ranked from 1 to 5.

So wait, why is this useful to me as a Game Master? Well, in much the same way that Designers and Dragons is a great read to make you think about other games and understand the gaming landscape and its roots, Dragons in the Stacks provides a well researched and condensed overview of tabletop gaming. Since it is aimed at Teen librarians, who may or may not be familiar with gaming but would want a good overview, reading Dragons in the Stacks provides an excellent way for a new player or a new Game Master to quickly come to speed on multiple types of gaming going on right now. The glossary section provides what feels like a scaled down, broadly focused version of the stew’s own glossary of RPG terms. This glossary section is aimed at describing things to people who have never played. Things like Point Buy Character Creation provides a short paragraph description that would fill in a new gamer or Game Master enough to give them a perspective on how it would work if their current game didn’t describe it.

The history of tabletop role-playing games chapter is also well researched and provides a very brief, yet complete, overview of gaming through the years. This in itself is important as new gamers have fewer connections to the roots of gaming. As the roots of the game industry get farther from the present, it’s important to be able to help new gamers get a feel for what was and how it shaped what currently is. It is important to be able to look at the big picture and see the trends that cause a change in the gaming industry, and Dragons in the Stacks provides a great overview of the history and present of the gaming industry, as well as good guesses at what the future might hold.

The selection and collection development chapters are less likely to be immediately relevant to most non-librarian gamers, but much of the content of the chapter deals with what are currently the big names in gaming and where you can find free rules to try out various games. The cataloging chapter is an interesting read, but likely of little direct relevance if you aren’t a librarian. In contrast to the cataloging chapter, the programming chapter is full of advice that a new Game Master could cherry pick and modify to their own use. The book even references Gnome Stew as a source for game mastering advice and talks about Never Unprepared and Odyssey.

The biggest section is the Guide To Games, and it is a great overview for many games that are out there. It covers many games that are older as well and may not be as popular. This is a strength fo the book, as it may lead you to new games that aren’t as well known but might be right up your alley. While this section doesn’t cover every game ever, it is a good overview and provides excellent, quick, insight into how a game runs, the mechanics it uses, and how much time/effort/resources it would take to get into that game with your group.

Dragons in the Stacks was probably not intended for the average gamer or Game Master, but it is a good resource for those looking to fill in gaps about gaming or help introduce others to gaming. The pricetag through amazon ($45.00) is more in line with academic book prices, but there are many sellers who have it for a little less. One of the nice things about how this is written and who it is aimed at is that it is intended for librarians. So, if you want access to the advice and interesting read, but can’t justify the $45.00 for your personal collection, here is what you do:

They may order it out of the curiosity bred by an interested patron, and that may spark the librarians to start building up a tabletop role-playing section if they don’t already have it. If you help them run games, then you will benefit by not only having this book to read and helping to build up an RPG collection in your local library, but you’ll also be seeding gamers for the future who will carry on and keep the hobby strong.

Dragons in the Stacks is a bit of an odd fit for most gamers who are already in the know, but it tackles the hobby from a slightly different perspective. It’s a great overview and a great primer to gaming for the uninitiated, and it might be worth it to highlight and hand to potential new gamers to get them up to speed.

You can paw through a few pages of Dragons in the Stacks on google books and form an opinion for yourself, but I would definitely recommend it as something to check out and see about getting in the hands of your local library.

As an added bonus, I shot a few quick questions to Steve and Cason, who obliged me with some answers about the creation of the book.

What prompted you to undertake writing this book?

What was your thought process when developing the criteria for reviewing various games? How did you choose which RPGs to focus on?

How well received has Dragons in the Stacks been amongst the intended audience of Teen Librarians?

What would you say is the most useful thing that a non-librarian Game Master can get out of this book?

How could a Game Master help their local library develop a gaming program or collection?

7 Responses to Dragons In The Stacks