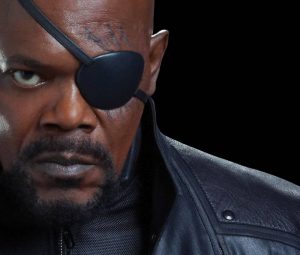 Would you want to make this boss angry?

They’re in it deep, way over their heads. Everything is falling apart around them and they need to figure out what to do to fix the problem, and do it fast. Back at home base, though, there’s someone in charge that could totally save their bacon from the fire, so why not give the boss a call to come bail them out? Why? Because Samuel L. Jackson costs way too much to bring in for more than a couple of cameos.

Wait, what? I can see the look of confusion on your face from here, so bear with me as I explain. As GMs, it can be frustrating to figure out how to handle the players, either purposefully or inadvertently, trying to circumvent plot by calling on a higher power to solve the problem for them. While it can be a viable solution on occasion, it’s not one that makes for a very interesting story. If the PCs are supposed to be the heroes, calling in the cavalry should only be used as a last resort, not a solution to every problem. Unfortunately, in my experience, many players will try for that easy solution way too often. The question for us GMs is how to keep the higher ups out of it without having the players feel like they’re being denied assets they would legitimately have access to.

(Note: I’ll try very hard to avoid spoilers for ‘Agents of S.H.I.E.L.D.’, but everyone has their own tolerance for spoiler information. You have been warned.)

This struck me a couple weeks ago as I watched the season finale of ‘Agents of S.H.I.E.L.D’. In some ways, the writers of the show have a problem similar to the one we GMs have. As a quick summary for those that haven’t watched the show, it follows a group of S.H.I.E.L.D agents led by Agent Coulson. The show got off to a disappointingly slow start, but after coming back from a mid-season break it quickly grew into its own. Deftly tying its story into the buildup and the fallout related to the events in ‘Captain America: The Winter Soldier’, it very quickly went from meh to Must See TV.

If the lead characters of the show were PCs, they should be able to call on S.H.I.E.L.D. for back-up and other resources, right? Heck, if they really run into some major problems, they should be able to contact Agent Coulson’s boss, Nick Fury. He’s only one sat phone call away, right? Unfortunately for the show, Nick Fury is played by Samuel L. Jackson and while he’s game for a lot of things, he still has a busy schedule and hefty salary requirements. A TV show, no matter its pedigree or success, is not going to be able to afford more than a couple of cameos from the BAMF himself, which is pretty much what the show got. His first cameo was just an amusing extra bit, but his appearance in the finale was just the pivotal type of role a boss figure should play in a game — he helped save the day, but most of the heroics were still up to the main characters.

For those of us running games and not writing television scripts, we need to find a way to make sure the players understand that they can’t turn to their organization’s leader for every little problem. There are several ways to reinforce this idea in character:

Your boss didn’t hire you so he could do all your work! A good boss is there to support the staff he’s hired, but he also hired them to do a job. If the PCs keep pestering him to help them out with things, that’s going to get awfully annoying for him very quickly and he should let them know it’s time for them to step up and pull their own weight.

The hero that cried wolf. Maybe the PCs do call the boss and she does send out reinforcements, but when they get there, the problem is easily something the PCs could have handled on their own. Not only could the PCs get razzed by the team that showed up to help them, the next time they call for help the boss might be less willing to take them seriously.

If they don’t want to do the job, someone else might. If the PCs keep talking about having the boss come help them out, it should be easy enough to convey the idea that there are some other people in the organization who would be happy to take over their job since they obviously don’t want it.

Since they can’t handle the little jobs, they’ll never get the cool missions. If the boss believes they have a history of slacking on the jobs she’s already assigned, it can be made clear to the PCs that they’re being passed over for some of the more interesting jobs.

There are also other creative ways to deal with the situation externally to the players. For example, what if the boss was suddenly out of the picture, either permanently or temporarily? Another alternative would be to have the boss turn on them and turn out to be an enemy. Either one is a good way to shake up the game and the organization the players are part of.

Whether their boss is a titled lord in a high fantasy setting, a high level executive in a power suit, a grizzled cyber mercenary with untold history, or even Nick Fury himself, the PCs can be shown that earning their boss’s respect and trust through initiative and independence is the best way to get what they want out of that job. Being prepared to redirect the PCs’ search for the easy solution is a good way to avoid having to blurt out, “You can’t afford Samuel L. Jackson!”

No, I actually haven’t done it, but there are times that I want to. Have you ever had to find a way to keep your players from relying on an NPC authority figure too much? How did you solve it?