Fallen London: Come Play with Me

The year is 1861, and London has been stolen by bats. Except no one says that anymore, except the Revolutionaries. Welcome to Fallen London. 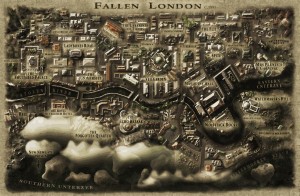 In December of 1861, Prince Albert, the Prince Consort to Queen Victoria, ruler of the United Kingdom of Great Britain and Ireland, died. Though his doctors thought it was Typhoid Fever that carried him off, it’s been speculated by modern doctors that it was more likely cancer or renal failure – but that’s hardly important at the moment. What is important is that during their twenty-one years of marriage, Queen Victoria loved Albert fiercely and deeply – so much so, that she never left mourning after he died. 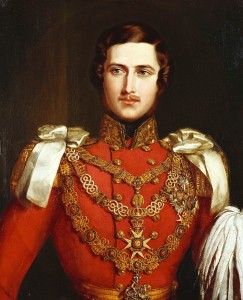 What if she’d had the chance to keep him alive?

Welcome to Fallen London, where The Traitor Empress sold London to a shadowy, inhuman set of creatures in exchange for her dear husband’s life.

The game picks up in 1891, where you’ve been unceremoniously thrown in New Newgate Prison for unspecified crimes, and must find your way out in the short introduction/tutorial in order to explore a world where London exists in the labyrinthine cavern sometimes referred to as ‘The ‘Neath.’ There is no sunlight, here, and not everything you encounter is human. You forge and break alliances with Devils and Spies, have trysts with artist’s models and struggling artists alike, all the while keeping your struggling head above the strangeness of the thing that’s become the heart of London, the Bazaar. 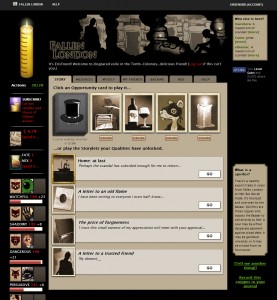 Fallen London is a browser-based choose your own adventure game produced by Failbetter Games. The game is played using a deck of randomly-drawn cards in addition to a set of constant, though evolving stories that can be played based around your current location. There are four main character statistics that can be leveled to open up new stories and are used to succeed (or fail, to hilarious and terrible result) at said stories. Watchful covers your observational abilities, allowing you to gain secrets around the city – rather helpful, as secrets of varying degrees of monstrousness are considered currency. Shadowy deals with cunning and subterfuge, giving your character an edge in sneaking and stealing. Dangerous gives your character a way to smash their opposition into little tiny bits, earning accolades in fighting-rings. Persuasive allows for charm and witticisms, assisting in seduction and coercion. Thankfully, all four stats aren’t mutually exclusive, and you can level each fully.

Of course, games aren’t terribly fun without menaces, and each of the four stats has a ‘menace stat’ that rises until something awful happens to your character. Watchful failures net you Nightmares – there are rather a lot of things in London that are best left unseen, and digging too deep makes for difficult sleeping. Shadowy failures result in Suspicion – you’ve picked the wrong pocket or been caught burgling a house, and your neighbors will talk. Dangerous failures, perhaps unsurprisingly, lead to wounds – when you lose a fight with a tiger, it’s not likely that you’d be walking away unscathed. Persuasive failures net you Scandal – your neighbors are still talking about your terrible flirting with the Curate’s wife.

If any of your menaces hits seven, something really terrible happens. You can get sent to the Royal Bethlehem Hotel, where you wander about until your Nightmares go away. You can get sent into Exile in the Tomb-Colonies, where you hang out with boring dead people until your scandalous behaviour is forgotten. You might end up in New Newgate Prison again and have to escape all over. Or you might die.

Did I mention you can die in the game? I should mention that.

Due to some stuff that’s so far into the game that it would be an awful spoiler if I were to mention it here, death isn’t necessarily permanent in London. Unless there’s not enough of your body to come back to, people in London generally wake up from being stabbed with minor aches and pains, and can go about their lives. There are two complications from this, though – firstly, if you die too many times, you’re going to be rather busted up, and it’s likely you’ll get shipped off to the Tomb-Colonies where all the unsightly dead people hang out, wrapped in bandages, having quietly boring and stuffy parties. Secondly, you can’t ever go back to the Surface.

Basically, the game is fantastic in nearly every way.

There are only two things I can think of about Fallen London that a player might find frustrating. The game can, at certain points, get a bit grindy. You’ll find yourself repeatedly clicking the button to re-play a story, whether you’re trying to grind up a stat or gain a certain luck-based item drop, and that can get tiresome. It becomes even more tiresome with the capped actions. You’ve only got a certain number of actions to play with (though it can be increased by spending real money), and they refresh at a rate of one every ten minutes. So if you’re the type to want to sit down and hammer out a game in a day, you’ll quickly tire. Even the devs have said that it’s meant to be played over time, in small chunks.

So with the bad out of the way, let me tell you about the good. At least, some of it, because I don’t know if you’d be willing to read thirty pages worth of my gushing about this game.

Let’s talk about the writing. Fallen London is a masterful set of stories, woven together with the common threads of subtle Victorian Horror and occasional fourth-wall-breaking. The stories are alternately hilariously funny and hauntingly creepy, building a rich and living setting from the talented keyboards of the writers. Since the only interaction you’ll have with the game is through the stories, it’s impressive how alive the city becomes and how much your choices can impact how you’re perceived and what options you’ve got during gameplay.

Other awesome things: you can play a gentleman. You can play a lady. You can play a “There are people walking around with the faces of squid – squid — and yet you have the nerve to waste our time with trifling and impertinent questions?” The game doesn’t care if you’re gendered, agender, gender neutral, or queergender. The game has romances to be undertaken, if you so desire, and regardless of whether you’re romancing a gentleman or a squid, a lady or a Devil, it doesn’t matter what gender you’ve picked to play as – any NPCs available for romancing are available to be romanced by anyone. Which is a bright spot of awesome. Even the romances themselves aren’t necessarily the standard options – the Great Beauty is a man, and the Barbed Wit is a woman, which lends a depth to the idea of actually romancing those NPCs.

Speaking of awesome, did I mention that Fallen London very purposefully stayed as far away from the ‘Everyone is Upper-Class and White and also has Consumption’ thing that so many games set Victorian-era London tend to fall into? You meet black artists and Mongolian princesses. The game is full of NPCs who aren’t thin and pretty white people. The game is conscious of its diversity, which makes the game feel more alive and more fully realized than having the same repetition of shades of Victorian paleness.

Anyway, the point is, Fallen London is an incredible game. People have made songs about it. There’s a whole host of fanart and blogs that curate material related to the game. There’s even a comic. It’s rich in lore that I’m not going to talk about because half the game is figuring that kind of stuff out, and I’m not going to spoiler all that. It’s got incredible writing that really makes the setting come alive. The character creation makes for a more immersive game, and regardless of the limited actions, you can cover a great deal of material in one sitting. Consequences are both not limiting, though an ever-present threat, and even when you go overboard, the game still gives you stories to play to get out of whatever hole you’ve dug for yourself. It’s a beautiful, brilliant game, and one that will keep you flipping cards and killing your friends for years.

1 Response to Fallen London: Come Play with Me