With a Bang: Ending a Campaign on Purpose (for the first time in 20 years)

This past Saturday night, my group played the final chapter in a year-long, 18-session Mage: The Awakening chronicle. It was one of the best campaigns I’ve ever run, and, in 20 years or so of GMing it was the first campaign I’ve ever ended according to plan.

Planned for the Very First Time

Up until a couple years ago, I’d never even been involved in a non-one-shot that had a planned ending. Every game I’d ever run or played in been done on the “Just keep going” model, and had ended for organic reasons: lack of interest, scheduling conflicts and the like.

Then I got to be a player in an excellent Stargate campaign that our GM had structured just like the TV show: each session was an episode (following the three-act model), the episodes strung together in story arcs — and the season had a defined endpoint, prepared for in advance. That was the first time I’d experienced that campaign model, and I loved it; I decided to do the same thing with my Mage game.

I’ve talked quite a bit about this particular game on the Stew, including covering the logistics of ending it: Ending a Campaign: Taking My Own Advice. Before that, it was the test case for my four-article series on running a roleplaying-intensive game (which kicked off with So You Want to GM a Roleplaying-Intensive Game, Part 1).

This time around, I’ll focus more on little stuff, and on how it felt overall. 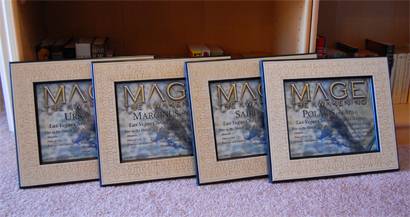 For starters, I knew I wanted to do something special for the guys as a way of saying thank you for playing for the past year. And I had a great model to follow: Don’s Stargate game ended with a “wrap party” — complete with custom hats, a Stargate cake and framed certificates for each of us. The whole thing was great, but it was the certificate that stood out for me. I still display it proudly on one of my gaming shelves.

I created these certificates in Photoshop, use a free Mage wallpaper from White Wolf’s site for the background and then adding the text. I picked up frames that I thought fit the tone of the game — the party’s HQ is the Venetian Hotel. 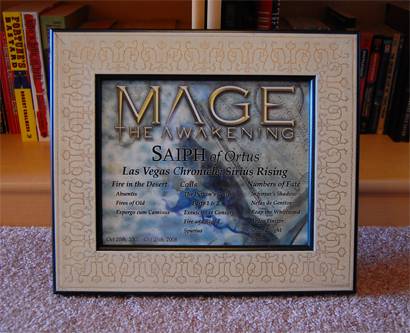 My PS skills are pretty shameful, but I thought the overall look was good. Each one features one of the PCs (Don’s character, Saiph, in this one).

I broke the campaign into three story arcs, each with several named chapters; that’s what’s listed from the middle down. 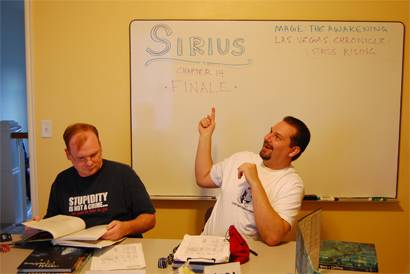 We make the most of the awesome whiteboard in Don’s game room. I always put up the chapter title for each session, and it was weird writing “Finale” under this one.

Prepping the session was weird, too — like I said, in 20 years of GMing I’ve never planned the ending of a campaign before. After using waypoints to plan out the last three sessions, this one was pretty straightforward.

We opened with a roleplaying scene — the continuation of an impassioned intra-party argument about what to do with a disturbingly powerful artifact the cabal found itself owning — and then rolled right into the climactic battle. 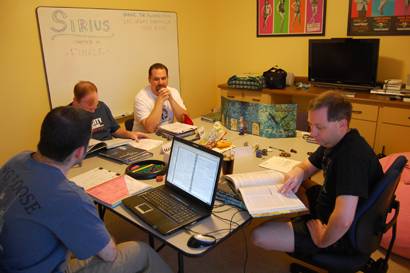 From the very beginning of the game, when I sat down to prep before the first session, I knew I wanted to lead up to a big, dramatic choice for the PCs to make — a choice with two obvious outcomes, neither entirely good or bad. I settled on the PCs being in a position to decide whether or not a magically-enhanced nuclear weapon — one capable of turning thousands of normal people into mages, and killing thousands more, maybe millions — was set off just outside Las Vegas.

As the campaign evolved, I actually didn’t do a very good job presenting both sides of the equation. But even though I think I over-emphasized the “stop the bomb” option, I genuinely left both options open until the final moments of the entire game. By the last session, it was pretty clear they were going to stop the bomb instead of letting it go off, but I wrote material for both options in my final adventure notes. 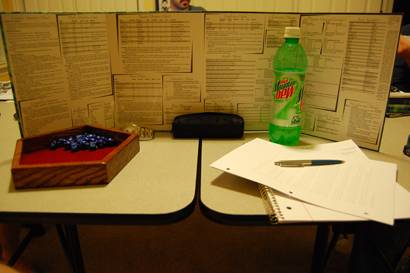 When game time arrived, I was nervous, excited and slightly relieved. This was a time-intensive game for me: we usually play for about seven hours per session, and it takes me 6-8 hours to prep each time. I was sorry to see the game end, glad we were leaving it (probably!) at a point where we could pick it up again if we wanted to, relieved to get a break from GMing and excited to see what happened, all at once. 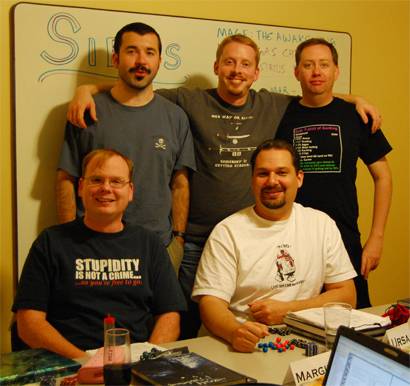 They stopped the bomb — sent it to the Abyss, actually, destroying a powerful Abyssal entity in the process. I hope they had as much fun with it as I did.

Plenty of loose ends were left open for the next game, and I wound up really happy with how it all turned out. A year was just about right for me: long enough to scratch my GMing itch, and to get in a solid number of sessions, but not so long that I burned out. I’m ready to go back to just playing for a little while, and we’re all excited about the prospect of trying something new.

It’s definitely not going to be for everyone, but based on this experience I highly recommend GMing a planned campaign like this at least once. 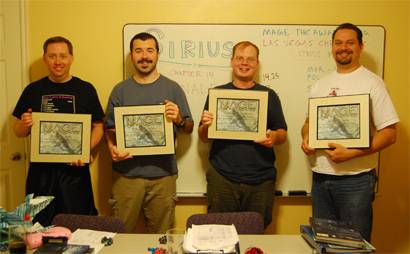 And thanks for reading — I hope this was at least somewhat useful to other GMs!

10 Responses to With a Bang: Ending a Campaign on Purpose (for the first time in 20 years)