When It’s Going Down In Flames, Tuck And Roll With It 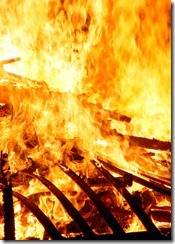 I had high hopes for my latest game. It was an ambitious idea, had a lot of player buy in, and I’ve done a lot of prep to make sure things run smooth at the table. It has been going okay, but some things just haven’t been clicking. Delays in being able to game have caused gaps, character’s have been at crossed ends in-game, and the general feel I was hoping for has slowly been ebbing away. The game isn’t bad, but it isn’t the epic life and death struggle for a city’s existence that I had hoped it would be. Instead of digging into the epic faery tale and story elements and coming up with unique solutions, players have been falling back into old ideas and treating things like an old school video game RPG instead of an old school faery tale. One player recently brought his new tablet to game so that he could take notes, despite the implicit rule we all agreed upon that mobile devices weren’t allowed as they would break the verisimilitude. The game isn’t crashing and burning yet, but it isn’t the game I started running. Phil’s recent series of articles have made me look at my campaign and wonder if I should end it or push on and try to bring it back to the original concept, trying to make it great.

But Then There Is The Third Option, Roll With It And Allow A Controlled Burn

Rather than cut the game off entirely or work to bring it back in line with the original concept, there is a third option that I’m going to try. I’m going to see what happens if I just roll with the way it is going. Like I said, the game isn’t bad, it’s just deviating away from the initial concept. It is much less epic journey of self discovery and more humans stuck in a new world, but still dealing with things like RPG characters, not real people, would. There is a mix of the original feel and this new thing that has emerged. Less, work to save the world and tweak your thinking to overcome your fey competitors, more discovering that magic exists and treating it like the players would if they suddenly learned that it existed in the world.Â  About half the players are still trying for the original feel, and a few just don’t get the concepts and themes being presented, even when efforts have been made to put things as plainly as possible. The players who are working within the original paradigm are slipping into the mindset of the other players, almost out of necessity.

Why out of necessity? Have you ever been in a D&D game, trying to roleplay out your character and grab all of the Game Master’s juicy story and plot, only to watch the player who is just there for the killing and rolling rush ahead into danger. Even if that isn’t the type of game you wanted, it’s the type of game that is currently, in this instant, being played. If you want to be part of the game, you’ve got to rush into combat or push against the tide.

When you are the Game Master and notice this type of thing going on, it’s hard to pick the correct path. In most games, you, as the Game Master, are partially responsible for what goes on at the table. You may have wanted and started running Game A, and most players are player that, or at the least Game B, which is as close as they get to your original vision. But if something is causing some of your players to be playing Game F, you’ve got some problems. You want it to be fun for everybody, so what do you do? Easy, you roll with it and allow a controlled burn? But how?

Ok, here is what I’m doing for my game. I’m watching for areas where the verisimilitude or the feel of the original concept is being broken and, on a case by case basis, determining if I should let that happen or not. If it is the sort of thing that threatens to decimate more of the game if allowed, then I put it out with the appropriate strategy — talking to the player, disallowing it in game, telling the player it just isn’t feasible, making it an appropriately hard roll, etc. If it is the sort of fire that will burn out and clear a path for something more fun, I’ll let itÂ  happen.

How do you tell? Well, that is all in your hands and very dependent on your game. Here are some situations I’ve encountered.

Fires I Put Out

The best of all rulers is but a shadowy presence to his subjects.
…
Hesitant, he does not utter words lightly.
When his task is accomplished and his work done
The people all say, ‘It happened to us naturally.’

One final thing about this, whatever fires you let burn or changes you make to roll with the direction the game is taking, do it invisibly. If you decide to start ignoring a house rule, just keep ignoring. Don’t point out that you are ignoring it from now on, unless there is some mitigating reason to. If ignoring the rule is the natural flow of where the game is going, it is better to let it just drift that way. When one of the players points out that we’ve been forgetting the rule, say ‘Meh, it was cramping things. Let’s ignore just that one from here on out.”. Doing it this way doesn’t stop the game, nor does it point out that you are fundamentally changing the nature of the game on them.

Final Thoughts
Rolling with the flow of things and letting fires burn is all about clearing things out of the way for more fun and enjoyment. You’ve got to determine what the right things to say yes to are, and what the right things to say no to are. Either way, you are dealing with things that might be destructive to your game. Letting go of some of the gravitas might be as dangerous as putting in tighter controls to contain it. If your game is seeing some drift, take a second to determine what areas you should let happen and what ones you should try to reign in.

6 Responses to When It’s Going Down In Flames, Tuck And Roll With It