In my last post, I went through the GM/MC’s Principles and the characters that my players made for our Apocalypse World game. Today’s post is all about the first session, a Day in the Life with those players, plus one.

An Addition the Party

Between sessions, we gained another player, so we kicked things off with his choosing of a playbook. We also re-did all of the Hx for the characters. That was for a couple of reasons, the foremost being that we did Hx as we wrapped up the previous session and most everyone didn’t remember the details. The second was to make sure we rolled in the new character.

Like I said, the first session doesn’t start off with much, if anything, planned. We knew a few different things from some of the moves and playbooks the players had chosen. Those things lead to questions, which is what most of the first session consists of: questions. The things established by the playbooks and moves are the starting points for those questions.

A quick recap (along with what the important ones mean).

Those are the basics, our starting points. From here, we started the session and I started asking questions.

The questions asked at the beginning of the game aren’t prescribed, but there are definitely a few different things that need to be established:

What kind of apocalypse happened? What broke the world?
Where is the hardhold located?
What are the details about the hardhold?

Those are the places we started. We didn’t have a particular pattern to the questions. We just started discussing things, working to come up with answers to the questions. Each piece of information made the world a little more fleshed-out and real.

The apocalypse itself we determined was some kind of technological signal, one that drove a certain portion of humanity over the edge. Not zombies, but rampant psychosis, people killing each other and breaking the world down until the signal just… stopped. Now everyone lives in the world that was left behind.

The hardhold itself is located on the Mississippi river, in an abandoned warehouse. The area around it is run down, with other warehouses nearby. The whole warehouse, Warehouse 141, is a 24-hour market. That’s how it keeps going. It’s small, and not easily defended. The way it stays safe is that it supplies the region what it needs.

Take a look at the maps below and you’ll see the basic setup. 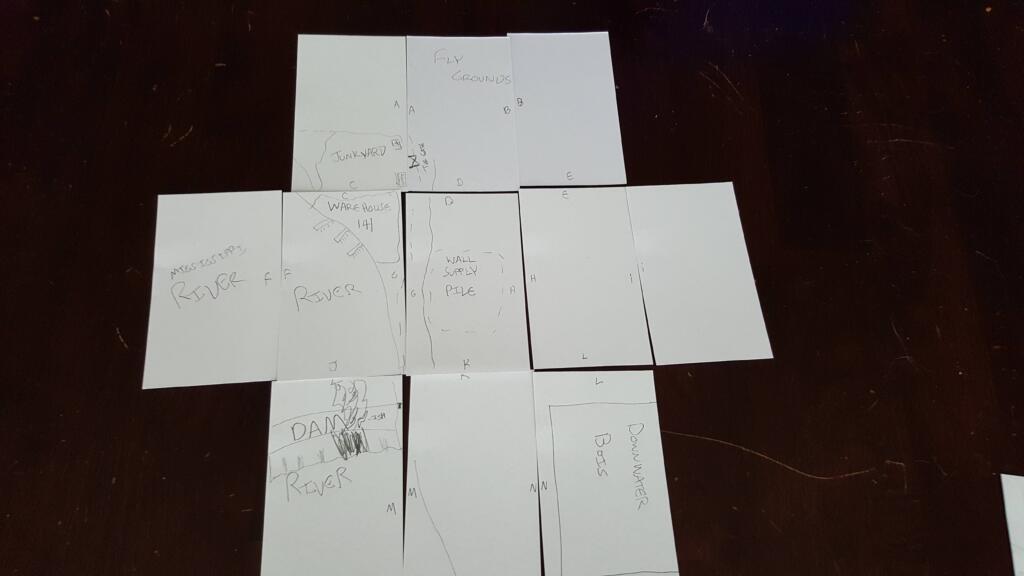 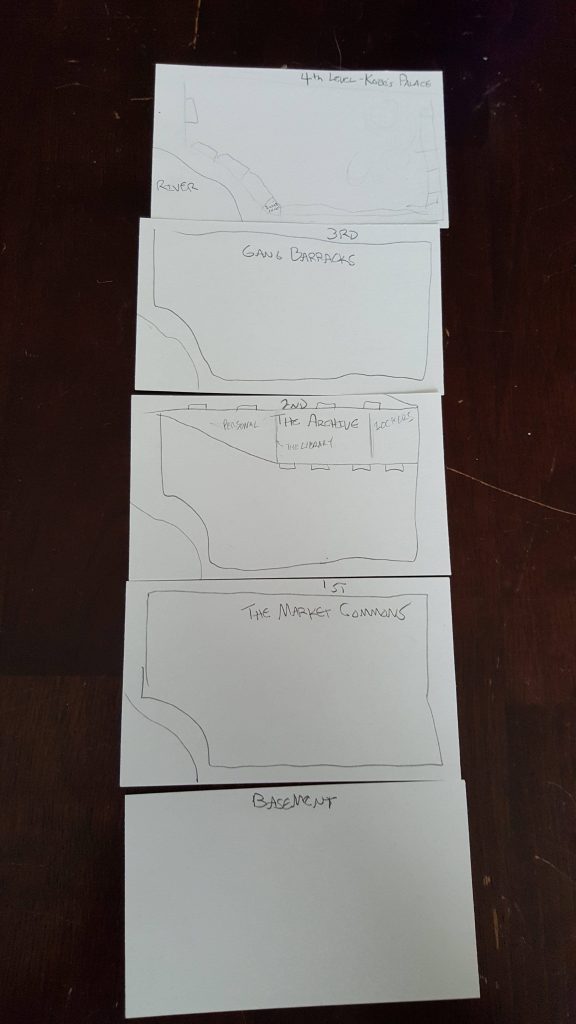 One of the Principles is “Draw maps like crazy.” I’m no artist, but I did my best with these. One of the things I wanted to do is make the map kind of modular. So I used a bunch of index cards and labeled the edges so I’d know what went next to what. The other upside of this method is that if something changes on one of the cards, like in a big way, I don’t have to erase and re-draw; I can just make a new card.

The other details we came up with are better presented in context, so let’s get into the session re-cap, shall we?

The session kicked off with a super-armored bus rolling up outside of the entrance to the junkyard. Jason and Trench were doing their usual thing that morning, and the bus was definitely unexpected. From first glance, the super-armored bus had no one in it. Even the “people” on the top of it were no more than mannequins.

Meanwhile, a couple of gang members named Tinder and Grinder (yeah, we did that) showed up at the Archive, looking twitchy and weird. They asked Smithsonian for… something undefined, and they pulled weapons. Smithsonian and Omi Wise (his co-librarian) managed to get them out of the Library, though one of them was bleeding on the market below (Grinder, I think).

Trench came inside with news about the bus and Kobe came out to investigate. They asked Dune to take care of the mess inside.

We’ll stick with Dune and co for now.

Dune managed to talk his way into the Archive, convincing Omi Wise to let him in to see whatever it was that Tinder and Grinder were looking for. Turns out that they were looking for an old tube amplifier/circuit board, something to do with amplifying radio waves. Also, Dune grabbed a vial of white powder that rolled out of the bleeding Grinder’s pocket. No idea what that is yet.

Dune and Smithsonian then took Tinder and Grinder down the elevator to the basement where the holding cells are. That’s when Warehouse 141 shook, the sound of an explosion heard in the distance, and the elevator stopped halfway down.

Kobe headed out to investigate the bus. They’d have sent their 2nd in command, but Jeanette was off trying to cut a deal with the gang to which Warehouse 141 owes protection. Kobe didn’t approve, but Jeanette is strong-headed.

The bus itself hadn’t moved during this time. They looked, came near, but… nothing. Then the ground shook, a plume of smoke rose from the area of the dam, to the south, and Kobe ordered their gang members to open fire on the bus. Bullets spanged and popped against the armored hull, to no effect.

Then, Kobe looked up to where their lookouts were supposed to be, and saw… nothing. Kobe’s player had made a move, trying to control the gang, and got a result that indicated some of the gang would betray them. This was that betrayal. The bus? No bullets actually hit it. There were small explosives rigged to the sides to make it look like there were, though.

Everyone then high-tailed it down the the dam. This is after getting Smithsonian and Dune out of the elevator. Jason brought two cars from storage and everyone rolled down.

Jason and Kobe got there first, with the others not far behind. Near the dam, there were bodies everywhere. And the dam? The intermittent source of power for the entire Hardhold? Near-ruined. And the bodies? Trench showed up, and having seen no living targets, went after a dead body with her nail-studded club. Unfortunately for Trench, none of the bodies were bodies, but instead were more mannequins, rigged with explosives.

Trench lived, and Kobe got everyone back to Warehouse 141. Jason stayed near the dam long enough to know it would take a long while to get things back up and running. And the bus? Kobe got the back of the bus open and moved to the front. There, they found Jeanette, strapped with explosives, tied to the front seat. That’s where we ended the session.

Where It All Came From

I’m not great as session prep. It’s why I like to improvise sessions. The problem is, as the years have gone on and I’ve found myself with less time to prepare, I’ve become over-reliant on my ability to wing things. But Apocalypse World is changing my mindset in an important way. One of the Agenda items is “Play to find out what happens.” I’m all for that. To make it work, you have to ask questions. The MC/GM doesn’t just decide what will happen: they follow the Agenda, the Principles, and they ask questions about things they think might be interesting to see.

This works for any game. If you put yourself in the mindset of wanting to see how the characters react, and how things will unfold without your needed to prepare everything, then questions are where it’s at.

This post is getting long, so I’m going to wrap it here. Next time, we should be another session deeper into the game, and I’ll show you the questions I used to make my Fronts and Threats. In the meantime, what questions do you have? Something about the system? The session? Life in general? Ask and I’ll try to answer.

1 Response to Welcome to Warehouse 141