They are three magic words, as distinctive as the starter’s horn for sprinters and swimmers at the Olympic Games or the command to “Start your engines” at Indianapolis Motor Speedway.

But for gamers, especially those who play Dungeons &Â Dragons, Pathfinder and other games in the d20 sphere, it carries the same significance. 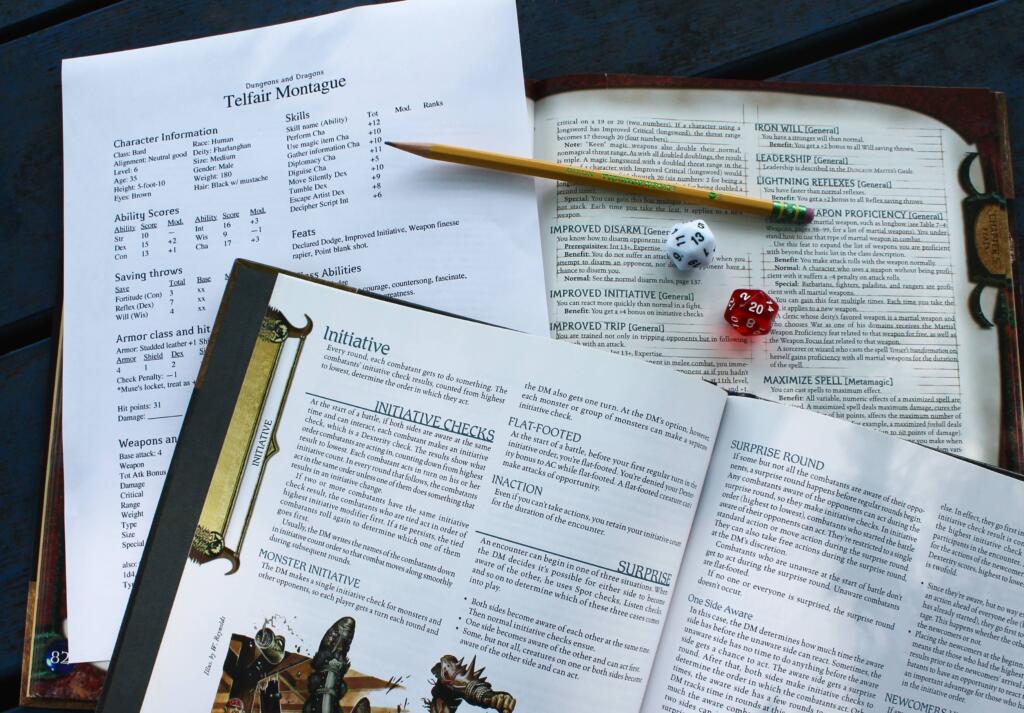 I can still remember the first time I played using the Third Edition rules. It was a hot summer day, gathered around the dining table of Ken, who was serving as host and game master. I was playing Telfair Montague, a bard.

(Go ahead, snicker. I loved that Third Edition bard. So what if he can’t hit anything with an AC of 15 or higher. He oozed charisma, baby!)

I kept anticipating our first combat. But there was a great deal of scene setting, as the players toured Hommlet, got rooms at the Inn of the Welcome Wench, then visited the druid in the grove and then sought out a gnome potion-maker, who’d gone missing. Looking back, I wonder if my eagerness to engage in some combat was showing.

Roleplay is wonderful. But so is roll-play. (I know, I hear you thinking: “If you were so eager to bash something, play a fighter or barbarian next time …”)

Then the mill caught fire. Cultists! Tieflings! Those guys were bad news! I drew my blade and announced that Montague was wading into the fray.

Initiative, blessed initiative. I’d taken the feat Improved Initiative. (I know, another choice that isn’t optimal for a bard. But I wanted to go first, dammit!)

After playing the “Declare and Resolve” initiative system from Second Edition for so long, the d20 method of a roll modified by Dex was refreshingly simple. The fact the feat Improved Initiative added a +4 to that result made it a no-brainer for me.

I could move in. Take the first thrust. On the next move I could bounce back out, deftly avoid the opponent’s attack of opportunity, then start strumming my lute to boost the others’ attacks. Or I could select a spell that would aid them.

By going first, I could set the pace and style of combat. I was still learning the system. Not all my choices were good ones. But I did see, as we were using miniatures on a grid, how going first allowed me to be active rather than reactive — which was the usual state under the old declare and resolve system.

While it was explained that in this combat system all the players’ actions occurred simultaneously in a given round, it was hard to deny that going first certainly appeared to mean “going first.”

And I loved it.

As a GM over the years, I’ve called “roll for initiative” perhaps thousands of times. It’s a different thing, from the other side of the screen, assembling the troops for battle. For one thing, you’re rolling on behalf of the NPCs and monsters, as well as jotting down the order of initiative. That little bit of bookkeeping, regardless of the combat tracking method you employ, can be daunting at times.

But even now, as our group’s roleplay becomes more nuanced, our play style more mature, nothing beats a call toÂ “roll for initiative.” You see the players’ eyes light up. You see them reach eagerly for their dice. You see them scan their character sheets, looking for that spell, weapon or magic item that best fits the situation.

I’ve never had a crowd cheer when I call “roll for initiative”, as what happens when Wizard of the Coast’s Chris Perkins runs for an Acquisitions Inc. demonstration game. But I understand the mixed feelings of impatience transformed into excitement when it occurs. The people in the audience know what it means to be at the table, know the same joy of reaching for the dice, readying for battle; making a mental note of everyone else’s rolls so they can remember their turn in the order.

Everyone has a game element they love. I’m pretty sure that mine — hearing the call to cast the die for initiative — is shared by many. There are ways to run a table — even in D&D — that doesn’t require it. But for me, it’s such an intrinsic element I will sometimes call for it during social encounters too. It keeps order at the table and it puts the players on full alert.

And I have to confess, despite my natural penchant for fairness, I’m not above occasionally swapping out NPC and monster feats and making sure at least one of the adversaries has Improved Initiative.