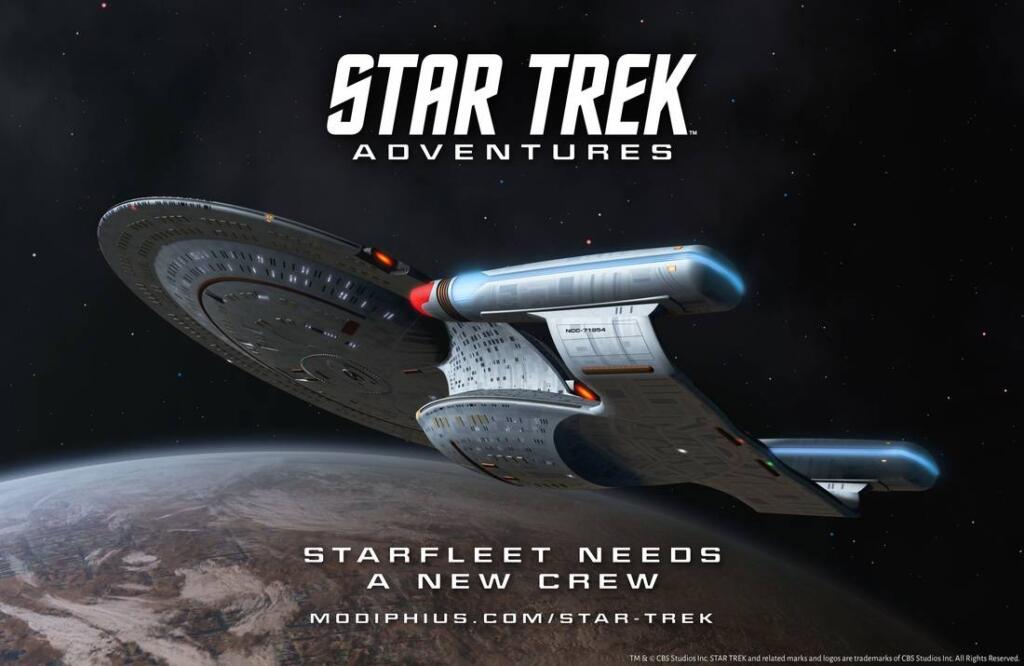 “Gnome Stew Guest Author Keith Garrett donned his red shirt and gnome hat to go out and get us an interview with Chris Birch about the new Modiphius Star Trek game. Beam in andÂ boldlyÂ check out theÂ interview Keith brought back from his away mission! – Boldly Going Where Gnome Ann Has Gone Before John”

What a year for Star Trek fans. We’ve got a new movie, a new series nearing production, and now a new Star Trek roleplaying game. The game will be called Star Trek Adventures, designed by Modiphius Entertainment. Modiphius plans to release the game in Summer of 2017, and in their recent announcement said that it will cover the original series, Next Generation, Deep Space Nine, Voyager, and Enterprise.

Modiphius provided some good information in the press release and on their website (http://www.modiphius.com/star-trek), but we had more questions, so we reached out to Chris Birch, Modiphius Entertainment’s publishing director.

Keith Garrett (KG): Will Star Trek Adventures be in the form of a single book, or separated into a player’s guide and GM’s guide? Will it cover all eras at launch?

Chris Birch (CB): At the moment we’re thinking of one core book, but there will be Division books that expand character generation, say for more detailed science adventures, as well as providing the GM with loads more relevant support, plot seeds, etc. We’ll also have books for each Quadrant that introduce other playable races, empires, etc.

KG: Your website mentions that “the core rulebook will focus on playing human and alien Starfleet characters.” Can you tell us which Starfleet aliens will be playable on launch? 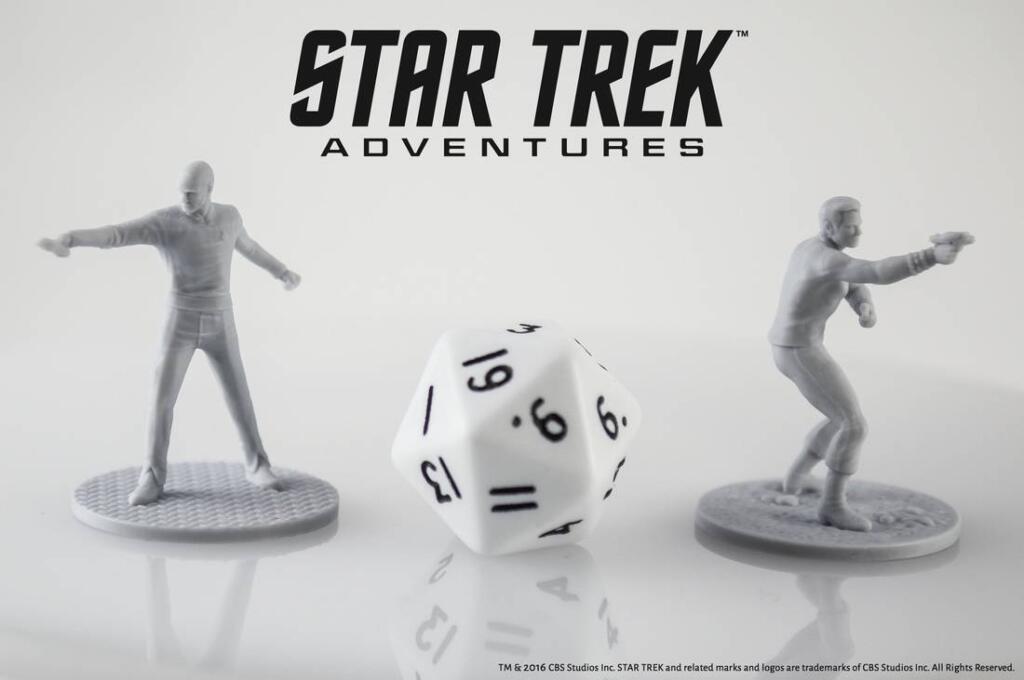 CB: We haven’t decided yet–of course there’s lot of them so we’ll focus on the more popular ones, then add more in each of the Quadrant books.

KG: Do you expect to publish setting material in books divided by era (original series, next generation, etc.), or combining those in the same books?

CB: We intend to include the material in the same books–so the Division books will cover different equipment by era (we’re really focusing on two–the Original Series and the Next Generation Era) and the Quadrant books will cover key events and changes in technology or empires between the two main eras.

KG: Can you talk long-term plans? How many books do you want out at the end of, say, a 5-year mission?

CB: We’re still debating whether we’d split the supplements into the departments like Command and Engineering, or focus on wider perspectives like COMMAND and OPERATIONS. You can expect Quadrant books for Alpha, Beta, Gamma, and Delta. The big question as to whether there will be a Klingon book is easy–yes, there will, and it will introduce Klingon-focused campaigns. Of course we’ll have campaigns and regular adventure releases, and I suspect some kind of ship manifest.

KG: Your press release mentioned that players in the living campaign will be assigned to ships, and that this will affect the play experience. How will ship assignments be handled? Will ships group players by region, or philosophy, or something else? How many ships do you expect to have in the living campaign?

CB: Those that sign up at events like Gen Con, Essen, Dragonmeet, or our monthly Modiphius events in London will be able to select their ship. Otherwise when people sign up online we’ll make an assignment based on their Starfleet application. There will be four ships: the USS Lexington, a Constitution class like Kirk’s Enterprise in the original series era; then USS Venture, a Galaxy class; USS Bellerophon, an Intrepid class; and USS Thunderchild, an Akira class all in the Next Generation Era. All will have a slightly different experience–for example, the Bellerophon will get a lot more science and mysteries to explore, whilst the Akira will have the potential to get into more conflicts–though it will be down to the players what they actually do.

KG: Why did you decide not to use Kickstarter for Star Trek Adventures as you did (to great success) on many of your earlier games?

CB: I believe that for this version of Star Trek to be a true hit, to attain a long lasting presence in retail, we have to work right alongside retail to build the foundation for the game. Whatever you think of Kickstarter, there is still a reluctance within retail to support it, and we wanted to make it clear right from the beginning that retailers are going to be central to our launch. In fact we have some fun ideas to make the pre-order exciting for fans and retailers so everyone wins. 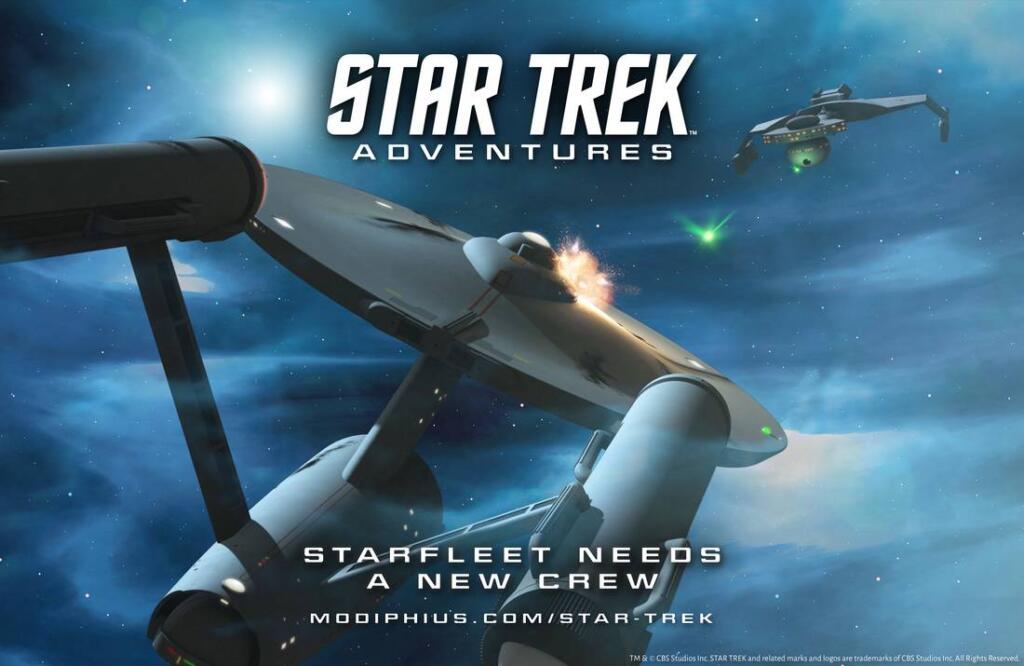 KG: Are there any plans to tie in with the new series, Star Trek: Discovery?

CB: It’s not part of the license; however, if it covers any parts of the TOS or TNG eras then there’s going to be nothing stopping groups from using those stories since Trek is Trek.

KG: Why will the game not cover the recent J. J. Abrams-produced reboot movies?

CB: Again it’s not part of the licence. As above, if you want to play Abrams Enterprise and crew there’s nothing stopping you.

KG: Will you explain how your geomorphic map tiles will work?

CB: You don’t need to use miniatures in the game at all; however, many people like using them, and there will be a chapter called Away Teams which provides rules for ship boarding actions, colony rescues, and much more. Alternatively, use the tiles in your existing roleplaying scenes to show where characters are when the action heats up. You can expect Federation and Klingon ship decks, lost colonies, strange alien ruins, and much more.

KG: Can you tell us what your approach will be to the issue of keeping one gung-ho player from trying to dominate the spotlight by playing the captain?

CB: Not all games will be the bridge crew, and even when you’re playing the captain and department heads the captain has checks and balances. Star Trek is not always shown as being military authority–often the bridge crew speak up and use their extensive knowledge and skills to recommend courses of action. A wise captain listens to his experts. Authority comes with responsibility, though, and there are consequences to breaking the Prime Directive, or bad decisions, so the position of captain is a tough one.

We’re making the effort to ensure it’s fun to play in the lower decks, as Away Teams of experts, Ensigns, or crew.

KG: It’s been a long time since we had an active Star Trek roleplaying game. What can you tell us about how this came about?

CB: Star Trek is a major license and there’s a lot of hoops to jump through to secure something like this. Not every company likes working with licenses, or has the knowledge to secure them, so that usually explains longer periods like this. Perhaps people didn’t feel a new version was needed in the intervening years. The thing is the shows remain on TV, getting constant broadcasts, and with the new films there’s a resurgence of interest in exploring the final frontier, so I guess the time was right for us now.

We took some time, showing what we could do, negotiating and so on. It’s not something we could do from day one, we had to show what the business was doing with other licensed games. I’m still pinching myself though. 😉 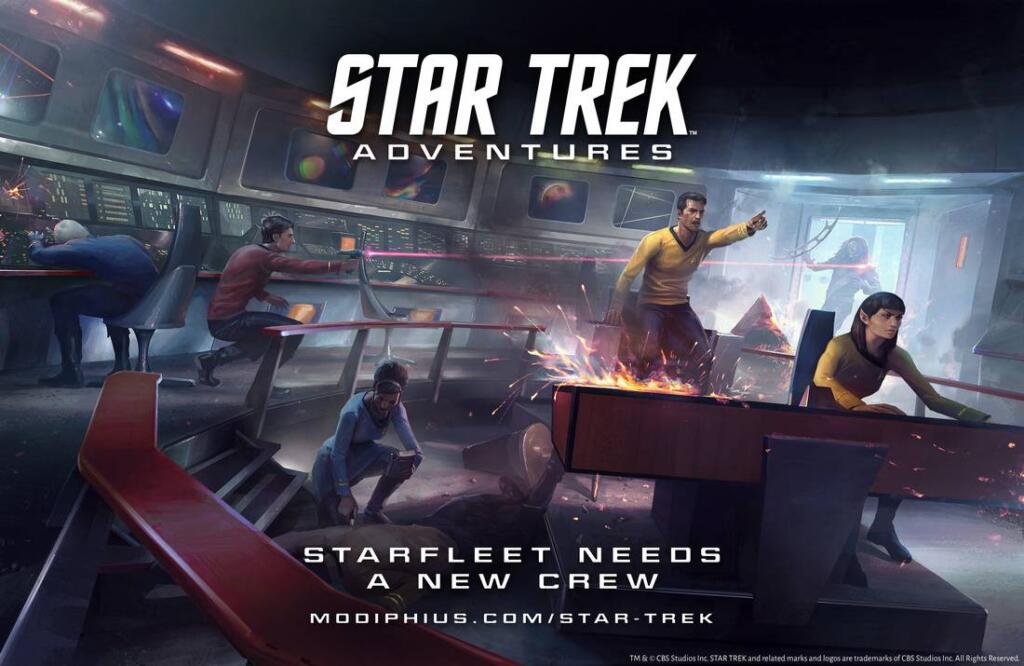 KG: As your website mentions, Star Trek Adventures will use Modiphius’s 2d20 system. Have you had to make any adjustments to the system to capture the feel of Star Trek?

CB: Yes in fact we’re rebuilding it from the ground up around the core. It’s somewhere between the Conan version of 2d20 and the John Carter of Mars version, which is really 2d20 Lite. We’re making sure it “feels” like Star Trek first.

KG: There are gamers out there now who are playing Star Trek games using other systems, either previous official Star Trek RPGs or more general systems like Fate and Savage Worlds. What is it about Star Trek Adventures that would be most likely to convince those players to try out the new game?

CB: We’re working hard on all the aspects of Star Trek. It’s not about blasting the nearest Klingon with your phaser on kill setting. Star Trek is full of scientific mysteries, diplomatic issues, moral dilemmas, engineering challenges, as well as full-on action and conflict. Often key issues are called into question like the Prime Directive or personal relationships, and we’re trying to bring that out with the system in simple ways.

KG: We wouldn’t be so cruel as to ask you to name your favorite Star Trek series or captain, since that would probably make some percentage of Star Trek fans hate you. Instead, we’ll ask this: Why is Star Trek better than Star Wars?

CB: Haha–well it has to be Kirk, I think. I always love Patrick Stewart’s performance, and let’s face it having a Brit on the bridge is amazing, but I grew up with Kirk’s voyages and that will always stay with me.

I think it’s like this, Star Wars is this awesome experience every few years that is about a galaxy wide story, but Star Trek is the voyage we go on every week with a single crew. I feel it’s more personal and particularly explores a lot of important issues like race and politics within a safe environment.

Star Trek has been there with us through the stories of the various Enterprises, Voyager, or DS9 through five generations. I think both fill different gaps in our sci-fi yearnings–though personally I would equally like to fly an X-Wing as much as captain the Enterprise!

What about you, Lieutenant Gamer? Are you looking forward to another Star Trek RPG? What are your hopes about its contents? 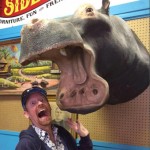 2 Responses to Interview With Chris Birch About Star Trek Adventures