The personal computer made preparing game handouts easy. Type something up, download and apply a nifty typeface, print it out and present it at the appropriate moment. All good.

But there’s something ineffable about doing a handout by hand. The homemade quality – the craftiness – can put a stamp on your on game.

Adding a touch of calligraphy is one way to do this. Here’s the materials I have at hand: 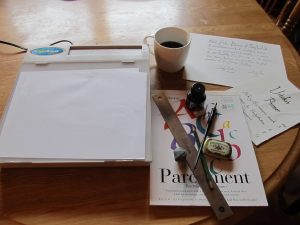 You can buy a stylus and pair of nibs for around $5. The ink is a little pricey, and even a small bottle will start out around $5. But it lasts for a long time if used judiciously.

Some folks, I know, like to add some authenticity by using regular paper, then staining it with coffee and heating in the oven to create the crinkled, ancient look, which is a fine thing to do. I prefer to drink my coffee, however, so the $6 for a tablet of parchment paper is worth it.

The other things you probably have laying around: a pencil and a straight-edge to draw guidelines on your paper, and an eraser for removing those lines. (I prefer a kneeded eraser, only because it doesn’t leave shavings, but your mileage may differ).

Now I happen to have a light table for other purposes, but it works wonders here because I can put ruled paper beneath the document I’m working on. This saves me the time of having to draw my own guidelines. It also provides a nice writing surface to work on.

Now here’s the beauty of “calligraphy.” Yes, there are many books and guidelines on how to do very stylistic letters in the Roman, Unical, Copperplate, Black Letter and Chancery formats. And if you want toÂ  take the time to learn those and apply them, that’s wonderful. (Just do a web search for those terms and you’ll have plenty of examples at the ready). 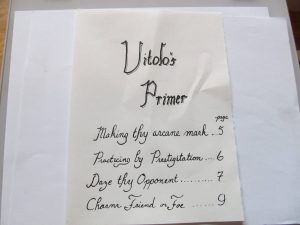 A page from the much sought-after “White Book.”

But basically, “calligraphy” is just writing. Remember that cursive script you had to do as a grade schooler? (As I recall, Lisa B. had the best penmanship in my class). Well, that’s more than serviceable for handout being prepared by you for your game table.

Here’s a couple I did. One is the first page of a sought-after book of enchantment spells that’s been making its way around the environs of Steffenhold (my homebrew world) for some time now. My players know of the tome – “Vitolo’s Primer” – as the “White Book.” 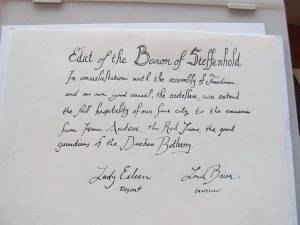 Who’s signing the baron’s documents these days? Maybe someone ought to check that out.

The other is a simple edict issued by the baron of Steffenhold granting hospitality and privilege to a squad of knights known as the Red Lions, which is loyal to the Duchess Bethany. Players would note that the document was not signed by the baron, but by his daughter-in-law and the castellan. What does that portend, I wonder? (Well, as GM, I don’t have to wonder, but the players might.)

The beauty of a handout in roleplaying games has always been their two-fold effectiveness. One, it gives the players a tangible entry into the scenario, an opportunity for immersion. Secondly, it’s a souvenir, something the players can take away from the playing session. Hopefully, it’s a good memory, and one that will prompt their return to the table for even more adventures.

Have you had any experience with calligraphy? Do handouts work in your games? Do have have a story about a favorite handout? Please share below.

15 Responses to Troy’s Crock Pot: There’s something about black ink