At our last roleplaying meetup, we cast about for a good game. We had kicked around the idea of playing Diaspora on the message board, but no one had studied enough to lead everyone through the process. Or so we thought… until we agreed that building a cluster together sounded like fun, and decided that we’d share the responsibility instead of relying on a GM to guide us.

So four of us (Bryan, Brian, Will, and me) sat down and created a cluster. Bryan and I had read the book a few times before the session, but Brian and Will joined based on our descriptions and hadn’t had a chance to read the rules in advance.

What is Cluster Generation?

In some ways, cluster generation is like the Dawn of Worlds minigame that Matthew reviews in the linked article, but with much less system. Because it has fewer rules for resolving conflicts, it requires more social consensus to make everything link up.

Cluster generation is collaborative setting building, with some random prompts and structure to guide you. We came up with an interesting setting that accreted through our contributions; none of the us would have created an environment like this on our own!

I started to say that cluster generation is collaborative world building, but since we’re in space, we’re actually generating several solar systems, all linked together along jump paths. System generation begins with each player rolling four fudge dice three times in order. Fudge dice have 6 sides: 2 marked minus (-), 2 plus (+), and 2 blank (0). You add them up, with + equal to +1, – equal to minus one, and blank equal to 0. So ++-0 = 1.. The first total is the system’s technology, the second is the system’s environment, and the last is the system’s resources.

Bryan generated the first system, given his greater familiarity with the game. He rolled a technology of -1, an environment of -3, and resources of +2. We recorded this as T-1,E-3,R+2.

We went around the table twice, generating a total of eight systems. As we rolled the dice, we kicked around ideas about what circumstances might result in such a system. It’s incredibly open ended; a system might have an environment of -3 for many reasons–in Boulder’s case, it turned out that it was because the solar system was just a collection of rocks like our asteroid belt, not a planet at all. One dangerously unstable moon might have been an alternate justification of a -3 environment.

We ran into a hiccup for our star system–none of the systems had a technology of more than 1! Since it takes a technology level of 2 to make ships that can hop between the stars, that’s an problem for a space game. Fortunately, the authors foresaw the issue and have a catch-all rule; if no systems are generated with a tech level of 2 or more, you take the two systems with the highest total and lowest total of all stats, and change them to a tech level of 2.

Now that the 8 planets had their stats, we rolled to see how they linked together. This is a cunning little system, generating hubs and branches, making some places central and others remote. After rolling the dice a few times, we came up with a cluster that connected like the picture below. 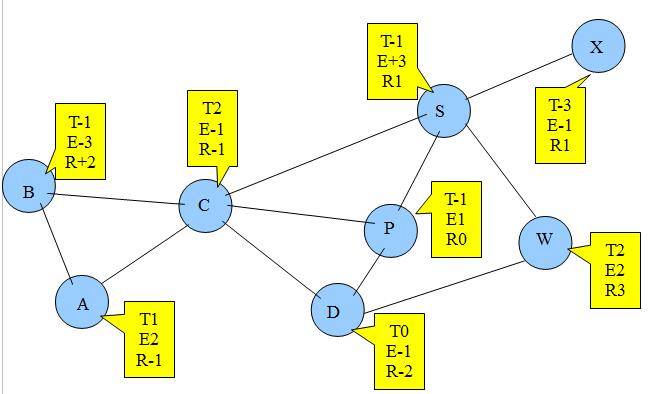 We wound up deviating from the process the book lays out, with real consequences. Instead of giving each system its own two Aspects, then adding a third Aspect about its relationship to its neighbors, we leaped ahead and assigned Aspects to the systems to cover both inherent and relational traits. That was a mistake–the worlds were too fluid and incomplete, and it took a lot longer to stitch things together, trying to do it all at once. If we generate a new cluster in the future, I’ll definitely pay attention to the rules and assign two inherent Aspects to each system first, and worry about relational aspects after the worlds are more coherent.

In our game, the first system generated was Boulder. Bryan described a giant asteroid field–a wide belt around the sun, without significant planets anywhere in system. It’s a hard scrabble, unpleasant place to live, a mining colony with a lot of prisoners doing the labor, but it’s a lucrative place–with resources of 2, it has valuable exports.

In conversation, we sketched out a rough history of the cluster. It paralleled our discussion of the worlds and their relationships, but it might have benefited from waiting until we had eight solid system concepts, instead of the half-sketched system ideas that we prematurely linked.

Creche is the homeworld of the cluster, and is completely dominated by bickering corporations. (The details swung throughout the session; one giant mega-corp was initially proposed, and different corporate/government blends were considered along the way. In the end, it was Will’s planet–while he appreciated us chiming in and snowballing ideas, his was the final word.) The corporations ruined their homeworld in their push to space and competition to found colonies. One corporation, Wheeling, found a jump lane from Desolation and began covertly investing resources in the lush system at the far end. They confronted the corporate council on Creche and negotiated outsized political power, much like the veto wielding members of the UN. We waffled a bit on the scope of the conflict/secession of Wheeling from Creche; originally talking about Wheeling/Creche as similar to the US/Britian relationship shortly after the American Revolution.

Aspects are one of the trickier things to get right in FATE systems. You want something descriptive, pithy, and interesting. Interesting aspects are one of the hardest things to get right–and it can be one of the easiest things to miss when boiling table talk down into a record/stat form. The book gives great examples of how one set of system values can be interpreted and written up in four compelling ways. These are our rough notes and proto-aspects; I suspect that we’ll refine them when we turn to character generation–or just take a day or two to let things simmer and settle.

We also noticed the widespread limited technology and decided that that’s probably a result of their history; Creche limits what other systems can develop and maintain to prevent future breakaways (like Wheeler). Wheeler seems to buy in to the same “keep the natives ignorant” arrangement, which seems to contradict their anti-tyranny claim. That fit the feel were were aiming for; this is no white-hat versus black-hat setting, with a lot of sketchy but valid justifications.

Austeria(T1,E2,R-1):
– Playground of the rich and famous.
– Large Ag plantations.
Boulders(T-1,E-3,R2):
– Life is hard and short; most who come here want to leave.
– Mining colonies are scattered across the system-wide asteroid fields.
– Many miners are prisoners from Creche, sentenced to hard labor.
Creche(T2,E-1,R-1):
– Corporate bureaucracy stifles everything.
– Struggling to maintain its colonial empire.
– The world is like a downtown; the place you go to work and make money, but not where you want to raise kids or retire.
Desolation(T0,E-1,R-2):
– The desert makes them strong
– They fight to earn what they lack
– The contract is king
Pilgrim’s Rest(T-1,E1,R0):
– The “quaint” first colony–nothing goes on here.
– Ihose with skills or ambition are drawn to Creche
Solace(T-1,E3,R1):
– One gas giant is orbited by several lush moons
– It’s a balkanized neutral zone, with the moons divided between various corporations (including Wheeling)
– Temp World: Employees are only permitted to serve for four years before they’re shipped out
– It’s the gateway to Xori
Wheeler(T2,E2,R3):
– Wheeler II is lush, ripe for exploitation; with factories concentrated in domed outposts on Wheeler I and III.
– “We’re close knit, cunning rebels, resisting Creche’s tyranny”
– Striving members of the Corporate Council
and Xori(T-3,E-1,R1):
– We drive out men into the forest; only the strongest return
– Only the priestesses know how to refine the anti-aging drug
– The spice must flow
– It’s a matriarchy, led by ancient but physically youthful women, who practice the old ways.

It took us surprisingly long (about 4 hours) to knock out our cluster. [We had hoped to complete both cluster and character generation in a session, but we should have figured in the learning curve.] I like the setting that we came up with. It’s nothing I would have come up with as a GM, but it has enough of my influence that I already want to see how things develop–and that’s before I have a character to go exploring!

It will be interesting to see how we flesh out the cluster–and doubly interesting to see what characters we come up with to explore this place. I enjoyed it as a stand alone “game” [though cluster generation is more a series of creative prompts than a game], but really want to see if it makes for interesting, involved characters. We’ll see!