Troy’s Crock Pot: Inside the mind of a trapper

I had the occasion recently to spend the day at a Boy Scout winter encampment. This is where Scouts test out what they’ve learned in a fairly harsh environment. (Not hostile, mind you, just harsh, as in cold).

There were activity stations set up across the state park, which the Scouts had to reach by sled. Then when they were there, they took part in whatever activity was designated. 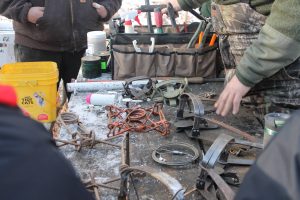 So, here the Scouts demonstrated stuff that would be Adventuring 101 to any group of player characters. They had to start a fire with flint and steel, hoist a pack out of reach of an (imaginary) bear and raise a tent pole with ropes.

If anything, it reinforced what I have long believed, that Use Rope is still a skill the player characters shouldn’t get to hand-wave. Unless your character knows knots like a sailor or a scout, I doubt they would have been successful at these many exercises.

The most intriguing demonstration was the one by a group of fur trappers. They displayed all the tools of their trade before us. If you are an outdoors sportsperson, maybe such devices are an everyday thing. But this was the first time that I had gotten to see a demonstration of trapping in a practical manner.

What impressed me most, though, was the mindset of the trappers. The fellow doing the demonstration picked up a fist-sized trap, held it up, and said: “This is why I love the challenge of trapping. These little guys (indicating past trophies by their fur pelts laid out on the table) have all of a forest or a praire to run in. And all I’ve got is this two-inch square trap. That’s the challenge. I have to put my two-inch square where they will step into it. Not an easy thing to do.”

That mindset was new to me, or at least, I hadn’t considered it. It certainly made me think about the mindset of characters and monsters who have a reputation for setting devious traps. Do kobolds and kenku and wily gnoll rangers have the same mindset as this trapper? Is it really a matter of out-guessing your prey? It was certainly worth pondering.

It’s application in designing dungeon adventures was obvious, however. Before putting a trap on a dungeon map, I need to really consider the objective of the trap-setter. Say I’m a kobold, who is thinking:  “The adventurers have the whole dungeon to run around in. But the challenge is finding this one spot that will let me snare them.”

And then picking it.

Don’t despair, adventurers. I also saw how Scouts could — even if they weren’t carrying a 10-foot pole — fashion one by lashing smaller poles together. And with this, they could spring a trap that was set more than 10 feet away.

That is, if they successfully made their Use Rope check.