Troy’s Crock Pot: “Campaign Frames” for “Princes of the Apocalypse”

Question: As game master, do you ask your players to come over and play “Dungeons and Dragons,” or do you say, let’s play “Airship Defenders of the Forgotten Realms”?

In other words, does presenting a specific campaign arc, with stated objectives for character types and a plan to emulate a certain genre of adventure serve everyone better than a generic, “Let’s play D&D”?

While there are certainly times it is OK to say, “Let’s play D&D,” I thought it would be worth exploring how being specific can provide a table experience that helps better meet everyone’s expectations.

The July 31 podcast episode of “Ken and Robin Talk About Stuff” was a discussion about how those two game designers compose “campaign frames” for their games.

As they describe it, campaign frames provide a narrow thematic focus and apply a recognized fiction or film genre to a game. For example, they said the original Tracy Hickman treatment of Ravenloft would be the Dracula campaign frame applied to a baseline Dungeons and Dragons game.

As another example, Kenneth Hite’s recent Kickstarter, the Dracula Dossier, got its start as a campaign frame for his espionage game Night’s Black Agents. It is based on this compelling premise: “In 1893, a visionary spymaster in the British Naval Intelligence Department launched a plan to recruit the perfect asset: a vampire.”

Being primarily a D&D game master, however, I thought applying the campaign frame concept in a structured format would be helpful. 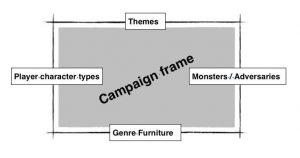 As I envision it, each campaign frame has four parts: Theme, Player Character types, Monsters and Adversaries and a catch-all I’ve labeled Genre Furniture.

And as an exercise, I’ve been brainstorming some campaign frames that could be applied the D&D published campaign book “Princes of the Apocalypse,” a reboot of the Elemental Evil mega adventures.

Here is one for your consideration. The others are available as an attached pdf: frameshandout.

Airship Defenders of the Realm

Theme: The same elemental forces that power the wonders of the age — flying machines and other pulpy gizmos — are being yoked by religious fanatics intent on establishing a new order.

PC types: Rogues, alchemists, mechanics, techo-wizards and spellcasters with an elemental bent, as well as some fighters who favor two-fisted solutions to problems.

Furniture: Airships, of course, as well as gear-driven “magic” items, ray guns; when you see an instant where a monster is serving a purpose that a machine might work, think about swapping out.

8 Responses to Troy’s Crock Pot: “Campaign Frames” for “Princes of the Apocalypse”