While gamers love traditional, dungeon-type maps, they are certainly not the only possible graphics options. Â Background images, area maps, and player handouts can enhance any gaming experience. Â Online virtual tabletops (VTT’s) make including these types of images easier than ever. Â And they won’t eat up a dime of printer ink. Â If you are not an online GM, you can still present these types of images to your players through a laptop screen or tablet. Â Here are some thoughts on each type of image and how they enhance play. 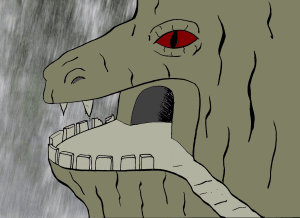 Remember Colorforms? Â A box of Colorforms gave you a background, clingy plastic people, props, and the opportunity to tell your own story (that last part sound familiar?) Â Background images in your game can do the same thing. Â You might use a long shot background image (say of a volcano or an island) to set the scene or the mood. Â Leave it up on the screen for roleplaying or other non-tactical encounters.

Close up images such as the dragon tomb entrance shown can be used for combat situations. Â They let players to see things a little closer to how we interact with the world every day. Â However, a GM will have to estimate distances, if that is needed for your game. 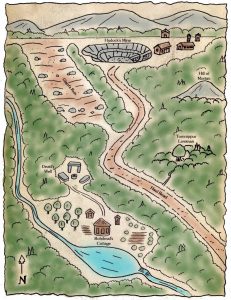 Area maps can be uploaded to a VTT and then expanded to whatever size you need. Â It offers a few advantages. Â Players can wander wherever they choose or the story leads them. Â This increases player choice (always a good thing). Â It can also serve as a combat map, if you blow up the map large enough. Â For example, it took me an hour or so to create the map shown below, and we got about 3-4 hours of play on it. Â Keep the area the map covers to a manageable level, though. Â If you try to cover an entire kingdom, you won’t be able to use it as a playmat.

Obviously these kind of maps are more suited to narrative style combat rather than gridded combat. Â However, you can easily include another map for any particular encounter. Â For example, you might want to create a small dungeon map if players wish to explore the hill on the right side of the map. Â It is only generally indicated.

Some VTT’s offer a spot to load player handouts. Â The GM may even be able to take control of the screen, and show these to the players at a particular moment. They will also be available to players at all times (even between sessions) for general reference. Â Here are some thoughts on things to include in that section.