THE ONLINE EDITION: GOING OFF THE VIRTUAL MAP 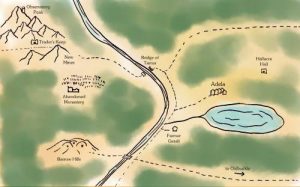 Players love to go off the map. That’s one thing that separates traditional roleplaying games from computer games, the ability to try anything. In a face to face setting, there are a number of ways to handle players going “off map.” You can quickly draw a map on a clean piece of paper, wipe off your battlemat and start fresh, or move some terrain pieces and an oatmeal box to represent the changing scene.

It can be harder to do this when using a virtual tabletop (VTT). As a GM, you have to find or create your maps beforehand, then upload and scale them. Unless you are playing play-by-post or pure theater of the mind, it’s difficult to do this in real time during a session. However, we don’t want to limit our players’ choices too much. They have the right to go “off map” if they choose. Let’s look at a few possibilities for VTT’s. Even if you don’t run an online game, you may still find some food for thought in this column.

Big Maps
Using a big map gives players lots of choices. For example, if you are running a “dungeon” (space station, abandoned warehouse, etc….) you can map out the entire area, upload it, and let them wander where they like. Even simple things like forks in a tunnel give them choices. If you like to end each session with a big finale, don’t worry about them finding the last encounter too soon. Just move the MacGuffin or the Big Bad to whatever room they enter about a half-hour or so before the end of your session.

If you go with a big map, keep your file size in mind. Some VTT’s limit the size of image files, and large files can take too long to upload anyway. To keep your file size manageable, consider shrinking the overall size of the map. Also, many painting programs allow you to lower the image quality of your map. I usually shrink my maps down to about 1000 pixels wide or tall, and reduce the image quality to about 90%. Once loaded into the VTT, I enlarge the map. If you plan on printing your map at a later date, just be sure to save the original file under a different name before you do any manipulations. These minor compromises in size and quality help a lot and will not affect the players’ experience. (And if anyone complains, ask if they would like to GM next time. Shuts them up real fast.)

Big maps can be a bit more difficult for wilderness and town areas. Think about trying to map the area within one square mile of your home. To keep your sanity, you may need to limit the area that you map, or suggest that some paths are actually longer than they appear on the map.

Sandbox Planning
Another option is to map several areas ahead of time. You can upload them and put them on different pages or tabs in your VTT, then use them in any order. This gives players more choice as to what type of adventure they want at any given session. This is sometimes called a “Sandbox” approach.

Sandbox planning requires a great deal of work from the GM up front. However, if you map and stat out three or four adventure areas, it may give you a break in the future. Have a little extra time this week to get ahead? Go for it!. You may need it that week when the kids have their school concert (and karate, and dance, and library activities, and it just goes on and on).

Another thing to consider in Sandbox play is that you don’t want to waste your planning efforts. If players don’t do the locations in the order you had hoped, you may need to plant clues there to get them to the other locations next time. If you want your campaign to have an overall storyline, be prepared to move some encounters to the other maps. You are still giving them choices, while keeping the overall story arc intact. This is sometimes called “Island Design Theory” and there is a great column on it .

Whiteboarding
The first year or so, we played using the online whiteboard Twiddla. You can upload maps to Twiddla, or use it like a regular whiteboard. Many online VTT’s also incorporate drawing tools, so you can use them as virtual whiteboards. When players go off the map, just clear out an area and draw away. In this manner, your maps no longer have an end. Also, you can usually overlay a grid if you need that for combat.

There are only a few downsides to this method. First, it can be tricky to draw with a mouse. If you have a PC drawing tablet, that can help you produce better maps on the fly. Second, it does signal to players that they have gone “off map.” Whether this causes an issue for your players will depend on your group. Finally, these kind of maps require a bit more imagination from both players, and a bit more e description from the GM. That’s not a bad thing, just something to keep in mind.

Next Week
Here’s one last method for dealing with players going “off map”. It’s called “Next Week.” Sometimes you just have to say “I’m not prepared for that right now, why don’t we go there next week.” If you want to be more subtle, simply tell them that they find nothing interesting down that particular tunnel and hope they head back. You might also have an NPC suggest that a particular location is a dead-end. While you don’t want to limit player choice too often, you won’t always be ready to deal with every choice in an interesting way. Most players will cut you a break. Then take their thoughts and use them for your next session planning. Let them do some of the brain work.

Concluding Thoughts
A lot of the techniques for dealing with “off map” excursions apply to face-to-face tables as well. After all, the computer screen is only the delivery method. While you may not be able to accommodate every request, these tricks are some ways to keep player’s choices meaningful.

What did I miss? What methods can you suggest for off the map play? Let us know below.

4 Responses to THE ONLINE EDITION: GOING OFF THE VIRTUAL MAP