A Home Base for the Ethereal Plane 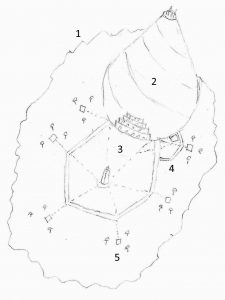 I was doing some prep recently (gasp no!) so I figured I’d share. Here is a base located on the ethereal plane for your high magic adventures.

Reasonably closeÂ to the center of the bizarre geometry of the planes, the city of Media is a large trading center and rest stop for dimensional travelers of all sorts.

1. The Rock: A huge rock floating in the gray fog of the ethereal plane. It’s surface is rough and blasted and full of all sorts of pockmarks, caves and hidey-holes. While smuggler’s caches, monster lairs, and the like almost certainly contain riches, few venture out of the safety of the city.

2. Tear of Yggdrasil: A massive teardrop shaped piece of amber, embedded into the floating rock. It is assumed that it must have fallen off of a world tree somewhere. How it ended up embedded in a rock floating through the ethereal plane is anyone’s guess. In ages past, a palace was carved into the giant piece of amber. Even older is the spiraling pathway cut into its side leading to the tip which has been carved into a flat plane with upthrust spires of amber like some sort of primitive temple.

3. Media: A large hex shaped city surrounded by a thick stone wall. In the center of the city stands The Anchor, a huge pylon carved with glyphs and runes that helps keep the rock from wandering too far or from rolling to either side. Six main roads radiate from The Anchor to the corners of the wall. The wealthy of the city mostly dwell near the palace, with tradesmen and the middle class centrally located. The areas nearest the wall mostly house farmers and shops that cater to their needs.

4. Temple of the Rejoining: A few decades ago, a group of priests arrived in Media. Claiming the Tear of Yggdrasil was a sign from their god that their pilgrimage was over, they petitioned the noble houses of Media for a wing of the palace to set up their temple, but were rebuffed. Undaunted, they gathered enough money to erect a second wall outside Media proper and built a temple there. While they wait for their god to rejoin them at their temple, they minister to the people of Media.

5. Mushroom Plantations: BeyondÂ each of the gates in the city wall is a raised road leading to a small hilltop fort. Below the roads and forts are a sticky morass of imported earth and garbage and waste collected from the city. Great forests of mushrooms grow in these mires tended by the poorest residents of Media. Mostly housed in the forts, a few of these farmers and loggers reside in the outskirts of the city proper. The forts also hold a small number of soldiers who protect the workers and ostensibly serve as a defense force for the city.

2 Responses to A Home Base for the Ethereal Plane