The Essence of Awesome

Everyone wants to be awesome, to find that moment of perfect cool. Maybe the exact style of awesome varies from person to person but make no mistake about this, each player that comes to your table, from the min-maxers to the esoteric actors, wants their character to do or be something cool, or interesting, or powerful, or great, or… You get the idea. While most of the work for this lies in the players’ hands, don’t underestimate how important it is for the GM to facilitate the moments of awesome.

Now, some of you might be asking what should be expected of a GM to make the PCs awesome. After all, shouldn’t a character’s cool factor fall into the player’s hands or at least in their dice rolls? The GM sets up the world and its NPCs, so the player is in control of what their character does in the game. This is true to a certain degree, but sidesteps the fact that nothing happens in a vacuum. When the characters DO things, the world should react. That’s where the GM comes in. 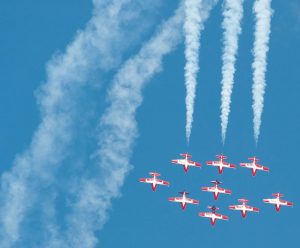 Do something cool. Do a barrel roll!

Whether the player has a spectacularly awesome success or an abysmal failure, the GM frames how the result affects the world around the character. This allows the GM a multitude of opportunities to help show how that character shines. Was it a social situation? Describe the positive reaction of the NPCs. Was it a feat of dexterity? Point out to the other PCs how astounding that move was. Was it a combat roll? Share the look of fear in the enemy’s eyes as the blow lands. Was it a strange device that they needed to activate? Describe the magnitude of the accomplishment as they finally get it doing what they need. All GMs have to do this to a certain degree to keep the game moving forward, but I’ve seen far too many that give their players a lackluster reaction to moments where the characters could shine.

If you’re not used to giving a bit of panache or flare to PCs’ moments of epicness, it can be a bit intimidating to start, but I’ll let you in on a secret: a little bit of this goes a long way. Players are often very good at building up who their characters are in their head, so they only need a little bit of affirmation from the GM and the other players to carry them through. Throw each player in your game a couple of moments each session where their character shines and you’ll have them hooked. This works for both the experienced, outgoing player that already likes narrating how amazing their character is, all the way to the shy, newer player that is still hesitant about speaking up. In fact, several times I’ve had a shy player come up to me after a game and thank me for an awesome time when I wasn’t even sure they were enjoying themselves. Just a couple moments calling out how their actions were affecting the world was enough to make them feel good about the game.

Each player may have a different idea of what awesome is for their character, so it is important to have at least a vague understanding of what they’re looking for. Some players want to kick ass in combat while others may just want their character to stand out in some way. In a recent convention game, I had a player who was perfectly content to spend most of the game describing how eccentric and absurd their character was. This wasn’t exactly helping the game move along, but he wasn’t doing it in a way that hindered the game either. He seemed to be having fun in his purple-sky world, so I just reinforced how successful he was at some of the strange things his character was doing. It all came full circle at the climax of the game when his absurdity actually saved a couple of other characters. You don’t want to encourage behavior that detracts from the game for the rest of the players, but it’s okay when players thrive on different things in the game.

Most good GMs know to do this on an almost instinctive level, but for the rest of us it’s worth taking a look at how we help the players and their characters fit into the game. After all, everyone wants to be awesome. Let’s see how you can help them get there.

7 Responses to The Essence of Awesome