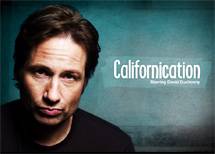 Alysia and I have gotten sucked into Showtime’s Californication, which is much better than its premise — washed-up writer has lots of one-night stands while trying to fix his life — suggests, largely because of David Duchovny.

Before we started watching it, I read a review of the pilot that stated that Duchovny was the only actor who could play this role in this way. And the reviewer was absolutely right: Californication just wouldn’t work with anyone else playing the lead. Duchovny has just the right mix of charm and sleaziness, sex appeal and regular guy-ness, to pull it off.

The opposite of a tailored campaign is one where the scenarios would be pretty much the same no matter who was in the party. Running a published module is a good example of this: Barring a few mechanical changes you might make to accomodate character abilities, you could slot in any other group of PCs and the adventure itself would be nearly identical (though the outcome might be different).

A tailored campaign, on the other hand, should be like Californication for every single PC: Without this specific group of characters, the campaign just wouldn’t work. Not only does it revolve around them, but their backgrounds, personalities and accomplishments are part of the fabric not just of the world, but of the adventures themselves — it’s written for them, and it would be a completely different game without them.

12 Responses to The Californication Principle