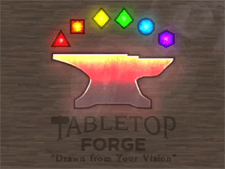 The launch of Hangouts on Google+ has been a boon for virtual gaming. While I’ve never tried G+ Hangout gaming myself, I’m curious about it and I know folks who do. (My reason for not trying it yet is schedule-related.)

Tabletop Forge is an app specifically designed for virtual gaming on G+. It includes map functions, die rolling, whispers, and other features designed to make this type of gaming easier and more fun. Currently in open beta, it’s been very well received.

To take the software to the next level, the TTF team is currently running a campaign on Kickstarter. Here’s why:

Tabletop Forge started as a hobby project. While it is perfectly usable in its current form, we want to take it to a professional level. The primary use of the Kickstarter funds will be to purchase art assets to use directly in the application. Instead of hunting for an encounter map for that surprise tavern fight, we want you to be able to just choose a tavern map you like and load it directly in the app. We want tokens for all the generic fantasy creatures (like goblins), as well as modern/sci-fi tokens like guards and ships.

Their Kickstarter has been going like gangbusters: At the time of this writing, it’s raised over $18,000 — and the initial funding goal was just $5,000. We think this is a cool GMing tool designed by a cool bunch of folks, so we’ve teamed up to offer a special deal to backers.

Get Tabletop Forge Goodies + Masks and Eureka in PDF 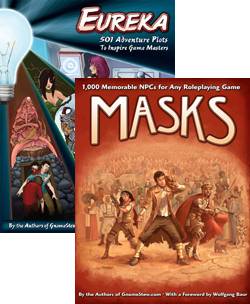 The $20 reward level in the TTF Kickstarter is the “Full Backpack,” which gets you access to beta builds as the team improves the app, as well as terrain, objects, and tokens exclusively for backers.

The Masks + Eureka PDF bundle retails for $26.95, so getting them through Kickstarter makes them just $15 — 45% off. If you’re already a backer, you can upgrade from Backpack level to Bag of Tricks level and score a great deal. And if you’re not a backer, this is an excellent way to get TTF bundled with our GMing resources.

The Tabletop Forge Kickstarter ends on July 9, so you’ve still got some time to take advantage of this option if it sounds appealing. As I write this, more than 25 people have already done just that.

If you have questions about Kickstarter, Tabletop Forge, or how this all works, fire away in the comments!