Illusions of Depth: Factions and Teams

Places are cool, but it’s people who make a world. Welcome to the next installment of Deep as a Puddle: streaming NPCs. Or at least creating several interlinked puddles. Whatever the analogy, we’re making groups of NPCs, while still trying to keep them interesting, with individual details and motivations. If you wind up with guard #2, you’ve gone down the wrong path. 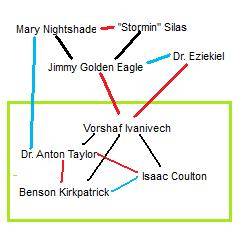 This trick is for building NPCs in thematic batches. You’ll find that creating a few related NPCs can produce interesting interactions, relationships, and depth–often in much less time than building the NPCs one by one. There’s also nothing to prevent you from sketching the groups this way, then delving deeper into individual NPCs with other techniques.

Why Make NPCs in Groups?

Don’t your players need large organizations devoted to evil? Enemies large enough to cause significant wrong? This approach fills out the adversary’s organization, deepens it by adding nuance, develops NPCs, and provides hooks that the PCs can take advantage of.

The inspiration and original development comes from Chris Chinn’s Conflict Webs and several older posts he used to develop the technique.

No matter what game you’re playing, or setting the characters are exploring, people are going to organize themselves. A medieval game features guilds, guardsmen, nobles, merchants, peasant groups and many more potential organizations. Modern and sci-fi worlds are more prolific yet; a pilot’s guild, professional associations, the junta’s inner circle, a church’s steering committee, battalion command, or even a corporate board of directors all form organizations that make a world feel more comprehensive. Superheroes need globe-spanning conspiracies to oppose; Viper in Champions or Cobra for GI Joe. The greatest need, though, stems from intrigue filled games. World of Darkness games–with their sprawling cabals, tight bonds of blood, packs and septs, traditions, clans, and other groupings–benefit greatly from the technique.

Jot down an influential group (the Tremere), or the name of someone influential (Duke Jonathon). A few inches away, jot down another name (Ronald Higginbotham of Cirus Corp), group (the Lasombra), or other character to interact with (the Lady of the Lake). Draw a line between them. Choose a relationship and write it between them. This can be precise (splintered from) or vague (antagonistic). An easy technique is to roll a fudge die: + means they get along (friendly), blank means professional/transactional or obligation/duty, while – means discord, dislike, or hatred.

Now add another name, group, or faction a few inches away from an NPC or group already on the page, draw a line to someone, and set a relationship. Repeat a few times, and you’ll have a group of people who have a history and tone to their interactions. 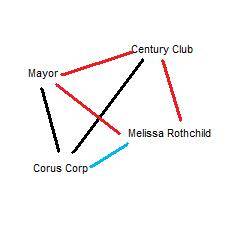 From an aside in Collaborative Conflict Mapping:

For longer term play, I generally like to take any given leader/representative of a faction in a scenario and give them two voices- one who leans one way on an issue, another who leans the opposite way (The ol’ Kirk-Spock-McCoy triangle) and you get some interesting stuff out of that.

So let’s try that with our example city.

The Mayor doesn’t run the city alone; he has a relationship with Brand, the council president, and Sam, his trusty administrative assistant. If disaster has struck and the PCs are trying to get the city to declare martial law (say, to keep innocent victims out of the way of a cannibal horde), the mayor will talk to his trusty advisors. Brand might encourage the mayor–even offering to swing a snap council vote to grant the mayor the authority to press gang security guards for the duration of the emergency. Conversely, Sam might point out that the cannibals seem to be victims of a drug or other brainwashing, and encourage an investigation into the source of the problem. 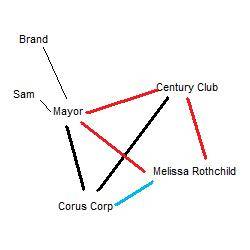 One thing that you’ve probably already noticed: each of the members of the group can have relationships with the other factions. Brand might hate that his friend, Melissa Rothchild, and the mayor can’t get along. So Brand is often the go between, brokering deals that both sides hate to accept.

The Well of Souls(pdf), has great relationships and a plot that could be adapted to any barony. With a coat of paint and some slight modifications, the same scenario could play out in space or a modern city.

Making a Campaign out of It

If you like the technique for generating NPCs, you can reduce your prep (and get increased player buy-in) by sharing the factions and NPCs with your players during character creation. By encouraging your players to help you flesh out the factions and develop relations to the NPCs, the resulting player characters fit the world and have an idea of what they can affect from the moment the game starts. Pretty cool, huh?

This is really well suited to intrigue heavy games; group your NPCs into factions (the kingsguard, the praetorians, Duke Ewan’s faction, etc.), write them down, and share their general relationships. The PCs can always dig into the praetorians later and see if there’s a clique who can make common cause with Duke Ewan’s faction, even against the official stance of the group as a whole.

Intrigue and Your Games

What techniques do you use to generate factions, conspiracies, and power players? If you have tips for sharing their attitudes in game, or techniques to record their dispositions, I’d love to hear them. Please share in comments!

9 Responses to Illusions of Depth: Factions and Teams