Last week I shared a technique that’s been around for a while; much of it was borrowed fro Chris Chinn’s blog and old RPG.net articles. Building a conflict web is a way to quickly interrelate people, and have them react to each other’s fortunes and misfortunes in life appropriately. It’s another way to juggle lots of NPCs–similar to the matrix method Bryan B discusses in the linked post.

Last time I wrote, there was an image of a complex web of names near the top–something a lot like this: 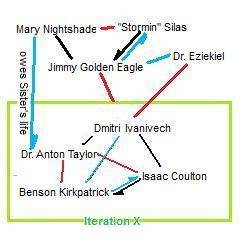 Let’s take that group of relationships for a spin!

When I drew the above map, I was thinking about a cool Mage: the Ascension campaign I ran long ago. I really enjoyed the Technocracy as a foil for the PCs; while the specifics have faded to a comfortable haze, the impending threat of Iteration X (a faction of people who believe that machinery and computers = the path to perfection) was the spark that started my example. I decided to start with the enemy group’s leader, then use the subordinates to flesh out the local membership.

To support him, I thought that instead of going Spock-McCoy subordinates, I’d borrow from Iteration X’s computer associations and create three subordinates: good, fast, and cheap. That quickly led to:

A new thing: Notice that Benson and Isaac are connected by two arrowed lines, not one symmetrical one. The arrows show that the relationship between the two differs–they don’t see the relationship the same way. In this case, Isaac is loyal to Benson–he’s probably indebted to Benson for for sucking Benson’s up share of simulation resources–while Benson’s relationship back is strictly professional. Asymmetrical relationships like this are an easy way to make relationships more complex, without taking a lot of additional effort.

Dmitri has a core team that he has honed like a monofilament knife. He gets along very well with both Isaac and Anton. Isaac and Dmitri have a mentor/student relationship, given their similar drive to simulate and predict. Dmitri anticipates Anton’s needs and publicly praises Anton as the practical “building block” of the group, the one whose toil means resources for everyone else. His relationship with Benson is more cooly professional; Benson’s critical role in security makes their relationship one of specialist peers more than an eager subordinate.

Dr. Anton Tayloris loyal to his boss, Dmitri, but he is bitter rivals with Isaac and Benson. His own projects are constantly put on hold so that he can provide resources to the pipe dreams and distractions of his two “peers”. He views Isaac as a dreamer, and viscerally abhors Isaac’s casual willingness to “upgrade”, integrating coprocessors into his brain. Similarly, Benson’s security projects keep disrupting his processes–he’s lost several promising subjects to “highest priority” projects under Benson’s thumb.

Isaac Coulton is a researcher on the cutting edge, who will conclusively prove whether reality itself is a simulation. He’d love to be lost completely in his research–and appreciates the support that Dmitri and Patrick give him. He’s stung by Anton’s hostility to his resource requests, and resents Anton’s control over the resources he needs. Isaac wishes Anton was smart enough to realize that his projects are trivial; who cares about squeezing efficiency out of things when it’s likely that everything is just a simulation anyway?

Benson Kirkpatrick respects Dmitri’s experience, but is too analytical to close his eyes to Dmitri’s manipulations. He finds it impossible to ignore Dmitri’s constantly evaluation of how valuable an exchange he can wring out of you in the war. Benson’s antagonism with Anton hinges on resources; Anton hoards the resources that Benson needs to maintain security and implement improvements to their defenses. Benson has carefully cultivated Isaac as a resource, aiding the young researcher’s researches and pouring effort into Isaac’s simulations; he has accumulated a number of debts to call on, and can adapt some of Isaac’s simulations and discarded technology to his own projects.

Dad played a very interesting character in the campaign, Jimmy Golden Eagle–it’d be criminal not to include him in a Mage example. Jimmy’s beliefs (and several terrifying experiences) led him to strongly oppose Iteration X. His fury wasn’t personal to any one member–he hated them all. (Taking the advice of Svengaard, I drew his relationship to the Iteration X box, to indicate that the relationship is man-to-faction.)

Conversely, Jimmy’s ally of convenience, Dr. Ezekiel, has a long history with the Dmitri. From mining-duels on Titan to Dmitri’s responsibility for having his father sentenced to a Siberian work camp, the two have a long and mutual hatred. Dr. Ezekiel is new to the area, though; with only Jimmy as an ally, and that not a strong bond, he’s in no position to strike–or even reveal himself. For now, he’ll seek out allies and provide Jimmy with information about Iteration X, especially the practices of his foe Dmitri.

Mary Nightshade is in a tough spot. She is close allies with Jimmy, but Jimmy keeps trying to involve Silas, who Mary swore a threefold oath to never cross paths with again. She also owes Dr. Taylor her sister’s life–if Jimmy and Dr. Taylor ever cross paths, she’d be unable to help him until her debt is repaid. She is embarrassed by the obligation, and knowing Anton’s personal nobility, she wonders if Jimmy isn’t painting with too broad a brush.

Webs: A Tool for Sketching

A lot of variations of this style of presentation exist. As RoxySteve pointed out, the content of the connection is important too–a positive/ negative/ neutral line is a starting point for brainstorming and a quick reminder, not really enough detail to engross us. If each link is an made concrete by a shared experience, an object, or something similar, you have direction for the characters when you activate them for play.

Evil had a good idea too: give your players the names and have them note the relationships. A visual record that everyone can refer to can help remind everyone that today’s peasant cares what happened three villages back because his daughter lives there!

If you’ve used Rmaps, conflict webs, or similar schemes to develop interrelated groups, please share your experiences in the comments!