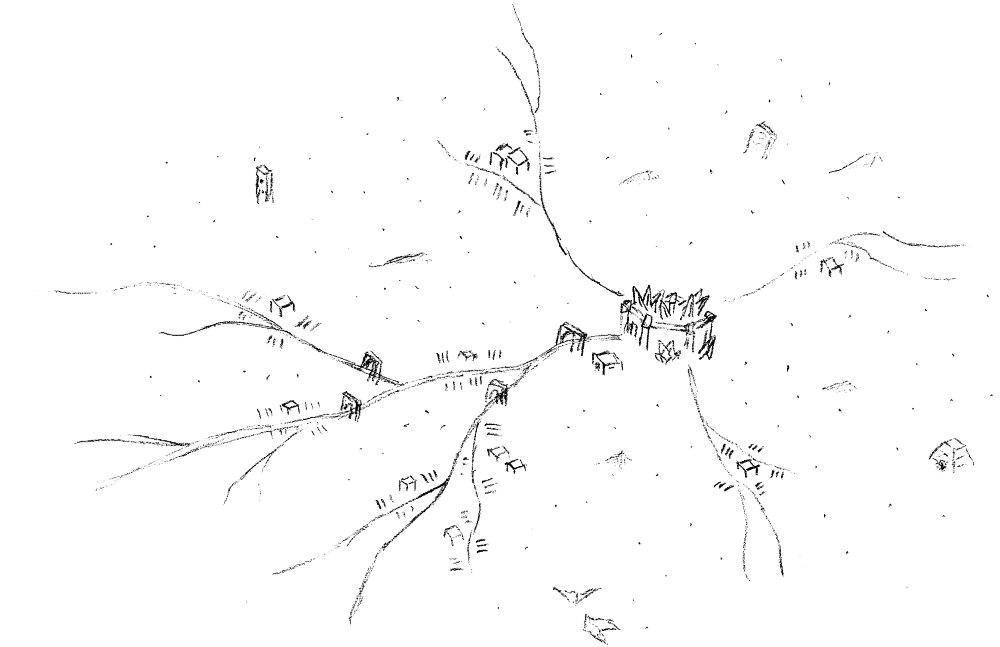 A brief plug: for the foreseeable future, I plan on writing about one of these a month. If you think you can do a better job than I do at making maps (and who can’t?) and want to sell me one and have your work featured here, send an email with the subject line “details” to mapcom.gnomestew@gmail.com and my bot will tell you all about what I have in mind!

Some of these appear to work well together. Genius Loci, Magic Effects, Ancient and Desert imply a pseudo mythological Egyptian setting, but Ice Spires and Rivers seem out of place. I was originally toying with the idea of having a northern ice wall for the ice spires, but my wife suggested a central ruined city coated with ice, a remnant of some ancient magic apocalypse.Â  We went with that, which handily also explains the rivers.

So we now have the main idea for the setting: a desert nation with a city in the center magically covered in bizarre ice growths. This ice is simultaneously constantly melting and being regrown and the result is that several rivers of water flow out of the city into the desert where they branch out and form a web of survivable arable land.

We can easily tie several other aspects into this main one. As the ice forms, it takes in moisture and pushes out heat. That’s why the surrounding area is a desert: the city is acting like a huge dehydrator and heater. This means that the ancient ruins are from whatever civilization the central city belonged to. When the ice started forming it slowly transformed the land around it into desert. We can say that the steam tech is actually from this older civilization and a few functional golems and other guardians inhabit these ruins. The modern inhabitants of the land are able to restore, jury rig, and reverse engineer crude examples of this older tech.

This raises the question of what this steam tech uses for fuel. Wood would be in short supply. Other fossil fuels might work, but would mean no ancient golems stomping about (who would be keeping their boiler topped off?) so we can fall back on “It’s magic”. But in this case, we’ll go with a specific magic: trapped elementals power the boilers indefinitely, fire elementals providing the heat, while smaller water elementals provide water. This means that steam guardians are especially dangerous because if they are disabled, there is a chance they overheat and rupture, releasing a pair of agonized dangerous elementals which are likely to attack anything around themselves, including each other since “dying” is a reliable way to get back to their home plane.

If you’re from my game and reading this, this part is spoilers:
This goes full circle – What if the ancients were trying to build a massive steam engine to power something extra large? Let’s say the entire city? Do they enslave a literal army of fire elementals to do it? Or just one really big fire elemental? And who is the biggest fire elemental of them all? Imix, the fire prince of elemental evil. So somewhere in the city is a huge boiler holding Imix himself, heating water pumped from the elemental plane of water directly. But Imix is more than they bargained for, and the heat he’s pushing out has to be contained before he slags the boiler and burns down the whole damn city. First they tried venting some of the heat outside of the city but that wasn’t enough. So, since they didn’t have any trouble summoning and containing Imix, who’s the natural choice to keep him well contained? Well, Cryonax, the ice prince of elemental cold. Three guesses what happened next: Cryonax didn’t manage to escape. But he DID manage to break containment enough to freeze the whole damn city. Steam lines, powered by Imix, run through the whole city and keep encroaching ice melting and runwater flowing, but otherwise the whole place is coated in several feet of ice and blossoming with spires and ice flowers everywhere. Citizens that were trapped inside have been transformed into ice mummies, some steam golems still operate (including a crew that tirelessly chops up and carts away ice that’s blocking important roads and doors. And if the PCs manage to infiltrate their way to the heart of the city and kill or banish Cryonax, then it’s only a matter of time before Imix overloads his boiler and blows it to pieces.

So what did we leave out?
There are a couple of options for Genius Loci.

My wife likes the BotNet idea. So do I, but I also like the tormented dark nature spirit, so heck with it, we’ll go with both.

More spoilers:
BotNet seems ambivalent and neutral, but is actually a villain. It’s always listening when it can, cares nothing for people and is primarily interested in advancing its own power. It draws a lot of the power from the still functional mega steam engine in the city, and it was an attempt to cripple it that made someone sabotage that system. In a way, they were successful. The downfall of the surrounding area has largely contained the threat. The nature spirit on the other hand is a minor player. Maybe back before the land became a desert it was more influential and maybe it will be again if the land is restored, but for now it doesn’t have much of an agenda aside from lashing out and protecting the few living areas that remain.

Magical Effects: We’ve firmly established that the earlier civilization was a highly magical one. They had steam tech, enslaved elementals, a magical internet etc. The magical effects are mostly artifacts of that era.

Monarchy: Monarchies are a staple of fantasy RPGs and we’re going to go with an asshole monarchy, which is also a staple. We’ve talked about the rivers flowing out of the city and how they’re the source of what little livable land there is in the setting. The largest river is home to a self proclaimed king-captain of a military unit. He seized control by holding a small keep near where the river exits the city and fending off the occasional attack by ice mummies while digging a basin and building a dam which he uses to control flow of the river, extorting fealty from everyone downstream. Under his control several more dams have been built across major branches allowing his subordinates to selectively deny water to specific locations.

Other smaller rivers exist and the monarchy has no control over these. They are smaller, independent and less secure without the presence of soldiers and defenders.

Along with this, we will say that while there is the occasional jury-rigged steamtech golem or vehicle throughout all the controlled areas, the largest concentration does NOT lie in the kingdom but instead with a band of nomads who use their collection of steam vehicles to range from water sources not under control of the monarchy. This freedom makes them enemies of the state and in return they often harass patrols and supply lines.

OK, that gives us an interesting and complex setting with lots of flavor, several types of locations and even three gray area factions to deal with. That should be a good start.