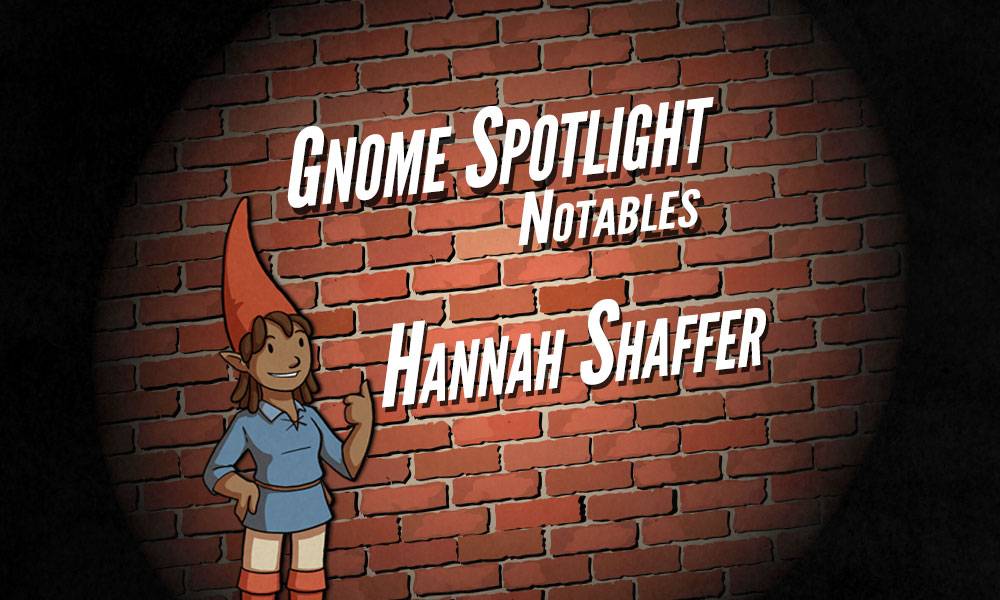 Welcome to the next installment of our Gnome Spotlight: Notables series. The notables series is a look at game developers in the gaming industry doing good work. The series will focus on female game creators and game creators of color primarily, and each entry will be a short bio and interview. We’ve currently got a group of authors and guest authors interviewing game creators and hope to bring you many more entries in the series as it continues on. If you’ve got a suggestion for someone we should be doing a notables article on, send us a note at headgnome@gnomestew.com. — Head Gnome John 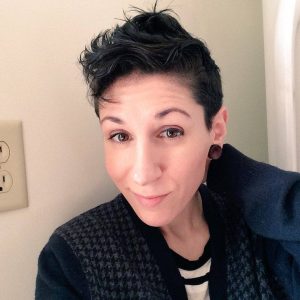 HannahÂ isÂ an independent game and web designer living in Massachusetts. In addition to her work withÂ Make Big Things, she recently came on board as Director of Marketing forÂ John Wick Presents, where she gets to pitch goofy ideas forÂ 7th Sea.Â She has a deep appreciation forÂ 90s point-and-click adventure games and tea.

I’m Hannah! I’m a game designer mostly creating in the story game space, but venturing into board games now too! I make games about queerness and people making hard decisions in unstable worlds. I’m part of a three-person game design co-op called Make Big Things, along with Evan Rowland and Brian Van Slyke, and we make most of our games together. We’ve had trouble coming up with a good slogan, but I’ve heard people describe our games as “bleakly hopeful” and I kind of want to run with that.

I’m really proud of our first roleplaying game, Questlandia. It’s a one-session RPG about a bunch of people living in weird collapsing worlds, a la Neverending Story or Miyazaki-style fantasy. Your character is trying to accomplish a big personal goal while the world around you tumbles into chaos, and you play out how they work with or struggle against the tides of change. In the spirit of “a game is never really done” there’s a lot of stuff I’d do differently if I could go back and do it again, but I think it was an ambitious first game and people are still discovering it and creating cool worlds with it.

And the game actually isn’t done! We’re working on Questlandia 2 right now, and we’re re-designing the game essentially “live” in a bi-weekly podcast called Design Doc. Anyone who wants to follow along can check that out here! 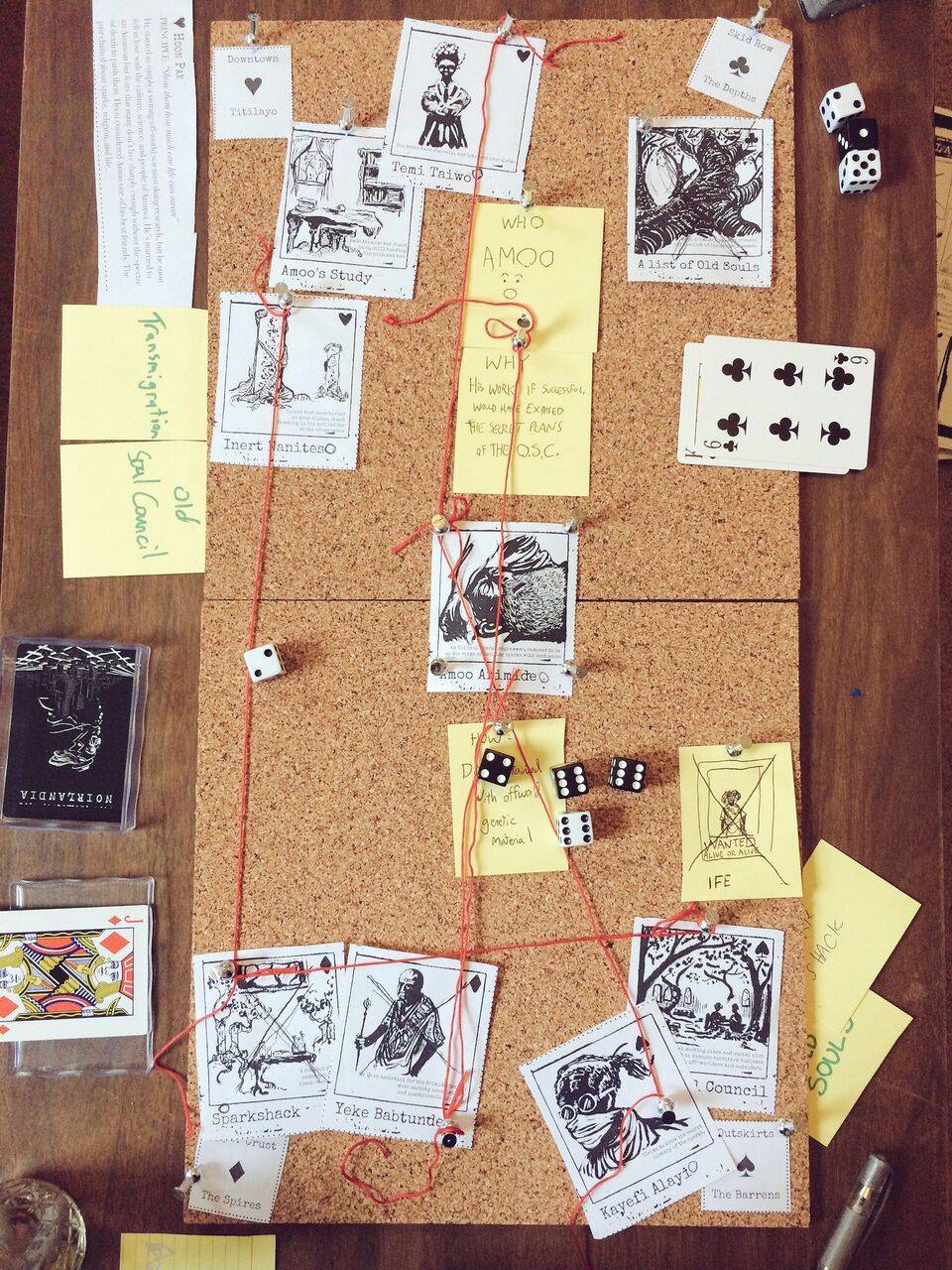 For Make Big Things there’s a definite current of collapse scenarios, community building and re-building, and the ways people come together in times of change. In my own game work I like exploring themes around people’s physical and spiritual bodies, queerness and sexuality, environmental and social fantasy. I’ve been thinking a lot recently about drugs and bugs, things that may push at the edges of safety and comfort, and I want to make more games that include those themes.

I want to find ways to keep bettering the experience of shy players without making them feel put-upon. I’m not sure what those mechanics are but I’m trying my best at them

I’ll go back to the idea of bleakly hopeful. I like games where characters confront impossible situations, and I want to find the line where that still feels exciting and interesting and not frustrating. I like a game where you roll or draw the worst possible outcome and everyone at the table goes “Oooooooh!” because that outcome just makes perfect sense.

6) How does queerness fit into your games? 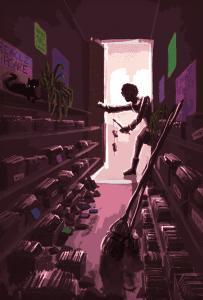 In Questlandia players are exploring worlds that aren’t quite our own, so there’s a lot of exploration around gender and sexuality and different ways of being and loving. In Noirlandia, which Evan Rowland designed, players are inspired to stretch their interpretations of noir genre tropes, so you see a lot of tangled queer relationships and hidden identities that exist in a really shadowy space. Damn the Man, Save the Music is a genre game too, but it’s genre is ’90s teen comedies,Â  which weren’t super great about queer things. Damn the Man gives players the option to imagine an alternate ’90s where queerness could exist in a safer space.

7) What’s it like working with a game design co-op?

It’s great and hard! I love creating with friends. I think my ideas are better because of that support and it’s taught me so much about communication, shared vision, and compromise. Each one of us has our own style, which I really love, but we’ve sort of converged on a shared ethos for all of our games. I like games about sad people, Brian likes games about movement-building and social justice, but he also really loves puns, and Evan wants to make games that seem like they’re trolling people, but are actually very thoughtful and serious when you sit down to play them. That’s actually left a lot of room for overlap in the things we care about, and we each get to step back sometimes and let the other person’s design choices shine.

8) How did you get into games? Who did you try to emulate in your designs?

I graduated from college during the last housing bubble. People weren’t using the word millennial disparagingly yet, but everyone could feel this real sense of “What happens next? Where are the jobs? Why did this process look totally different for my parents?” Evan and I had been talking about our bleak job prospects, and like you do, we started making a point-and-click video game about Russian psychic technology and economic collapse. We started a little community center and youth program during that time, and on opening day a bunch of Massachusetts tabletop game designers just happened to show up.

After making these newfound friends, tabletop felt like a nice space to explore. As for who I was emulating, I’d say it was knowingly and unknowingly this Massachusetts collective–Joshua A.C. Newman, Emily Care Boss, Vincent and Meg Baker, and Epidiah Ravachol. They’re good people, and it’s kismet that I met them.

I think tabletop gaming can be very insular. I didn’t start gaming until I met other folks who ushered me into the hobby, but that wasn’t for lack of trying! I’d spent years peeking in on game store events and the college gaming scene. Once you’re “in it,” it’s really hard to imagine why it’s so hard for others to get in. The things that made it hard for me that I’d love to see improved are: 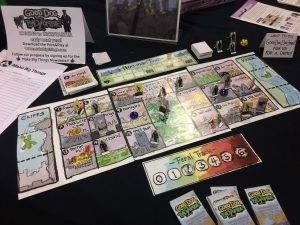 Oh, that’s not one thing I’d change–that’s two things. I was gonna just keep going with that list. I know it’s hard to put yourself outside your own shoes, but it’s something I really try to do when I think about welcoming new folks to the hobby.

Aside from Questlandia 2, I’m working with Brian and Evan on Good Dog, Bad Zombie, which is on Kickstarter now. It’s a cooperative board game where you play as good dogs saving scaredy hoomans from the zombie apocalypse. It’s not a game I could have made myself, because I’m a board game dunce, but I’m really happy to be involved. You move across the map of your ruined city, herding hoomans back to the safety of Central Bark while zombies spawn across the board. It’s a board game that does a great job with its incorporation of theme and tone, and I think it inspires roleplay in clever ways!

It has about a week left on Kickstarter! After that, I guess we’ll be hitting production full-throttle. 🙂

Thanks for joining us for this entry in the notables series.Â  You can find more in the series here: https://gnomestew.com/notablesÂ  and please feel free to drop us any suggestions for people we should interview at headgnome@gnomestew.com.