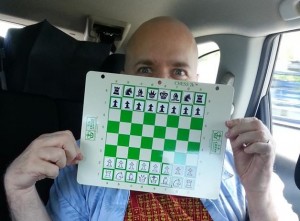 Before I beat Todd at chess.

This was my 3rd year going to Origins Game Fair in Columbus, OH. I drive up to Rochester, NY to meet-up with fellow Rogue Princess Ang and pack into her car for the 6 hour drive out to Columbus. I get to sit in the front because out of all of us in the car I stay awake and help navigate, plus Ang and I hardly run out of things to talk about. This year however one of our fellow passengers challenged me to a chess match. Todd would come to regret this challenge because I whipped him good. Todd’s wife made a great decision and sent him with cookies of the chocolate chip variety and the whole car rejoiced for the victory was celebrated with sharing of said cookies. We saved a cookie for Honorary Princess Skotte because he sleeps most of the way and we are big on sharing. Travel was mostly uneventful after our dinner stop. We just went through this one section of rain that was the size of shot glasses being thrown at the car, but we made it to our hotel just fine and with daylight still above us. 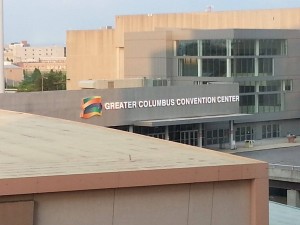 The view of the convention center from our hotel.

After last year’s disagreement about the size of queen size beds we switched to a new hotel. This was the best decision we could have made. Everything was new and shiny, shiny like in the Firefly meaning of being new and awesome all at once. We had a great view of the convention center itself and a quick walk right over to any of the games we wanted to play. We will be totally staying at this hotel again next year.

The con itself has a pretty good layout, any game you are looking for pretty much gets its own space. Of course the bigger game companies take over a section of the con. Last year I spent a lot of my time in the Mayfair room playing Settlers of Catan, so this year I tried something different. Werewolf, as in Are you a Werewolf? and not Werewolf LARP. The overnight Werewolf people are seriously hard core. We started a game at 1am and they were expecting it to go to 4 or 5 am. I really didn’t know what I had signed up for. After playing a few games of that I found an Ultimate Werewolf game, they add more types of characters to the village and that game is much more interesting for me, even though I was eaten in the beginning of that game. 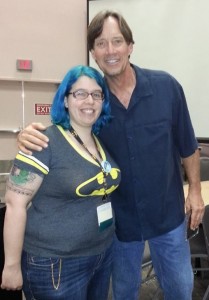 Kevin Sorbo after watching his movie.

Last year at Origins the special guests were Wil Wheaton and Felicia Day. This year I was lucky enough to meet Kevin Sorbo. He brought along with him a movie that has not been released to the US yet, “Julia X.” I was a little apprehensive about it at first because it is a horror movie, horror and I don’t always get along. However I would put it in the same boat as Cabin in the Woods for dialog and turning the horror genre on its head. It’s definitely a movie I would want in my collection; black comedy and horror should hook-up more often. Mr. Sorbo himself is super nice; he answered all of our questions about Hercules and Andromeda. He is even open to the idea of being on a youtube based series, so I totally plugged Geek & Sundry’s Tabletop. I don’t know if he will be on Tabletop but it would be really kewl to see him playing a board game with Wil and he could also get the projects he is working on  to a wider audience.

I completely missed pre-reg for games this year. By the time I got around to it everything I wanted to play in was taken, even the DC based games. This is the reason I ended up watching “Julia X” with Kevin Sorbo and playing “Are you a Werewolf?” until the early morning. I was able to jump into a few games with friends with my generics; seriously if you are ever able to make it to a bigger con buy generics they are total con savers. One of these games I jumped into was called “Heroes of Costmart City” run by Windmill Game Co.  It’s a superheroes game for the rejects from Mystery Men. This year I played Checkout Girl. She knows where everything is in Costmart and has to help you because you are in her store’s location, unless she is on her 15 minute break. As a group of ragtag heroes had to stop robots from destroying the products in the store, they started out as Brobots and were defeated by being turned into Nerdbots. There was so much more going on in that game, but it’s very hard to keep track of once we start playing because of the chaos of the system the power to do whatever you want.

Another game I was able to be a part of was Settlers of Catan with Ang, Ed, and another girl. We completely randomized the whole map; a bit of my minor OCD showed through when I needed the alphabet tokens to be in the correct order, but I covered my eyes and powered through. Once the map was set up we rolled to see who would go first, I ended up with last placement of my villages and roads. However being last placement in Settlers of Catan can truly be a boon in this game. I started out with cards to get a Development Card, a card that helps with victory points, resources, or largest army. In my veteran status of playing this game I know that these cards will help me get farther in the game than starting on Wood and Brick, which only get you roads and half settlements. In the end I won with Largest Army and victory points as well as the Development Cards being called Alana Cards. 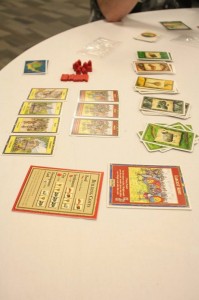 And I couldn’t end this blog article without talking about the BIG BAR ON TWO!!! A bar on the second level of the Hyatt where gamers come to drink and schmooze, last year I met Wil Wheaton there. This year I met a few game developers, a writer from Nerd Span, and from across the bar a man who looked like one of the guys from Ghost Hunters, but I didn’t go say hello because I never really watched that show, ghosts really aren’t my thing. However Magicians are my thing especially when they let me try absinth for the first time, thank you Michael Mirth I have a new favorite drink! I look forward to seeing you at Con on the Cob. And also you dear reader, I hope to see you at next year’s Origins so we can play games and drink at the BIG BAR ON TWO!!!

1 Response to Origins: A Con for trying new Things