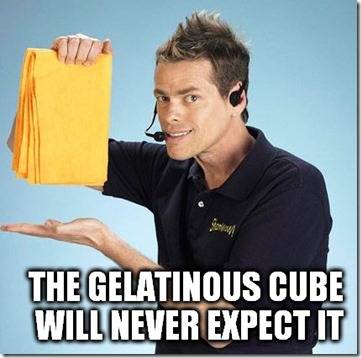 So, if you two can balance the ladders just right for about 45 seconds, I can get high enough to get a good angle from this garden beyond the castle walls. I can throw my dart the distance to the chandelier from there and with a good enough to hit roll, which I can totally make!, I can cause it to come crashing down on the table while the duke and his guests dine. They get paranoid and are alerted to the real assassination attempt going on, but we don’t have to come forward and risk being thrown in jail because of that orphanage incident… We just need two people to make rolls to hold the ladders, then I have to climb one with a balance roll, and then I have to make a decent roll to throw my dart and hit that place between the chains… So, shall we try it?”

As a Game Master, you’ve probably sat on the other side of that player conversation that sets up some crazy, almost sure to fail idea. You know the kind – the overly-complex, problem-laden, reality defying idea that would only feel at home in a Laurel and Hardy Three Stooges short. It breaks the verisimilitude of many games and settings – but when it came up in my game, I threw it against the most importantÂ litmus test I’ve got for allowing crazy ideas, and it passed.Â  Some Game Masters will try to nudge their players to more realistic paths, some will shake their heads in defeat and groan as they tell their players to roll. Sometimes the other players will look at the player suggesting the idea and give muted sighs of frustration. Sometimes, no matter how stupid or complex, the players are all gleefully giggling and figuring out how to do the very crazy idea, and that is what makes it pass my simple litmus test:

Does it make the game more fun for the players?

All the questions of breaking setting, tone, and mood or whether a situation would really work or not pale in comparison withÂ that one concept. If the players are all excitedly yammering about how they’ll make the ladders work and balance or what they should write on the dart to frame the right people, then nothing else matters. The players are going to have more fun attempting their crazy idea than creating some dramatic or realistic moment that taxes their abilities or showcases their awesome skills.

Does it make the game more fun for the players? is the first and final question I ask myself when I arbitrate a situation in-game. Will allowing something that otherwise breaks everything else I’ve set up make the game more fun? Then I go for it and say yes. I can always repair or restructure my adventure so it moves forward in some way, but I can never recapture the excitement the players are generating themselves if I say no to what they are attempting.

That’s my main litmus test. Do you do something similar? What criteria do you use when the players are doing something crazy? What is the craziest idea you’ve let the players try?

15 Responses to My Litmus Test For Crazy Player Ideas