This will be my 13th Gen Con (I think — it might be my 12th), and every year I go I try to iterate and learn from past years. Every year, my Gen Con crew also tends to do something a bit different overall — and this year, we’re going for a full-on “ad hoc con.” We have zero events booked (although attending the ENnies is on the roster), and zero event tickets — not even generics.

Instead of scheduling events, we’re going to run and play a passel of RPGs and card/dice games, catch up with each other and with the other gnomes, wander the dealer’s room, hopefully meet fans of the site and other cool gamers, and generally connect with our tribe. It’s the least structured Gen Con I’ve ever planned for — and funnily enough, it does require some planning.

Specifically, I figured it probably required a Gen Con kit built around our goals, with one other objective: carry as little crap on the plane as I can. I want to run/facilitate as many games as possible with as little stuff as possible.

I spent a lot of time on my kit, adding and discarding games as some options rose to the top, asking questions on Google+ about what to bring, and generally geeking out about it. Which was fun! I managed to squeeze in 5 RPGs with play aids, 5 adventures, 6 Fiasco playsets, 6 card games, and 3 dice games, plus a couple of backup RPGs in PDF for good measure — all in a pretty small package.

Here’s the whole kit — all of the gaming stuff I’ll be bringing to the con: 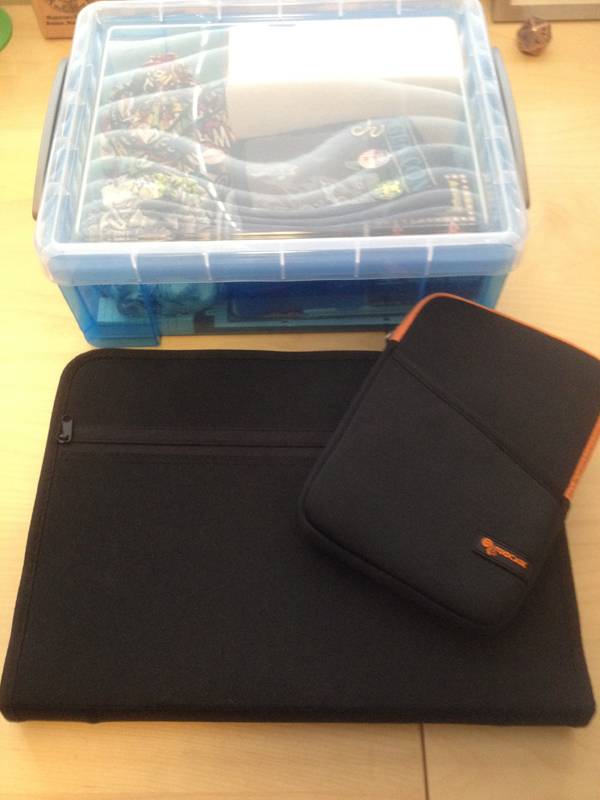 The box is a Really Useful Box (8-liter size, large enough to hold several gaming books/small boxes), available online and at Office Max stores (and only there in the U.S., I believe; RUB is a British company not widely distributed here). I won’t be carrying the box around, but it’s a convenient way to keep lots of small stuff in one spot — and on the way back, it’s where I’m going to put my swag. Any books I buy will go in there, padded with clothes, so that they arrive home in good shape.

The folio is a zippered multi-pocket thingie (no idea where I got it), and is durable and surprisingly capacious; more about that in a minute.

I volunteered to do most of our GMing at the con, which I’m really looking forward to. I evaluated my collection with a few specific criteria in mind: fun factor, obviously, but also form factor (small books and/or PDFs), how easy a given game would be for new players to pick up, a good mix of new-to-me and previously played games, what would work best in short bursts or one-shots, what sounded exciting to run, and what would be a good fit for this group.

I settled on five games, probably more than we can reasonably play while doing other stuff as well:

I also have some backup options on my tablet, just in case:

Here’s the folio, showing all its pockets and their contents: 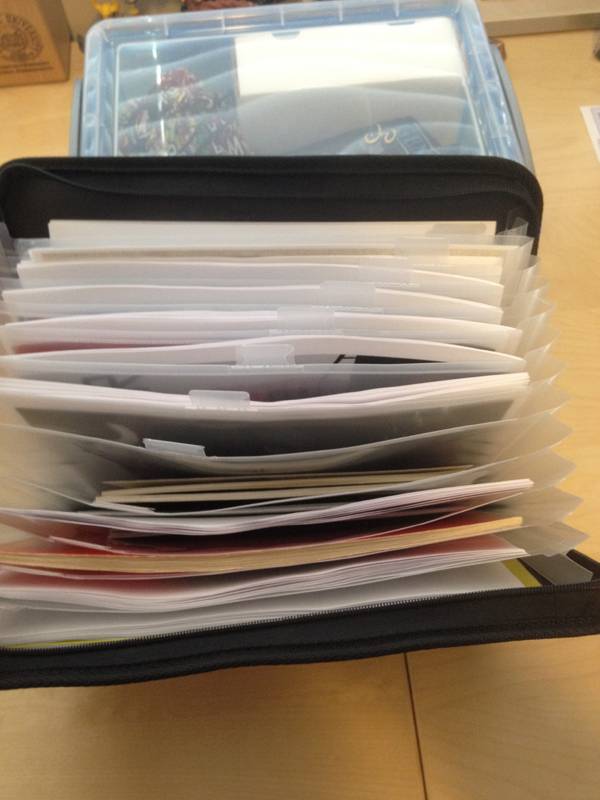 The paper — which is most of what’s in there — is all printed-out play aids in one form or another. Here’s everything I’m bringing for D&D, Poison’d, Traveller, and DCC RPG: 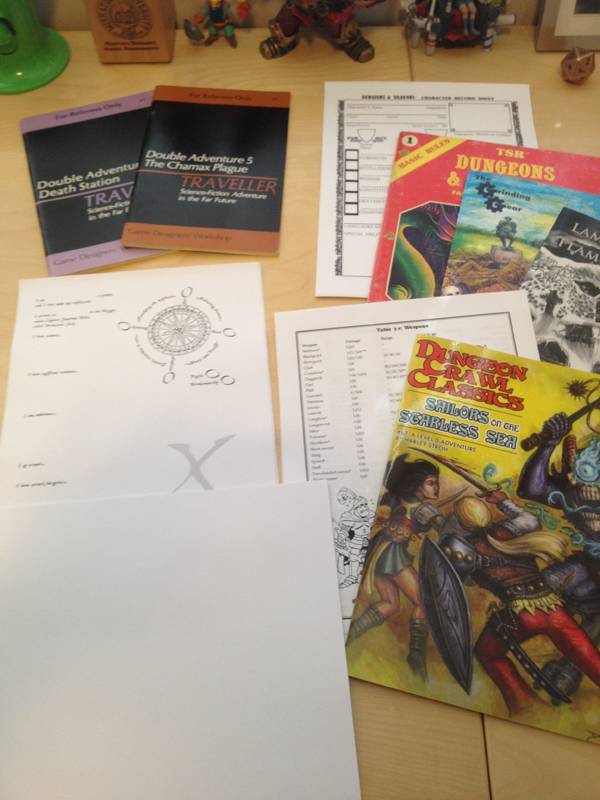 For D&D and Poison’d, I printed out character sheets. For DCC RPG, I printed out the equipment pages to speed up character creation, as well as some “two-up” character sheets. For Traveller, I’ll be printing out the chargen tables from Book 1 and Citizens of the Imperium, plus deck plans from my adventures (I haven’t gotten the Trav CD yet, which is why those aren’t shown here). Last but not least, there’s a stack of scrap paper just in case.

Here’s all my Fiasco stuff (index cards are in the blue box): 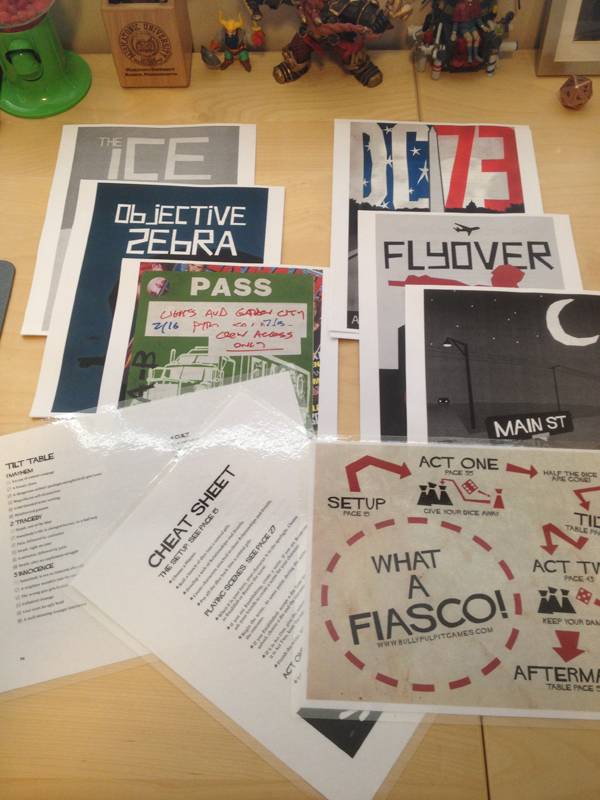 For Fiasco, I focused on playsets that are easy to get into with zero Fiasco experience (I’m the only one in my crew who has played it before), and added a couple of fun-sounding oddballs. The only one whose title you can’t read in the picture is the green one: Touring Rock Band.

For each one, I printed out the cover with the synopsis (if there was one) on the reverse, and duplexed each element — Relationships, Needs, etc. — on four more pages. I also printed all the elements twice, figuring that two copies is enough for people to share at the table.

The laminated sheets towards the front are the free Fiasco playmat, a sheet with Tilt on one side and Aftermath on the other, and the cheat sheet from the book (all printed from my PDF copy of the book).

Here’s why there’s only one core book in my kit: 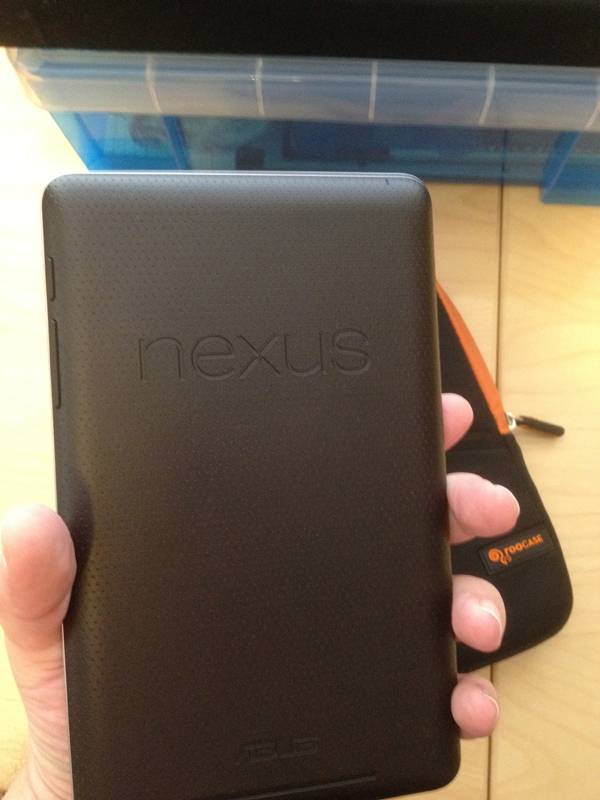 I bought this tablet — a Google Nexus 7 — recently, partly with Gen Con in mind, and I love everything about it. It’s small, light, inexpensive ($200 for the 8 GB version, which I have), fast, and has amazing battery life. This version of Android is so slick it’s making me seriously consider switching away from my iPhone next time I’m due for a renewal. It’s a fantastic little computer.

For gaming purposes, I’ve got ezPDF Reader installed and all of my core books and other resources in PDF format downloaded to the tablet (they’re also in Dropbox, but if I can’t get wi-fi I need local copies as well). The case is a RooCase sleeve that I also love. I don’t need a kickstand because the case props the tablet up nicely for referencing rulebooks.

I would have loved to bring Call of Cthulhu and a couple of adventures (one or two from Tales of Terror, plus In Media Res from an old issue of The Unspeakable Oath), but I don’t own CoC in PDF and I’m not willing to buy it (or steal it) or lug two giant books. (I own 10 copies of various editions of CoC; it’s ludicrous to me that I should have to pay again to get the game in PDF — print gaming books should come with PDFs.)

I debated including non-RPG stuff in this article as that’s not really what Gnome Stew is all about, but decided to include it because playing games of all stripes — especially with old friends and with new folks — is what Gen Con is all about, and pickup-friendly games fit that bill.

Here’s what’s inside that blue box: 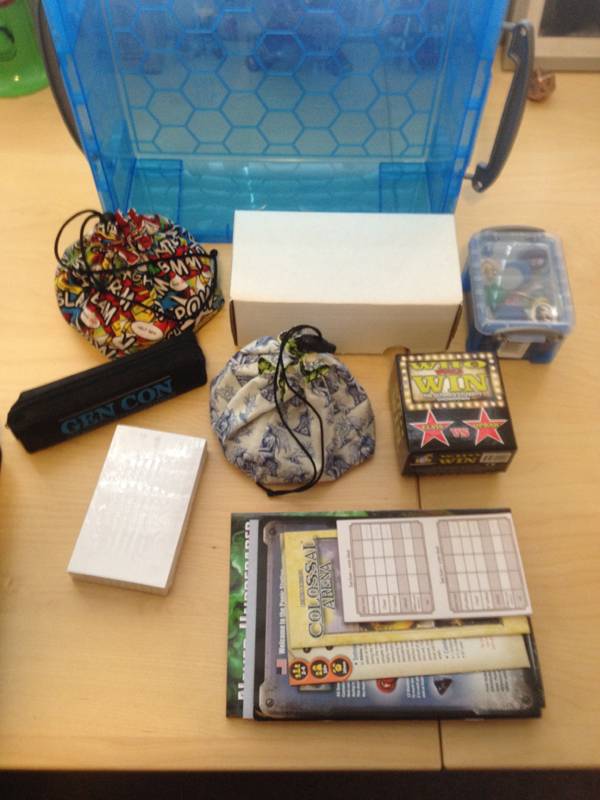 The brightly colored dice bag contains around a hundred dice (enough to play virtually any RPG, and to share), the index cards are for Fiasco, and the pencil case contains a pen, several pencils, and a Sharpie for Fiasco. The copy of Never Unprepared peeking out from under the rulebooks is there so Phil and other contributors can sign it at the con.

As an aside, the two dice bags both come from Marsbarn Designs, and I reviewed my first one here four years ago. After four years of near-weekly use, including travel, it looks the same as it did when I bought it. I call these the ultimate dice bags for very good reasons!

The rest is all card and dice games: 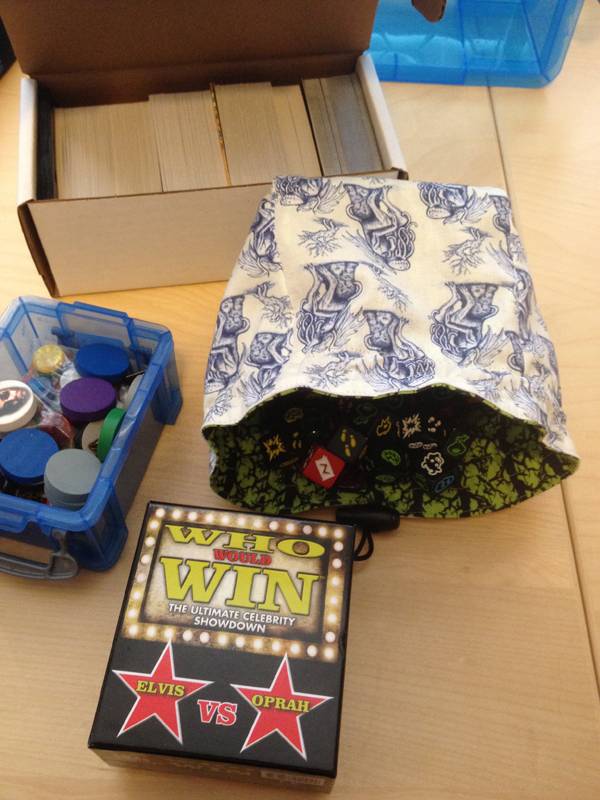 The card box (a medium-length cheapo cardboard number) has the cards for San Juan, Fzzzt!, Panic Station, Biblios, and Colossal Arena, all of which are only or primarily card games. Who Would Win is already so compact that I left it in its own box. The rulebooks are all pretty small, and all of the non-card components fit into the tiny Really Useful Box.

The dice bag (also from Marsbarn) contains Zombie Dice with the expansion, Cthulhu Dice, and Martian Dice, as well as two colors of glass beads to use for scoring (shared by all three games).

So that’s my kit! I’ll make mental notes about how well it works in practice, and hopefully improve it next year. What does your convention/pickup game kit look like?