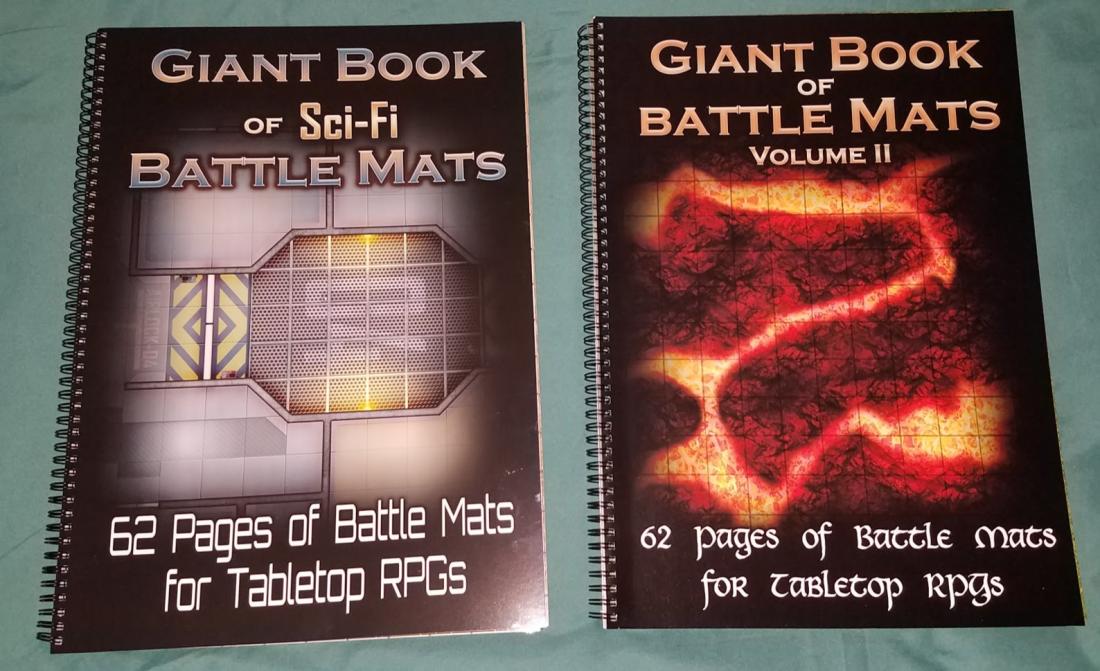 I recently received a copy of the Loke Battle Mats products, The Giant Book of Sci-Fi Battle Mats, and the Giant Book of Battle Mats Volume II. These are big 62-page spiral bound books that contain map spreads that include grids or hexes to establish a scale for use at a table. Since these review copies were provided by Loke Battle Mats, I wanted to disclose up front that I received these free of charge from the company, but I have also come close to picking up these products in the past. In fact, had it not been for the pandemic, I would have likely had a few of these on my own.

Once I received these for review, I also picked up the digital version of these products on my own for my online use. More on that later.

The Giant Books are 12” x 16” books that have maps that face one another. These maps, when used in this manner, provide a huge 24” x 32” play surface that follows a particular theme.

In addition to the Giant Books, there are several other sizes and product lines available:

So far, the Little Books include the following topics:

The Little Books are also available in slipcase sets with more than one book, to make them more useful for modular implementation.

The Big Book and the Giant Book line includes the following titles:

The Add On Scenery line Includes the following:

The Add On Scenery line is largely focused on providing items to accentuate a fantasy medieval-style setting. I have only directly looked at the two Giant Books I was provided, but I did some research online to get a feel for various other products. The map samples for the Big Book line appear to be similar, smaller versions of the same pages provided in the Big Book line, although not all the maps appear in all the different versions, since the Big Book line are 60 pages, while the Giant Book line are 62 pages. 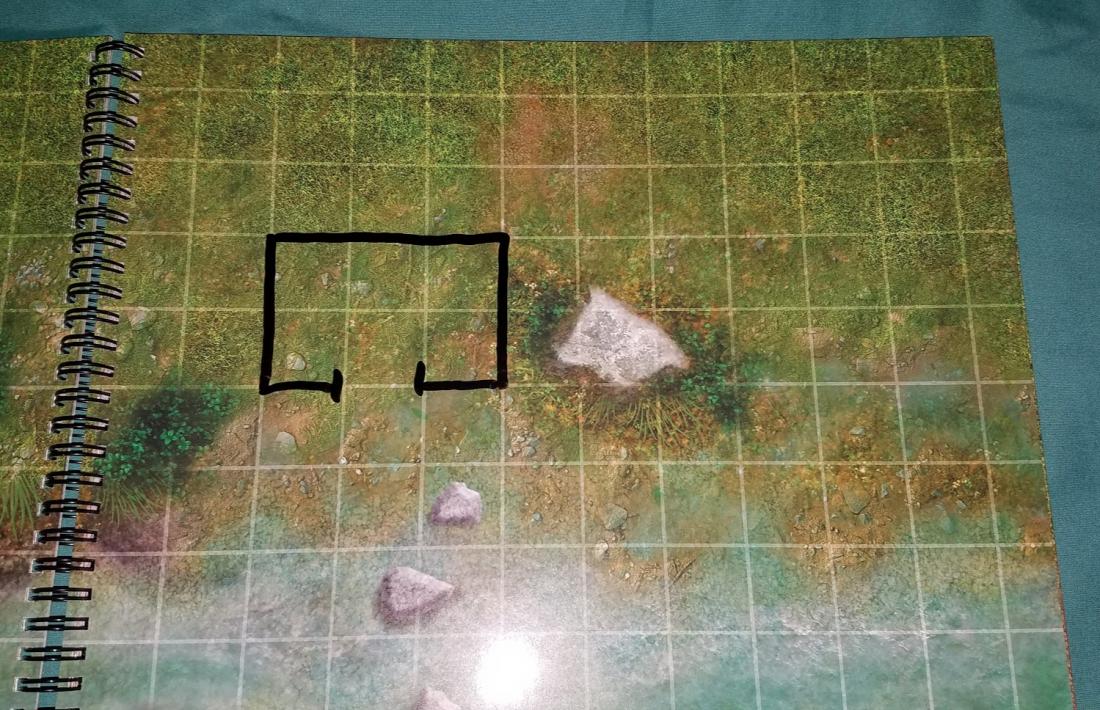 Hands-On with the Giant Books

The Giant Book of Battle Mats Volume II includes tiles, dirt roads, shrines, inns, lava caverns, grassy plains, natural caverns, a shore side temple, a hidden passage under the desert, a keep, audience chamber, wilderness ruins, a colosseum, polar caverns and snowfields, the headwaters of a stream, a cleared forest, a village composed of huts, a village in the trees, a ship with an opposite side map of open water, and two beige gridded maps.

The Giant Book of Sci-Fi Battle Mats includes rusty deck plates, lunar surfaces and “red planet” terrain, cargo holds, deserts, futuristic city streets, a corporate lobby, a train platform, alien ruins, various ship decks, glowing caverns, and a starship map with a blown-out wall open to the void. In addition to these maps, there are several hex maps that look appropriate for starship scale combat. These include trench terrain on the surface of a battle station, the space between a planet and its moon, a map far above a single planet, a blue nebula, a starfield, and an asteroid field. The blank maps at the end include a white gridded map and a white hex map.

I also did a quick drawing of some simple “cabins” on one of the maps and used a dry cloth to erase it. The dry erase marker came up easily and without leaving anything on the surface. 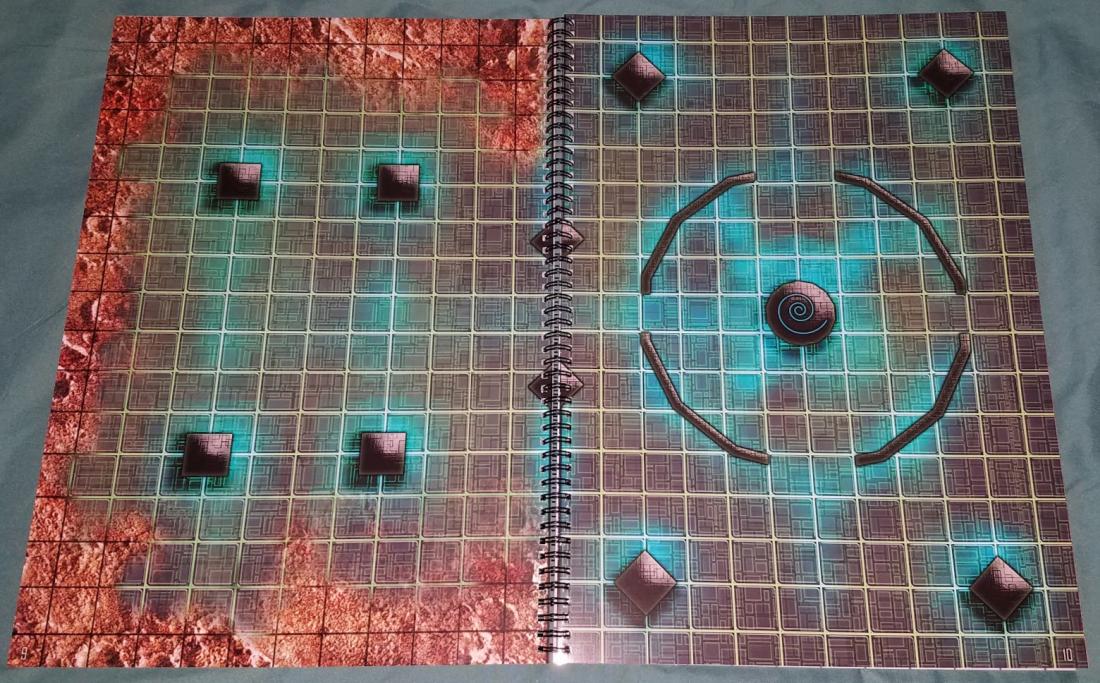 While the Giant Book of Battle Mats Volume II is the second fantasy-themed Giant Book, there is a good variety of terrain included in the book. The maps all look good, but some of them, like the seaside temple, really pop for me. In my experience, having plains, lava pits, an arena, a ship, and some icy terrain covers a lot of what you may need, especially when there are blank pages as well. I personally love the tree village, and it makes me want to run an encounter in an Ewok village or the Wookiee homeworld of Kashyyyk.

If I have any criticism of these maps, it’s that the maps that provide natural barriers present almost labyrinthine structures, and while I know there have been encounters I have run in similar terrain, having a pattern that forces specific paths and limits line of sight and ranged weapons can make things tricky, and they are going to get a lot less use from me.

The style of science fiction in the artwork for the Giant Book of Sci-Fi Battle Mats feels like it leans towards glossier Star Wars worlds, Star Trek, or Mass Effect style science fiction. One of the street scenes reminds me of the scene in the original Guardians of the Galaxy where the team is arrested on Xandar. The streets and subway maps look utilitarian and could probably even work for a more modern RPG. The first thing I thought of when seeing the “corporate lobby” map was a futuristic bank, which, of course, made me want to run a futuristic bank heist. The starship deck open to space also recalls the classic trope of characters trying to avoid getting sucked out of the ship, while also knocking something else free to the void, so I can understand why it was included.

Sci-Fi assets are always harder to procure for RPG purposes, at least in my experience. In fact, I’ve been leery of running Sci-Fi games that lean towards tracking tactical movement, just because I don’t want to feel like I’m “squinting” at my fantasy maps to make them work, like I did when I was running Star Wars Saga edition. I like having a purpose-built set of tactical maps for science fiction games.

It’s hard to say right now, after a year of running games online, but I am definitely a fan of the larger form factor of the Giant Books over the smaller versions of the maps. I can understand the utility of the Little Books to provide add on locations, but one of my biggest concerns about trying to tailor my battle maps in a game to a specific encounter is the effort it takes to yank the map that is already on the table and replace it with a new one. I really like the concept of making room for the book at the start of the game, and just turning pages until I hit the terrain I want to use. 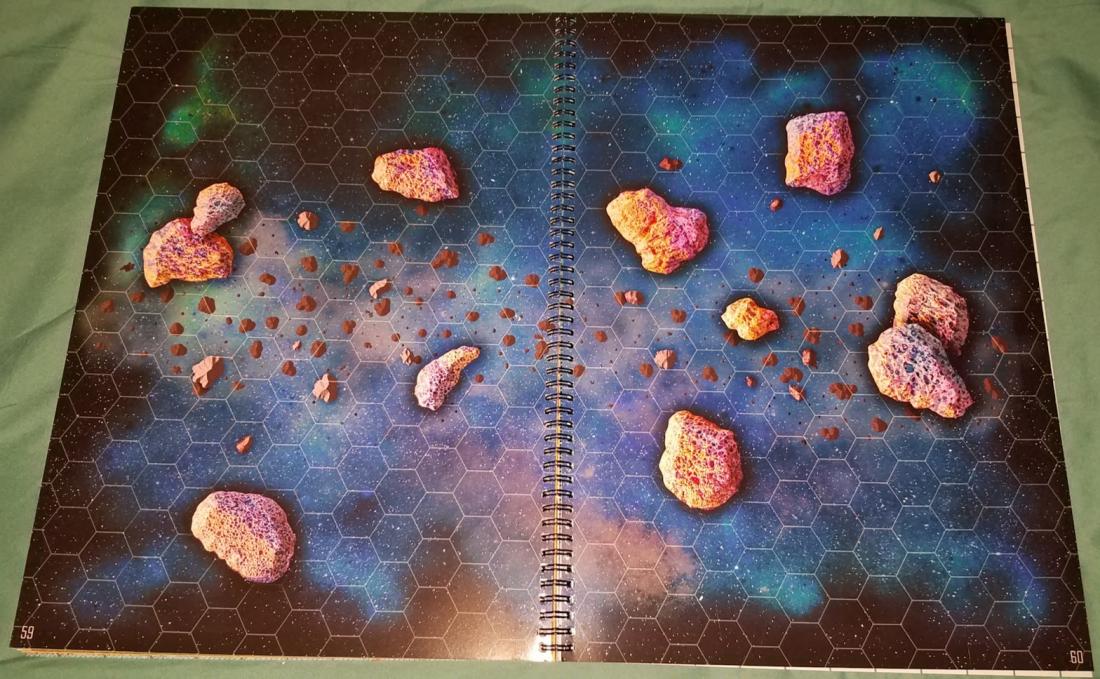 I’ve been running games online for almost a year now. At the start, I was using a smaller map that only I could see, moving characters on the map, and keeping the PCs appraised of what the map looked like. I don’t like overly complicated VTTs, because I get easily distracted by bells and whistles. I eventually gravitated towards Owlbear Rodeo, as a tabletop solution that is focused almost entirely on sharing a map and tokens with a group online.

In the months that I have been using Owlbear Rodeo, I haven’t purchased any extra maps beyond what the product already provides. Because I liked the look and the utility of many of these maps, I picked up the digital version of these maps so I can start using them for my online games.

In particular, I would have loved to have had the hex maps for the Star Trek Adventures games that I ran which involved large-scale tactical combat during the Dominion War.

I’m extremely interested to get some feedback from my payers on the digital maps that I’m going to start using, and once (if?) I get the chance to play a game face to face again, I want to see how easy it is to switch between maps, and what kind of impression they make. I know I like how these look.

If I were to pick up one more of the Giant Books, it would be the Giant Book of CyberPunk Battle Mats, since the “near future” look of that product looks like it would be a good product to have handy not only for cyberpunk media, but also for superhero games or modern action games.

Â I like having a purpose-built set of tactical maps for science fiction games.Â

In addition to the CyberPunk Battle Mats, I am extremely interested in getting my hands on the Magic Effects Scenery, not only because the effects look like they would be evocative to have on hand, but also because I like to have a colorful and thematic way to measure spell areas.

Overall, looking at these products is really rekindling my desire to get back to some face-to-face gaming in the future.

What are your feelings on battle mats? How many do you own, and do you go for detail or utility? Do you have terrain for your battle mats, or do you focus on drawing anything special that needs to be represented? We want to hear your thoughts on battle mats in the comments below!