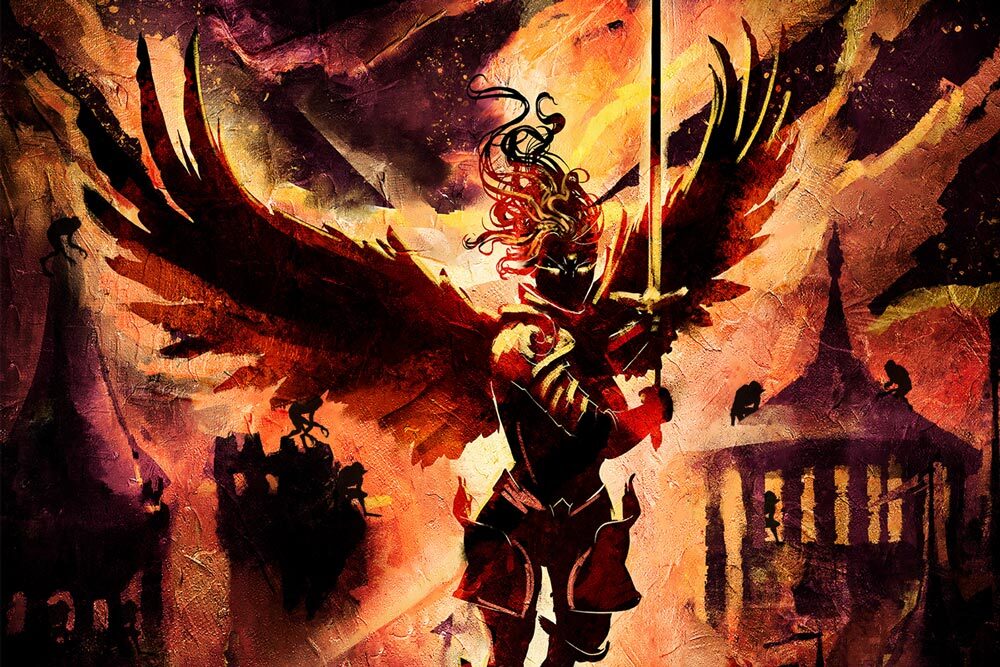 For today’s article, I picked two random monsters from completely different games, these being the Fire Giant from D&D and the ghasts from the Lovecraftian stories (which are a bit different from those presented in other games). Let’s create a scenario in which it would make sense for these two to work together, do some modifications, and lay out everything you might need to add to your game.

Let’s research a bit about these monsters so we can build something from what they are and their lore.

D&D 5e states that these monsters are creatures that live in rocky mountains near lava, magma, or places with extreme heat. They are crafty forgers of great weapons and fortresses, giving great use to iron. Moreover, fire giants use the lumber from their surroundings to have their smithy keep going, so it wouldn’t be weird for them to cause deforestation.

These fire giants create feudal societies where the greatest smithies and warriors acquire the highest roles. In other words, if you are neither a good crafter nor a skilled fighter then you are not of importance to them.

So far there’s quite a lot we can work with just from what D&D tells us. However, fire giants are creatures from Norse mythology. In their tales, fire giants are those creatures in charge of putting an end to Ragnarok, killing everyone by surrounding them in flames as they ride in their great horses. Once everything is burned down, it’s time to start over. Amazing! Let’s find a way to mix this all into one interesting story!

Ghasts are humanoid creatures with a vaguely human face, but lack noses or ears. They also have kangaroo-like legs which they use to hop around moving at high speed. They hide from sunlight, making sure to move in the darkness of the night, getting destroyed otherwise. Ghasts hunt in packs, practicing cannibalism if they get too hungry. All this information makes them distinctly different from your average zombie, and a bit closer to the “infected” from movies such as ‘World War Z’ or ‘I am Legend’. We can steal a bit from there if we like as well

One thing I do very much enjoy about how these undead creatures are portrayed is their kangaroo-like legs. A zombie may be able to run through the streets trying to get to you, but try to picture a horde of these things jumping 30ft high as they run on four legs. That makes them both fast and able to jump over buildings in the streets. Now picture 40 of them running towards you in the middle of a city as they jump over buildings. That’s quite the nightmare!

Now that we fully know and understand our monsters… how can we make them both make sense? There isn’t much of a point of union between the two, and they don’t share many things.

Let’s make our villain a female giant, mostly because I want to stick a bit more with Norse mythology and give her a Valkyrie armor, except its all made out of dark iron. Her shoulder pads blow out fire and her long hair looks as if the fire was coming out of her head. She is a spellcaster, taking her power from the Forgotten Gods. They grant her the necessary knowledge to invoke ghasts by doing rituals. She rides a ghast made out of the corpse of a giant that she uses as a horse. She was named Herja, also known as the “Devastator”. Let’s also give her a fiery ax because that just looks extremely metal and we don’t see enough fiery axes.

Ok, now we have the character and why she can summon ghasts. What’s her purpose? What does she want? Herja was the fire giant in charge of taking care of the slaves that mined the mountains. When the slaves didn’t come back she went to investigate, finding an altar to an old forgotten god. The god talked to her through the altar and charged her with a vital mission. She was the one in charge of resetting the world to its core. Humanity has lived long enough and now it’s time for them to perish for the cycle to start over. Blinded by this ideal, Herja is ready to carry her task, building an entire undead army of ghasts.

Herja and her undead army come from the mountains, shining in the dark, with a horde of creatures that move by jumping next to her. They first start raiding small villages to gather more corpses and build a greater army. Once the army is big enough she starts to raid cities and capitals. Herja is known to breathe fire from the magic given to her, allowing the giant to burn down civilizations in a much faster manner. If the city or town is near a forest, she is known to set it ablaze before starting her raids. If you are playing D&D, give her the breath weapon of an adult dragon.

This monster group can be easily ported to most RPGs. Picture this like the horsemen from the Apocalypse, except it’s a giant and her army of undead creatures. In superhero rpgs, it’s a pretty big menace to stop that may be conquering the world starting from the north of Europe. A Lovecraftian game can have Herja be a ticking clock that needs to be stopped getting some artifact before she erases existence, going a bit heavier on the horror theme of it, or having her ghast army expand all over the world before her arrival. For fantasy rpgs, just use the normal stat blocks for these sort of creatures and change what you feel necessary.

What do you think of this giant + ghast army? Is there anything you would change about it? Are you looking forward to adding them to your game? If so, what system are you using and how do you intend to have this army appear? Let me know in the comments below!