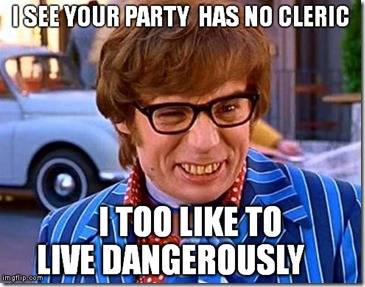 I’ve been in and out of a gaming slump for a while. It started when I moved to Mississippi and all of my gaming opportunities dried up. Though I started groups down there and ran a lot of one shots, I just never got any consistent gaming going on. Now I’m on the stable side of a move back to Ohio and living in a place where there is a ton of gaming to be had, but I’m not yet into it and am still working to get a new group together. I realized today that tabletop gaming fits a bit oddly on me now — like I gained or lost some weight and the clothes fit, but they don’t wear the same as they did.

In some ways, it’s made me a little nervous about running games — it’s given fuel to that little voice in your head that tells you bike riding is hard if you haven’t done it since you were a kid. It’s the same kind ofÂ  feeling I get if I’ve run a bad game. You wonder if you’ve still got the mojo. I’ve been thinking long and hard about how to get that fire stoked back up, because one thing I know is that talent is always trumped by work, and we are all better at what we do than we give ourselves credit for. So, here are some things I did while I was in my slump and am doing to fuel the fires of my mojo so I can tackle my next game with every bit of fervor I’ve got.

1. If You Can’t Get Into A Dedicated Game, Get Into Any Kind Of Game You Can

I spent a lot of time without any dedicated gaming group and a schedule that wasn’t conducive to getting one together when I was living in a very rural area. Since I couldn’t find a geographically local group, I did a lot of gaming online. I ran a lot of one-shots with vastly different groups of gamers since we couldn’t commit to a regular schedule. The important thing was that I got the gaming going on in at least some way, even if it wasn’t perfect. There’s no way to avoid the change that occurs in our lives because we get a new job, because we grow older, or because we move — so embrace it and modify yourself to be able to still get some gaming in and keep the spark alive.

One day, I remember sitting around doing some work on a book I was writing and just being unable to get into the source material. I had been feeling the drag of not having a consistent game and was feeling like an impostor writing when I didn’t have a lot of recent GMing going on. I needed to do something, because the deadline was looming and the old gearbox of my brain wasn’t clicking together. I dug through my music and found a folder of mp3s and the playlists I used for an old World Of Darkness game. I threw it on and sat there for about 15 minutes, then I pulled out the notes from that game and read through, remembering “Statue, Statue, Statue — DEATH!” and the way a player got nervous whenever I played Whatever Lola Wants or the way another player heroically sacrificed himself to prevent from becoming the avatar of Set. After I finished my trip down memory lane, I busted out a few thousand words. All I needed was that little bit of invigoration to remind me that this IS a vibrant part of me, even if I had a game going on. This holds true if your slump is because you ran a bad or a lackluster game. We all do, but we need to remember that we’ve run great games as well.

3. Immerse Yourself In The culture

I think I bought more gaming books during my slump than I ever did during the times I’ve been actively GMing a campaign. Even if I couldn’t get a dedicated group together I could crack open a new book and read through it. I also went online a lot to see what people were saying. I’m horrible at maintaining a posting presence in forums, but I stalked the heck out of gaming forums to see what was going on and what people were saying. Also, I travelled much farther than I normally would to go to conventions. For a while, I was a groupie for Clint and Jodi Black’s company Beautiful Brains. They lived a state away and were going to all the southern conventions they knew of. It was through them that I found out where and when the conventions were. I would pack up at the last minute and drive 3 or 4 hours, fiance and friends in tow, to spend a weekend at a teeny convention just to get a little gamer culture in. It was all worth it. These were lifelines that kept me excited about gaming and counteracted the negative feelings that a slump will make you feel.

One thing not having a lot of time to run a game does is give you a lot of time to think about running a game. Even if you know it will be a few months or a few years before you get to run it, sitting down and writing that dream scenario, setting, or writing about the adventures of a keynote character after the campaign ends are all ways to keep your gaming brain active. There are a ton of ideas I get from playing in games and running games, but I never seem to be able to get them all on paper quick enough. Sitting down to write that scenario out will give you something ready to pick up with excitement when you have the opportunity to game again.

5. Don’t Get Down On Yourself

We get into slumps in our gaming for plenty of reasons. We all lose the time to game like we want. When we have bad games, we get little imps of the perverse that tell us that’s all we’ll only ever run bad games again. But, in reality, we run games because we love to run games and interact with our friends in these incredible rich narrative settings. There is something about tabletop gaming that you can’t find in any other medium, and even if we aren’t getting in the gaming we want at the frequency or quality that fulfills us completely, we can’t let it get us down. In all of our lives, not just the gaming side of it, we have to remember that there is no such thing as a failure we can’t recover from, or a void we can’t someday fill.

The most important thing to remember about getting into a slump is to realize that there is a way out if it, but you often have to make the path yourself and keep the fires of your passion lit so you can see the way out. So, how do you get yourself motivated when you are in a slump about gaming? What techniques do you use to stay excited when you haven’t gamed for a while? What reminds you you are a good GM even if you’ve run a bad game?