I recently had the opportunity to obtain a copy of the Ghostbusters II RPG, by West End Games. This game has been out of print for over 25 years (cough, cough), and I had not seen a copy of the game, nor run it, in the same amount of time. Being someone who does not run games a second time, and is of the “cult of the new”, I had reservations about bringing a classic like this to the table. I also had concerns about how my contemporary GMing style would mesh with a game this old. Today, I thought I would share what I learned bringing this classic to the table, things that could help you next time you bring a game back from the dead.

Dead Games…No The Other Kind

Let’s start, as I like to do, by defining some terms. In this case lets define Dead Game. I am going to say that a Dead Game is any game that is no longer being actively printed or developed by a publisher. This makes them a bit different from OSR games, where publishers are developing new material for older games (or their clones). We are also not talking about campaigns you ran and killed, and are running again. Dead refers to the Game and not the Campaign.

When I think back to the many games I have played, there are a number of favorite Dead Games that come to mind:

What are the steps to getting a Dead Game back to the table?

If you don’t already have the game in your collection, then the first challenge you will encounter with Dead Games is finding a copy. Many online and brick & mortar game stores have a selection of used games, and if you are lucky you may run across some gems. If you strike out there, you may find what you are looking for on Ebay or Craig’s List.

Depending on how popular the game is, will determine the market price. Prices can vary wildly between different dead games. Copies of Ghostbusters go for about $90.00 on Ebay, where a used copy of the Top Secret rules go for $25.00.

If you are not concerned about physical copies, you may be able to find a PDF version of the game. Depending on the age of the game, the publisher may not have created a PDF, and you may need to look in the darker corners of the Internet. If you are able to find a fan-made one, the quality of the PDF may vary.

In the case of Ghostbusters, I was fortunate to receive a copy of Ghostbusters II as a gift from a fellow gamer, who thought it would be nice to see the game go to a table where it would get some play. The game was intact, but was missing the Ghost Die. There are also PDF copies of the rules out on the Internet (just Google).

The original Ghostbusters game came with a set of equipment cards, which I wanted to use in my game. Also I was missing the specialized Ghost Die. All was not lost though, because the Nerdy ShowÂ re-created and updated the Equipment Cards and Ghost Die, and sell them to people looking to re-create the game.

Â Depending on your exposure to other games of that era, these older rules may feel dated or absurd compared to modern game design.Â

Once you have a copy of the game, now its time to re-learn the game. When learning the game, keep in mind the time period when the game was created. RPG’s, much like other entertainment media such as books and movies, are products of their time and can feel dated in rules, setting, or both.

In the case of rules, games of the same time periods have similar kinds of rules. There has always been a certain amount of design bleed within a cohort. For example: many 80’s games can be chart heavy, with either a central chart for task resolution or hundreds of charts for every kind of action. Depending on your exposure to other games of that era, these older rules may feel dated or absurd compared to modern game design.

I was in luck. The Ghostbusters mechanics were surprisingly fresh. The mechanic is a simple dice pool, roll vs. target number. The core mechanic was quite flexible,which was going to work with my current preference of how I like to run games. The only thing that I found a bit dated was some of the examples in the rules, which called for skill checks to be made to get out of bed, and other things that I would normally just hand-wave.

Settings are products of their creators, who in turn are products of their times. So a far future sci-fi game may describe computers that are the size of rooms, or have building maps complete with pay phones, and will not take into account contemporary advances in science and technology. Setting elements which are anachronistic can create barriers for us from becoming immersed.

Here is where things start to feel dated. This game was made in 1989, and has references toÂ payphones,Â and very expensive cellular phones which you could get installed into your car. Forget any ideas like keeping theÂ Tobin’sÂ Spirit guide as an app on your phone.

After reading through the rules and learning the mechanics and the setting, you can then decide if you want to make any changes to the game before bringing it to the table. Much like above, you can adapt either the rules, the setting or both. When it comes to the rules, my suggestion is to keep as much of the game as intact as possible. This way the game you are running is the authentic experience of the game as it was intended. (Again, I am one of those ‘rules inform play’ people, so take that into consideration.)

Ghostbusters II has a set of rules for Encumbrance, which I found a bit tedious, so I opted to use the original Ghostbusters equipment cards instead. Everything else I kept as written.

When it comes to the setting there are a few different ways to go. If there are dated elements in the setting, you could just edit offending elements out, such as removing pay phones in a sci-fi setting. You could change the whole setting, like changing the default time period of Top Secret SI to be today. Finally, you could just embrace the setting with its flaws and all, such as playing up the 80’s stereotypes in The Price of Freedom.

For Ghostbusters, I decided to play in modern times. I made up a quick backstory about how Paranormal Extermination fell off around the turn of the century, and then picked up in 2014 when the original Ghostbusters were involved in a 7-fold tear incident in Los Angeles.

So How Did It Go? 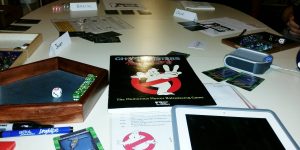 For my first session of bringing Ghostbusters back, I read the rules and picked one of the introductory adventures in the rules; a simple haunted house. I pimped my game with the Nerdy Show’s equipment cards and Ghost Die. I adapted the game, by dropping the Encumbrance rules and moved the setting to modern times.

Our session consisted of character creation, which was quick, and then heading into the haunted house. The rules were easy to teach, and flexible enough for me to adapt the adventure as we played. In all it was a successful session, and felt like the movies.

For me, Ghostbusters stood the test of time, and is a game I would be happy to run again in the future. The next time I run it, it will be an adventure that I will write myself. (I have some ideas of something to adapt from the Ghostbusters comic book…)

Just because a game is Dead does not mean that it can’t be fun to play. Dead Games are a product of the times in which they were created, and may feel a bit out of place. By studying the rules and settingÂ andÂ adapting it where it needs some modernization, a Dead Game can come back to life.

What are some of your favorite Dead Games? Which ones have you played recently? What changes have you made to make them more playable? How was your experience running a Dead Game?