Angela Murray
May 21st, 2015 | GMing Advice | Printer Friendly
The genre is broad and deep with numerous variations that could all make for a great game.
On a whim, I went to see Mad Max: Fury Road this past weekend. I cannot adequately express my fan girl glee at this movie without descending into nonsense and Kermit flailing. OMG I LOVED IT SO MUCH! The cars, the costumes, the explosions, the CHASE. Oh what a day. What a lovely day! Besides reminding me of how much I loved the original movies, it also fiercely rekindled my desire to run a post-apocalyptic game.

I’ve wanted to run a post-apocalyptic game almost since I got into GMing. My first love with gaming are supers games, so my very first game was, of course, a Mutants & Masterminds super powered extravaganza. While I’ve never actually started a post-apocalyptic game, they’ve always been a close second on my mental list of games I want to run. There’s just something about stories of resilient, desperate people trying to survive and thrive in the skeletal remains of our modern society. Suddenly familiar places like a college campus or a downtown shopping district take on a whole new meaning.

So what’s stopping me from running one? Well, besides all the multitude of other games my group is currently rotating through, it boils down to a bit of analysis paralysis. What kind of post-apocalyptic game do I want to run? The genre is broad and deep with numerous variations that could all make for a great game. 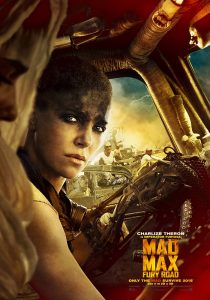 I really do highly recommend it. It’s high octane from start to finish.

Do I go full-on Mad Max with roaring vehicles racing across the ruined landscape while they fight over precious resources?

It’s an iconic setting of the genre and an exciting one at that. Most players would get the setting without too much explanation, but whatever system I use has to be able to handle the vehicle combat in conjunction with my narrative style. I don’t do hardcore crunch particularly well. There’s also the lone-wolf problem with converting the series to an RPG. While Max himself is okay as a loner that comes and goes like the harsh, radioactive wind, that doesn’t really fly in a tabletop RPG. The game pretty much needs a degree of cooperation between the characters to work. Of course, there is something special to be said for getting away with designing a vehicle around amps and a flame throwing guitar.

Do I chuck technology out the window and create a world thrown into dark ages chaos like the one in the Emberverse series?

This is the one I keep coming back to and flirting with. I absolutely loved SM Stirling’s books (staring with Dies the Fire) and how they showed the collapse of our technologically dependent society and its rebirth in the wake of the strong people that stepped forward to save who they could and rebuild society each in their own way. The television series ‘Revolution’ had a similar taste even if it didn’t quite go exactly the same route. The question always come back to why, though. Why does technology stop working? Does the game revolve around bringing it back or is it just a hand-waved feature of the campaign? When you’ve got smart players, it’s very important to make sure you’ve done your world building properly to prevent the game from collapsing in on itself the first time a player starts poking it with a pin.

Do I push it into the future where the players have all grown up in a broken society that only partially remembers the past, much like Logan’s Run?

Dystopic might be a better term for these games, but there is definitely some overlap. Even the Hunger Games features a hint or two about the world that was. There is something to be said for exploring the crumbling remains of the world we inhabit every day with characters that have no clue what they’re experiencing. The problem, though, is that it’s actually very difficult for players to completely divorce their own knowledge from that of their characters. I’ve played games before where the GM would practically do contortions to describe perfectly mundane objects, like wall-to-wall carpeting or an elevator, in terms that didn’t come right out and call them that. Unless done absolutely perfectly, it always felt awkward and forced. 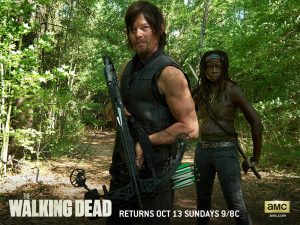 Not my show, but I know plenty who love it.

Do I have aliens invade and nearly destroy the world, forcing the survivors to fight in an alien world built on the back of the world we know?

Aliens showing up and mucking things up makes for a great explanation on why everything’s gone to hell and it gives the players a ready-made enemy to face. Of course, for your game you have to decide how bad it’s gotten and how much of an underdog the players and other survivors are. Are they trying to survive in an alien landscape that overlays what we once knew like in SciFi’s show Defiance? Or maybe they’re fighting to drive off invaders in the shattered husks of our cities like in John Ringo’s Posleen War series?

Do I put zombies in it?

I’m not even going to bother directly referencing a particular show about ambulatory corpses because I’m sure you get the drift. Zombie stories bridge the gap between horror and post-apocalyptic and deserve a place on the list even if they’re not really my cup of tea. There’s always a hopelessness to zombie stories that goes against what I really enjoy in games. Still, they make a great end of the world enemy. If zombies make an appearance in any post-apocalyptic game of mine, they’ll be a minor (if dangerous) nuisance rather than a global menace.

And there’s why I keep going around in circles about what type of post-apocalyptic game to run. I haven’t even started to touch on what system to use. Do I try and fit Apocalypse World to my needs? Do I go with something generic, like Savage Worlds or GURPS? Do I just adapt some other system I’m comfortable with and go from there? What about the games over the years that were designed to be run in the genre, like Gamma World, Aftermath!, Exodus, and so on?

Someday I’ll snap out of my indecisiveness and start a game at the end of the world, but in the meantime, let me know what type of game would appeal to you, either as a player or as a GM. What would your game be like?

37 Responses to An Apocalyptic Question