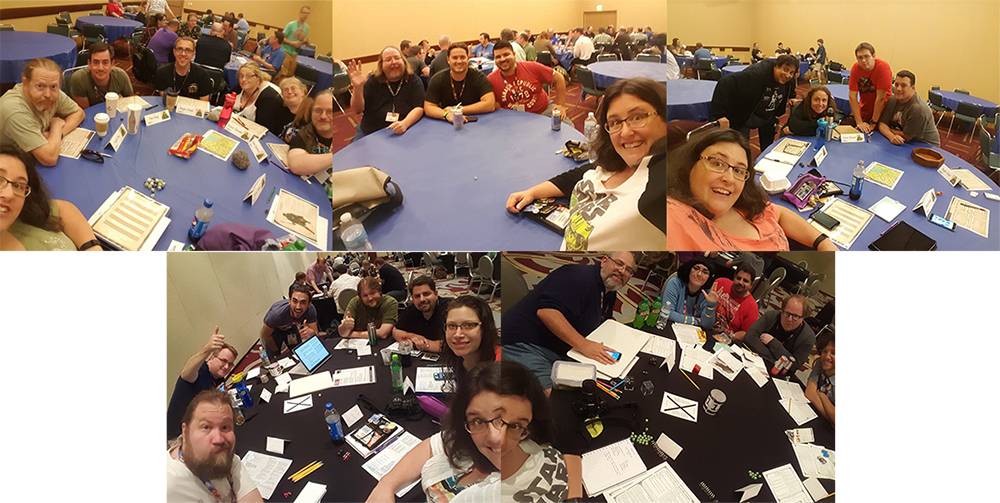 #tableselfie! Only five games at Gen Con, but still got a #tableselfie for each one.

So, this post is a little later than I would like. Gen Con ended on August 7th, but in between then and now, I had to drive back from Indianapolis and then go through the circus of closing on a house and moving into said house. I still don’t have all my stuff in the new house, but close enough. It’s been a crazy two weeks.

Anyway, Gen Con was awesome as always, but man was it hot. I’ve been attending Gen Con since 2006 and I think this year gave us the most consistently hot weather of all those times. Every day was 90+ degrees with 90% humidity. While all of the events are inside, you still have to get from one location to another. Saturday reaching only 85 felt wonderful.

Georgia Street, heading to the ICC

Inside the ICC main hall

This was Thursday. Imagine Saturday.

The heat certainly didn’t hurt attendance, though. While the numbers didn’t top last year’s record, there was still 60k people in attendance. Sometimes looking around the convention center and through the dealer’s hall it absolutely felt like there were that many people around. I was really glad to get a downtown hotel this year so there was no messing with commuting or parking.

Because of everything else going on at Gen Con, I didn’t get to play or run as many games as I did at Origins, but I still got some great games in. I ran three sessions of Lone Wolf for Cubicle 7 and had three great groups of players. The first group actually had a couple from my home town that had played in one of my games at a small local convention. Also, for the very first time, I had a player ‘recognize’ me as a Gnome. That was a pretty cool moment among some awesome games.

For the games I played, I was able to get over to Indie Games on Demand twice. I highly recommend hitting them up for games. They’ve got a great system down and it’s a great way to play some games you may not otherwise get to experience. This year I got to play Masks and Lady Blackbird. I’m eagerly awaiting my copy of Masks to show up in my mailbox.

SITH! (I love the lighting in this one)

Another Rey and a Finn!

I asked for her picture, and she dropped to the ground.

Soooo much cosplay. While it doesn’t quite hit San Diego ComicCon levels, the folks who put effort into their cosplay for Gen Con do a great job. This is just a fraction of the pictures I took and that’s a fraction of the number of great costumes I saw. There were a bunch of lady Ghostbusters, but I never got a chance to get a pic of one.

The two costumes I was happiest to see were Tali and the Warden from Mass Effect and Dragon Age respectively. I’m a huge Bioware fangirl and seeing those games still be popular enough to spawn cosplay warms my nerdy heart.

This lasted for about 30 seconds, but I still can say I did it.

I can’t talk about Gen Con and not mention Pokemon Go. The popularity of the game was obvious just looking at the dealer’s hall and seeing the giant Pikachu floating over a booth dedicated to Pokemon swag. Or, if you popped open the game itself, you’d see every Pokestop tagged with a lure throughout downtown pretty much nonstop from Wednesday to Sunday.

The gyms throughout the city kept changing hands at an alarming rate. I do have the screenshot to prove that I very (VERY) briefly held a gym all on my own. The Haunter wasn’t my highest level character, but was the highest one I had left in full health after barely scraping by taking over the gym. I think my claim lasted all of 30 seconds.

Billy the Waiter, our Magical Master of Dinner

My highlight of the convention, though, was getting to spend time with my fellow Gnomes. On the night of the ENnie Awards, we met beforehand for a lovely dinner at St. Elmo’s where we’re served by the amazing and magical Billy the Waiter. This year was all the more special with the addition of the new Gnomes getting to join in on the festivities. 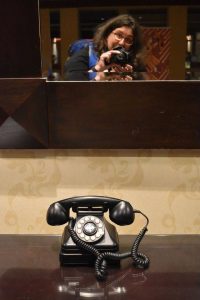 All in all, it was a great convention and I’m looking forward to 2017 and the 50th anniversary of Gen Con. Even with the heat and the crazy crowds, you can count on me making it there again.

Did you get a chance to hit Gen Con this year? What were your highlights of the convention?