Dragonriders of the Suggestion Pot

Dragon Rider, A New Prophecy by ~valadant on deviantART 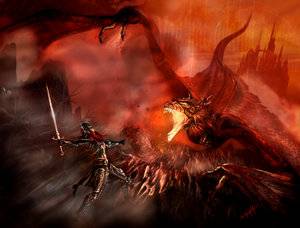 I was adding some tarragon and parsley to the suggestion pot earlier, and what did I come across? Jim C asking the following:

Hey Guys,
I actually a couple of questions/suggestions/topics for thought, all from one game idea.

A while ago a friend of mine had an idea for a game about dragon riders. The game never actually happened; I think he couldn’t find a system he felt would allow his vision to play out happily. So first up: What if your homebrew setting idea doesn’t fit into an obvious system?

The obvious idea was to play using any system and just giving your fairly typical each player a loyal dragon companion, the issue here is that he wanted the dragons to be fully fledged personalities in themselves. So how’d this be possible? In essence how do you have recurring and powerful intelligent, but essentially loyal npcs. How do you manage when a players mount, rather than a well trained warhorse is fully intelligent and able to (and should) question what’s asked of it? A similar question can be asked about systems which have intelligent familiars?

Final question is about the other way of handling it; the Dragon is played by a player as is the rider. How could you handle such a potential disparity in PC ability?

There are a lot of ways to handle a game like this, but they’re specific to the experience you’re building. Are we talking about players riding something like D&D’s dragons, something “dragon-like” like a smart pterodactyl, alien beasts that are kind of dragon shaped (like Dragon Riders of Pern), Eregon, or something else? Each of these has a different feel: the D&D dragon’s rider feels a bit like a mascot, unless they’re very high level characters and you give them something appropriate like Krynn’s Dragonlances; the pterodactyl rider is much closer to a Paladin with a smart and magical warhorse, while aliens can be “space horses”, but intelligent ones are often a chance to look at a culture that’s entirely unlike our own; and Eregon was a quick read too long a go to give you good advice– sorry.

I suspect we’ll do better tackling your questions one by one, so I’ll try that from here on.

So first up: What if your homebrew setting idea doesn’t fit into an obvious system?
It all depends on your temperament and abilities. For some people, particularly GMs and tinkerers, a strong vision and no good system on the market to play will encourage them to try their hand at game design. If your friend is already twiddling with systems and is thinking about implementing a horde of house rules to make it work half-way, suggest that he go full out and make a system that does what he wants from scratch. Of course, suggesting that is volunteering to be a playtester… so make sure that you’re up for that process. It’s not much like playing a game with finalized rules, especially not at first…

Another factor to consider is what type of plots you intend to use focus on. If the game is all about intrigue and the dragon rider’s guild is just another faction jockeying for influence in the kingdom, then you’ll treat it very differently from a world at war, where countries use dragons like we use aircraft today. For intrigue, you could easily play with half of the players as dragons, with their own perspectives and goals that they’re trying to achieve through their riders, and the other half as dragonriders, treated as mere soldiers by some factions, and as deluded dragon lovers by others… any system that handles intrigue well could probably handle your game well. If, on the other hand, your dragons are more like aircraft, your system might have the dragon dogfights be based using the dragon’s stats, with the characters just contributing a few modifiers.

The obvious idea was to play using any system and just giving your fairly typical each player a loyal dragon companion, the issue here is that he wanted the dragons to be fully fledged personalities in themselves. So how’d this be possible? In essence how do you have recurring and powerful intelligent, but essentially loyal npcs. How do you manage when a players mount, rather than a well trained warhorse is fully intelligent and able to (and should) question what’s asked of it? A similar question can be asked about systems which have intelligent familiars?

This depends on many factors, including group size, degree of personality the dragons have, and a few other things.

If everyone wants to play dragon riders, then you have to stretch a little. One of the best solutions I saw was in Wraith, where you played both your own character, but also the character to your left’s Shadow. During a session you would mostly play your own character, but you would also whisper temptations to the neighboring player as their shadow and offer them sweet sweet power. For this game, you could each play your own dragon rider, but also play someone else’s dragon. That would allow huge flexibility to your group: you could have dragon rider scenes, where everyone plays their primary rider character and tries to navigate human society as dragon riders; dragon scenes, where we see that dragons aren’t just mounts, but have personalities and goals of their own, and mixed scenes, where “splitting the party” isn’t a big deal because everyone still has a character to play– a few people dragons, a few people dragon riders.

You can also handle this with the GM running the dragons, but this will work best only if the dragons aren’t constantly talking to the humans. If you’ve read Mercedes Lackey’s Valedemar books, companions and bond birds are both easy to give some quick flair– like any recurring NPC– but they rarely get into long conversations with the PCs. A geas, reluctance on the dragon’s part, or the risk of driving the riders insane every time they talk might work for your game. In any case, if the GM is handling the dragons, you’ll want a smaller group– probably a 2 or 3 dragon rider game.

Final question is about the other way of handling it; the Dragon is played by a player as is the rider. How could you handle such a potential disparity in PC ability?
If players want to play dragons, you’re in luck: many systems have ways to scale back and develop “monsters” similar to PCs. If you played Mage: the Ascension, creatures like gryphons and dragons could be easily played alongside the primary PCs, and they grow using the same rules as PCs. Similarly, in D&D3, Savage Species allowed you to break monsters into levels paralleling PCs levels. It was rarely perfect, but it would make at least a roughly comparable party possible.

It also depends on what the disparity is. If the problem is that dragons are deadly in combat, then you just need to mix up scene types: not every problem can be solved by fire breath and claw. If the disparity is that the dragon PCs are better than the non-dragon PCs in every way (shapeshifting, intelligence, cool combat powers and legendary toughness…), then your answer probably depends on why the dragons bother with riders in the first place. Are there things that dragon riders are necessary to accomplish? If so, concentrate on those scenes to make sure we remember that dragon riders are necessary and cool. Make sure that the riders remain necessary throughout– for politics, turning away angry mobs, explaining the disappearance of livestock to the king, etc.

How would you handle it?
That’s my stab at how I’d approach it. It’s unfortunately pretty vague, since there are so many things a good dragons and riders game could be. How would you tackle this? Have you had much success with a “heroes and mounts” game in your group? Is there a system out there that’s perfect for this? Add your thoughts in comments and maybe Jim C will soon be soaring through the sky on dragonback!

9 Responses to Dragonriders of the Suggestion Pot