Deadlands to Fate – The Thrill of Skills

The first test of my conversion of Deadlands Reloaded to the Fate rules set went really well, better than I expected. I had hoped that the rules changes would be able to keep the feel of Deadlands while giving my group a set of mechanics that we were more comfortable with.

If you want a quick overview of my initial goals, you’ll find my first post here.

This post is going to mainly focus on the Skills, with a few words about Powers, Edges, and Hindrances.

Skills, or, How to Do What You Do

The first thing I wanted to do was to make sure that the Attributes and Skills got converted over well. Those are the most often used portion of most systems, and they needed to work well together. I ended up doing most of these conversions on the fly, with my group present, so I could get their input. To that end, I made rough notes as I was working. Here’s a look at the skill substitutions. 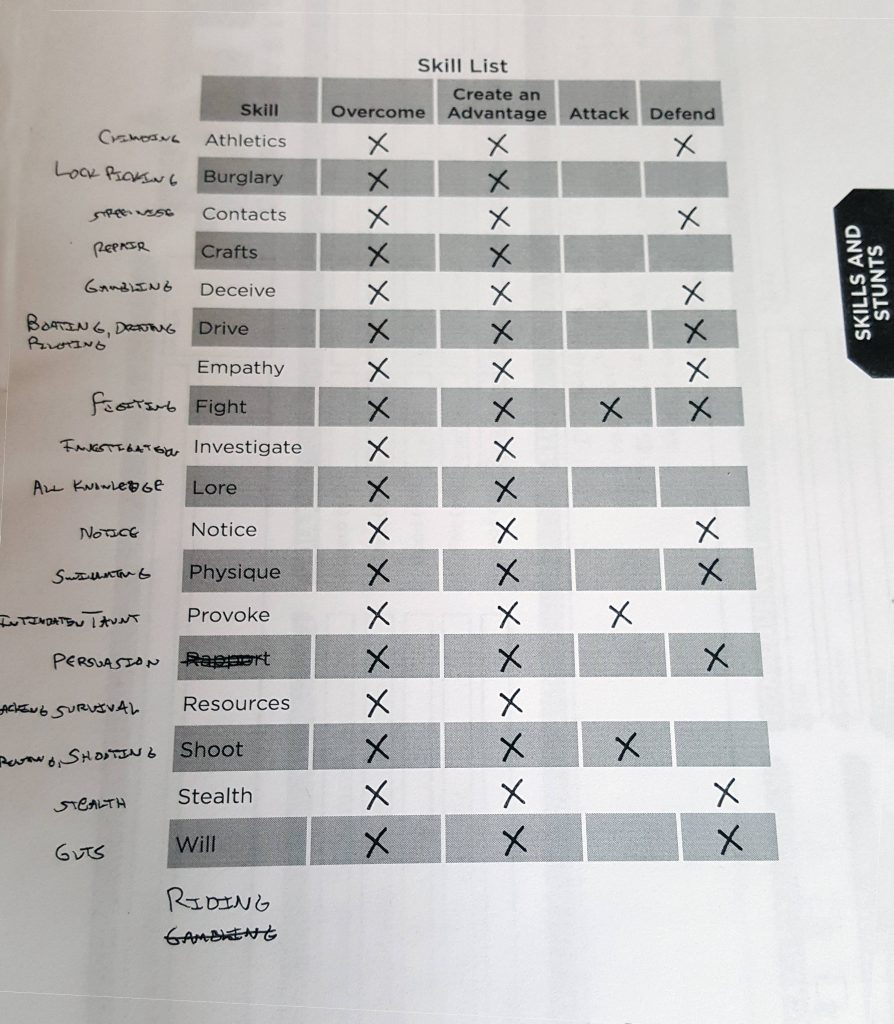 If you’re having a difficult time reading my handwriting (and who could blame you?), here’s the breakdown in text form. Deadlands skills are on the left, their Fate replacements on the right.

Fate and Savage Worlds handle skills differently enough that there are what might look like odd gaps or placements. Fate tends to be more broad about things, and also has things as skills that might be Attribute rolls in Savage Worlds.

Some of the skills mapped 1-to-1, like Fight, Investigate, Notice, and Stealth. Those were pretty straightforward. Others needed some massaging. I combined Boating, Driving and Piloting into Drive, Throwing and Shooting into Shoot, and Tracking and Survival into Resources.

These combinations highlight one of the main differences between the two systems. Fate is all about competent PCs succeeding at what they set out to do. They might take some major bumps and bruises on the way, but they succeed in the end, usually. Savage Worlds is about people hanging on by the skin of their teeth, getting their teeth kicked out, maybe going down, but not going down without a fight.

I bring that up, because I see the skill specialization in Savage Worlds as something that adds to that feeling. You need a throwing skill because it’s different than shooting a gun in a system where it’s interesting to see what might happen when a hero decides to throw a stick of dynamite (or a grenade), but isn’t very good at it.

That difference means that Fate isn’t as interested in the same granularity of skills as Savage Worlds, and that works. For Deadlands it means that I’ll have to find different ways to manifest that tone, ones that don’t lean on the skills.

There are a few skills that don’t really have an analogue in one system or the other. Empathy in Fate doesn’t have much of a match in Savage Worlds, so I kept it on its own. It’s needed to defend against a Deception roll, which would be a Smarts or Spirit check in Deadlands. If I find that too clunky in play, I’ll make Will the defense for that.

Riding I also kept separate because, well, it’s a Western game. To me, in that context, knowing how to ride or not is more important than the Throwing and Shooting combining into Shoot. That’s my instinct anyway. We’ll see if it matters in play.

*Then there’s Knowledge skills and Lore

You can see on both lists that I bundled all the Knowledge skills under Lore. I ended up changing that as soon as we started looking at the characters directly. You see, all three of my characters are Mad Scientists, and those characters rely a lot on individual knowledge specializations, so I kept them individual. I don’t know if that’s something I do in a published, official conversion, but it felt right for these characters. They are narrowly focused, and I wanted them to stay that way in Fate.

Overall, I’m happy with how the Skills look. We played a quick session after getting the characters set up with the new conversion, and they all seemed to work well. More testing will reveal if there are any tweaks needed or not.

Here’s where the systems really diverge. Things like Powers and Edges are a lot like Stunts in Fate. Things like Hindrances are somewhat like Conditions. All of them are a little bit like Aspects. So instead of converting the entire book, I just worked on each of the characters with my players. Check it out: 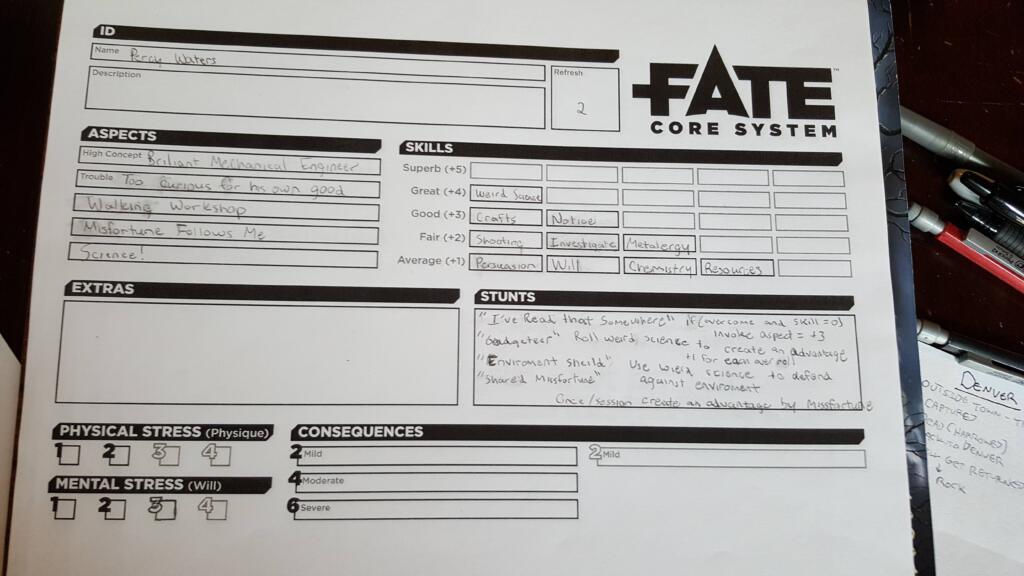 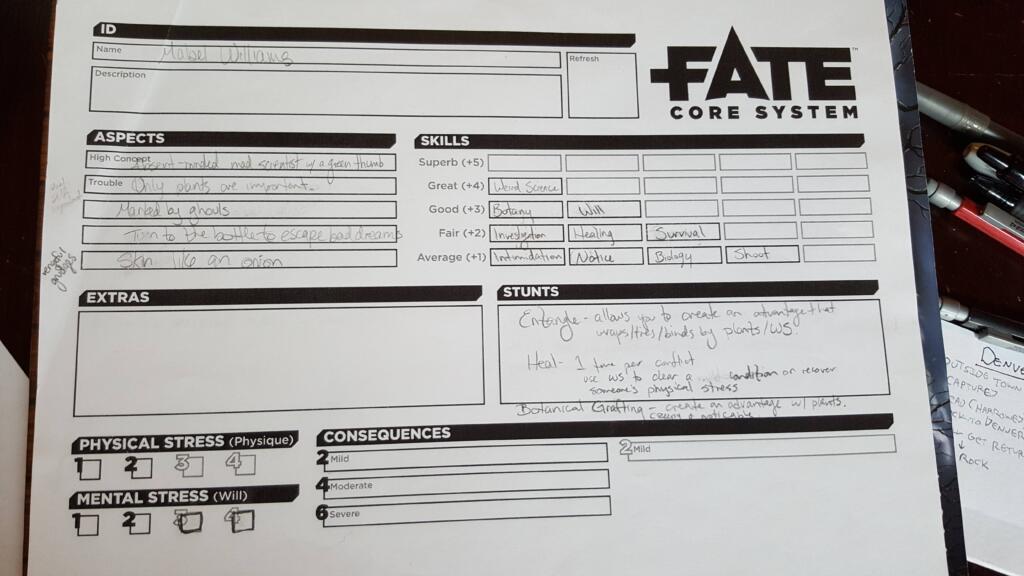 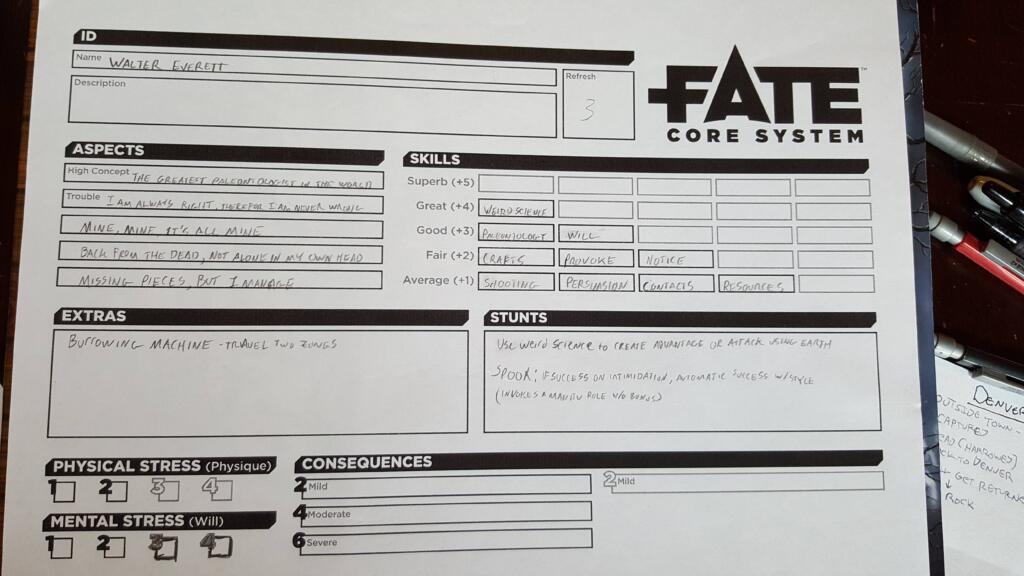 There’s a lot going on there, for sure. In fact, there’s so much that I want to know what you all want to see next. Powers? Edges and Hindrances? A session recap and a breakdown of how I ran the game? Take a look at the sheets, then hit me up in the comments and let me know!

2 Responses to Deadlands to Fate – The Thrill of Skills