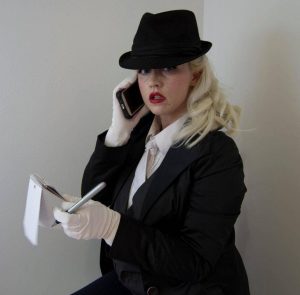 While the players around the table are generally on the same side and trying to cooperate to accomplish a common goal, there are times when secretive or contentious actions need to take place between the characters. There are a few reasons for this, and when done properly, these secret notes can add some spice to the game. Just be careful with them. Players don’t mind it so much when the GM keeps them in the dark, but they get very suspicious (rightfully so) when a fellow comrade in arms begins to keep things from the other players.

It’s pretty clear when a player wants to pass a note, especially if they are at the far end of the table and it has to pass by their fellow players to get to the GM. There’s a code in play here. If a player passes a note via another player, the transporting player is to be nice and not read the note. It’s not meant for them, so they shouldn’t take a peek before passing it along. Likewise, when the players spot their fellow party member tossing a note to the GM, they shouldn’t work “out of game” to try and figure out what’s going on. If the scout is ahead of the group and no one else is nearby to witness a secret action, the obvious presence of a note shouldn’t change how they act or react to the reappearance of the scout. That form of meta-gaming can ruin a perfectly good session and cause more resentment around the table than the note itself.

Stepping Out of the Room

When the note passing between one player and the GM becomes cumbersome, it’s probably a good idea to halt the hastily scribbled missives and step into a side room for a private conversation. This will save some time, allow for better communication, and maybe set the fellow players at ease if it’s the GM’s idea. This will make it seem like the GM is the one keeping the secrets, not the player. It just depends on how things are set up and operate around the table. Personally, I have a voice that projects well and carries. I always make sure I’m not “on the other side of the room,” but in a separate room (preferably with a closed door).

Does the GM keep the notes? Does she read them out loud at the end of a session or adventure? That’s really up to the play style at the table. When I run Paranoia, there is (as you can expect) tons of note passing. People are trying to surreptitiously use their mutant powers, plant a Commie Manifesto in someone’s back pocket, use a device their color rank doesn’t allow, or meet up with a fellow member of a secret society without the rest of the group finding out and blasting their current clone into a cloud of vapor. Because Paranoia is very much a tongue-in-cheek game, I always insist on paper notes, and I keep them all in a hat next to me. When the session is over, I read them out loud to the rest of the table in whatever order they come out of the hat. Even though the official game is over, more hilarity ensues as people try to piece together the content of a note with the context in which it was passed.

Are notes right for your game? This is something that should be clearly spelled out in the social contract you and your fellow gamers have around your table. I’ve easily shifted between note-heavy and “no notes allowed” groups without much heartache. Sure, there are times I wished I could have passed a note in the “no note” game, but I always find a way around it. If you’re the type of player that loves to operate in secret, try to temper your note passing. Keep in mind that each slip of paper passed to the GM interrupts the flow of the game and puts the spotlight on you. This is fine, but don’t abuse it. Pretty soon, you’ll find your fellow players groaning with each scribble you put down on the tiny notepad, and it won’t be because you’re keeping secrets from them.

Have you used secret notes in your game? Care to share your experiences?

2 Responses to Passing Notes In Class