The Four* Encyclopedias of Daniel Cohen 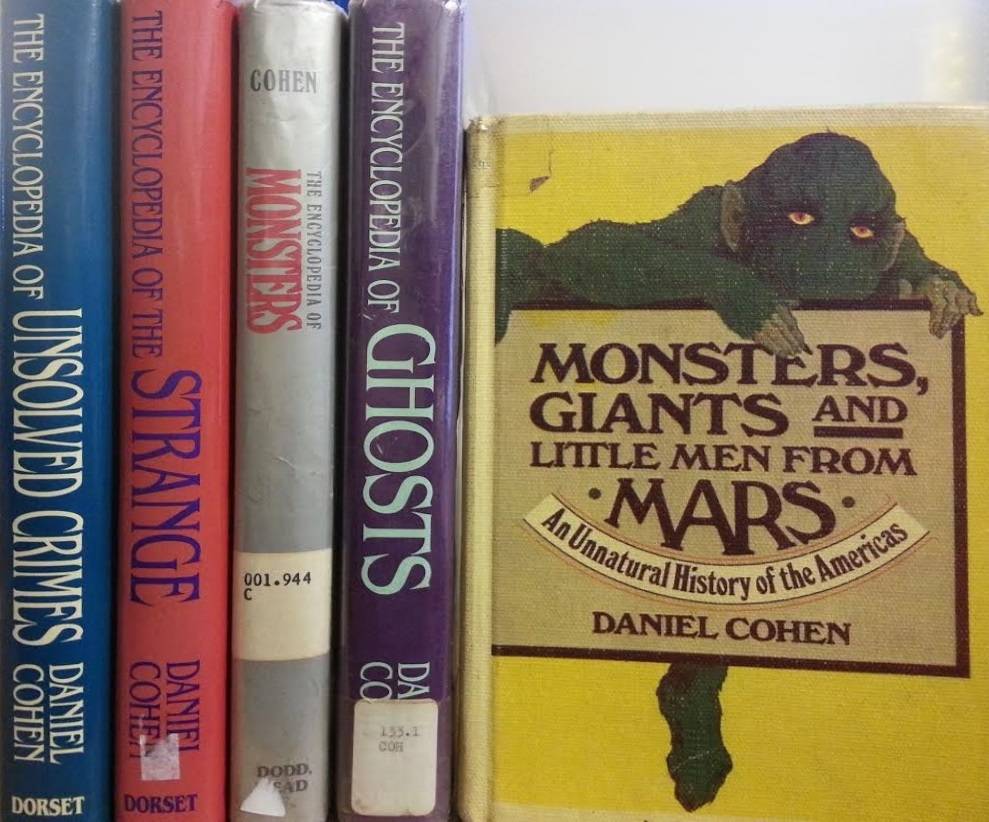 When I was a youngster, one of my favorite books to borrow from my school libraryÂ was “Monsters Giants and Little Men from Mars” by Daniel Cohen. It features an exposition of all sorts of cryptozoological topics such as the titular monsters (Loch Ness etc…)Â giants (theÂ Cardiff giants**)Â and little men from mars (MIBs) plus many others. It’s written from a skeptical standpoint, but that fact went completely over myÂ youngÂ monster-loving head (similarly it wasn’t until cartoon network reruns ofÂ Scooby-Doo that I would realize that the entire point of the show was that the monsters were never real***).

When my daughter became a fan of the DisneyÂ show Gravity Falls (think X-files for kids without the god-awful myth-arc episodes) IÂ remembered Cohen and bought a copy off the internet for her. She immediately lost it so thoroughly that if Cohen ever writes another edition, he canÂ add a chapter aboutÂ my disappearingÂ copy. I bought another, but fortunately they’re ridiculously inexpensive.Â She’s neverÂ read thisÂ one either. Oh well…

While I was hunting down that second copy, I discovered that Cohen had written a few additional books (a few hundred actually) including a set of young adult encyclopedias on various subjects ofÂ interest to gamers (actually, he describes them, to paraphrase, as “subjects of interest to [“reluctant … and not especially gifted”] readers”Â ) but to be fair he did plenty of his writing in the period preceding fantasy gaming so perhaps he didn’t anticipate this use of his work.

Each of these Encyclopedias is about 300 pages long and while entries are given only a cursory review and the style is simple, that makes them easy to read quickly and allows them to cover a variety of topics. This, coupled with the fact they cost betweenÂ a penny to a few dollars apiece makes them an excellent set of books to turn to for inspiration and interesting game ideas. The books do tend to have a disproportionate focus on the northeast region of America, but given the age in which they were written it’s not unreasonable that Cohen had best access to the area around his home and there is still plenty of variety to be found.

The Encyclopedia of Ghosts: This volume covers eight different categories of ghosts from famous ghosts toÂ animal ghosts to poltergeists.Â Two of my favorite entriesÂ in this book are Corder’s Skull (the skull of a hanged murderer is stolen and makes no end of mischief for those involved until it is buried in consecrated earth) and The Moving Coffins of Barbados (The coffins in a sealed family crypt are found in disarray each time it is opened).

The Encyclopedia of Monsters: By far the most expensive of the four books (Almost Four Dollars as I write this!) this one covers humanoids, creatures of land, sea, and air, creatures from folklore and others. Some examples: Gef the Talking Mongoose (an invisible talking mongoose that plays pranks on his host family and spies on their Â neighbors), Jenny Hanivers (fake dragons carved out of dried fish of the skate family), and the Skunk Ape (a relative of bigfoot with severe BO problems).

The Encyclopedia of the Strange: Strange objects, locations, people and events are covered in this book. Much of the contents is specific to our history and would have to be re-skinned (Atlantis and Lemuria, the Bermuda triangle, The Mary Celeste, etc..) however others can be used without much trouble. The Barisal Guns (strange sounds like cannon shots from a swamp) and the Great Siberian Explosion (a mysterious explosion that flattened a hundred square miles of SiberianÂ timberland)Â are examples of these.

The Encyclopedia of Unsolved Crimes:Â This book is a perfect source for plots or mysteries for your game, though it seems likely that some of these unsolved crimes have actually been solved since the book’s publicationÂ inÂ the lateÂ 80’s. Some of my favorites from this collection include the assassination of Georgi Markov (killed withÂ a poison laced bead driven into his leg with a special umbrella, supposedly for political reasons) and the case of Richard Hunne (a trial over a minor disagreement that resulted in Hunne’s murder and his corpse’s trial for heresy).

Many of Cohen’s books are interesting reading and cover a wide variety of topics. Though it’s doubtful they will ever get modern reprints, at least they can be had from second hand shops and sites like Amazon for only a few cents each.

*Technically there were five, but I’m not interested in the 1985Â Encyclopedia of Movie Stars.
** Yes, there were two
*** At least until some of the later spinoffs

2 Responses to The Four* Encyclopedias of Daniel Cohen