Conventional Wisdom: My Weekend of Call of Cthulhu 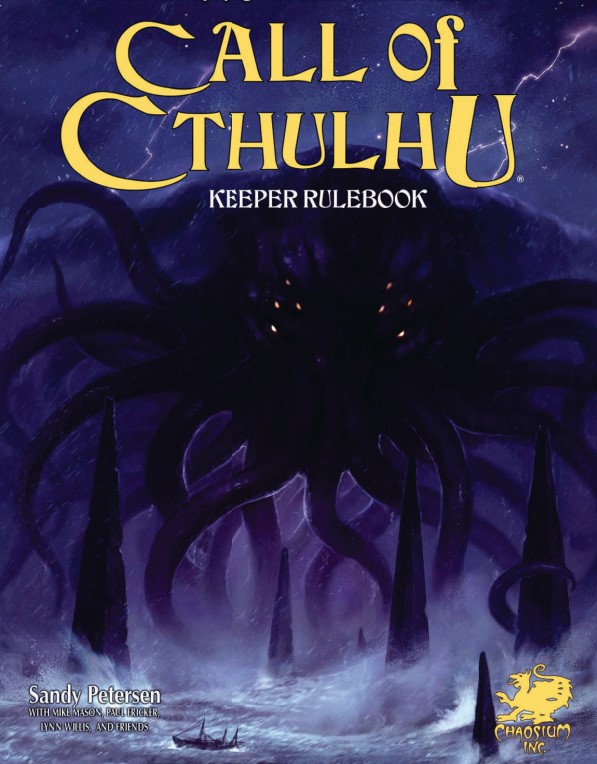 This article originally appeared on my blog which you can find here. In the past, I’ve heard some comments that in addition to reviews, some readers would appreciate some thoughts on actual play. I’ve got a few of these articles on my blog, and I wanted to share this one here, especially after I played multiple sessions of Call of Cthulhu in the same weekend.

Over the weekend I signed up for multipleÂ Call of CthulhuÂ games at the local gaming convention, because I don’t get the play the game very often, and most of the time when I play the game at conventions, it is a pretty satisfying experience. What follows are some observations based on my games this weekend, and if you follow me on social media, you may have seen some of these bits here and there already.

Before I get into my observations about the game itself, I just wanted to point out a really annoying thing about Cthulhu inspired material. People plaster Lovecraft’s face all over the place in the RPG industry. I don’t get it.

I’ve played Star Wars, Star Trek, and D&D tabletop games before, and yet those games don’t seem to plaster George Lucas, Gene Roddenberry, or Gary Gygax’s picture in every single book that comes out. But for some reason, people really need to reprint the image of their patron saint of cosmic horror.

In addition to seeing Lovecraft’s mug in theÂ Call of CthulhuÂ books over the weekend, we had a nice, atmospheric map of Arkham on the table . . . and in the margins, right there, Lovecraft’s face. I think I’m finally at the point where I cannot in good conscience buy anything about cosmic horror that includes Lovecraft’s face anymore.

What Makes a Cosmic Horror Game?

I’ve learned a few things about my interactions withÂ Call of CthulhuÂ this weekend, beyond getting increasingly pissed about seeing Lovecraft’s face on everything. I mentioned having generally positive convention experiences withÂ Call of CthulhuÂ in the past. I think that most of the Keepers I’ve had over the years at conventions were really interested in portraying the feel of the genre.

I think some CoC GMs mistake the futility of PC survival with the futility of action. I’m fine with “succeed at a cost to oblivion” but not thrilled with “keep failing until you die.” Anything about cosmic horror should be a strong example of succeeding at a cost. People who want to emulate the genre are probably ready for bad things to happen to PCs, as long as the story advances.

Overall the convention CoC I’ve played over the years, the most enjoyable have been sessions where GMs see the expansive skill list as a way to flavor what needs to be done, rather than a narrowly defined set of logic gates forcing you to use this 5-20% skills.

It probably goes without saying that random mental illness is very bad, and any stressful break down that’s tied to character traits is way more fun to roleplay, because you are more fully exploring the character, not given a disassociated improv prompt that is also reductive.

I also think there is a point of no return for plot resolution. If you find out, say, less than 50% of the weird steps towards what happened, it’s cool to end the session thinking “what was all that about.” If you uncover 75% or more of what’s going on, but that last 25% makes everything else even more random and nonsensical, you really need some way to get an overview to the players.

The Cycle of Failure
Â I don’t think anyone going to a convention game ofÂ Call of Cthulhu is looking to walk away unscathed, but there is a difference between unscathed and unresolved.Â

MostÂ Call of CthulhuÂ scenarios I have played in at conventions have underscored the idea that you will resolve the situation, you just won’t likely be doing much else with your life after you got the answers you were looking for. I don’t think anyone going to a convention game ofÂ Call of Cthulhu is looking to walk away unscathed, but there is a difference between unscathed and unresolved.

Some examples of frustrations I had over the weekend:

I think 7thÂ EditionÂ Call of CthulhuÂ has much better tools for handling forward momentum than past versions of the game. I think being able to burn luck and push rolls are great additions. They weren’t additions that were handled well in my games over the weekend.

I’ve had convention games where I’ve been convinced I was King Arthur and was picked up by the police while dueling a hapless fellow investigator that I mistook for Lancelot. I’ve sacrificed myself to stop a ritual that would have drained the life force from captive children. I’ve bled out on the way to a car after setting a local corrupted church on fire. But all of those situations were satisfying because the session itself rarely stalled out. It had forward momentum.

I will say this much about playingÂ Call of CthulhuÂ multiple times this weekend. I really want to dig back into my copy ofÂ TremulusÂ now.

Do you have a favorite property that has been expressed in multiple games? What do those games do differently, and how do those aspects emphasize different aspects of the genre? Do you enjoy playing those different games at different times? Let’s hear about it below!