Connecting the dots. Mysteries are always about connecting the dots. In novels and books, the author is in complete control of the pacing of the clues (read: information) and how they are presented to the reader. In an RPG, disseminating information to the players can be a bit more haphazard which can often foil the unveiling of a mystery in a graceful manner. I started to think about how I could control the flow of information to make the mystery more enjoyable.

A few weeks ago I saw the latest Sherlock Holmes movie, and thought it was quite enjoyable. One of the things that I really liked was the cinemagraphic technique where Holmes would focus in on a specific detail: a button on a shirt, a bit of tobacco, etc. Then later in the same scene or a future scene, Holmes recalls the details as a series of images. I wanted something just like that:

In most RPGs (Gumshoe system excluded) an investigation often has the players in an area full of clues. The GM calls for some skill checks, and then based on the rolls starts giving out information. Once the information hits the table, the players start asking questions (about what they saw as well as what others saw), which leads to a series of knowledge checks, then more clues, and then people start connecting the dots. Suddenly the table is a buzz as the players are working on the meaning of all the information. That kind of scene is fine if there is an infinite amount of time for the players to mull over the clues.

What happens when the players don’t have enough time to hash out all those details? What happens if the players are in a room where they don’t have the opportunity to explore it on their own timetable? They still have enough time to spot interesting items and facts about the room, but lack the time to ponder their meaning let alone collaborate on their relation to one another. This would lead to two more needs:

To meet the four requirements I had, I would need to pass some kind of note to a player. This is not cutting edge GMing; I once ran an Amber Diceless game on 80% player notes, but I have never done it only for clues. I wanted to prep these in advance, since I did not want to scribble down information in the middle of the session. I decided to prep some index cards.

I took the total list of clues and wrote them onto individual index cards. Then to make the descriptions shorter, I did some Google Image searching for images similar to the items that I needed. I printed the images out and taped them to the card. Now I had a short stack of cards each with one clue on it, with a brief description and a picture of the item. Here is an example: 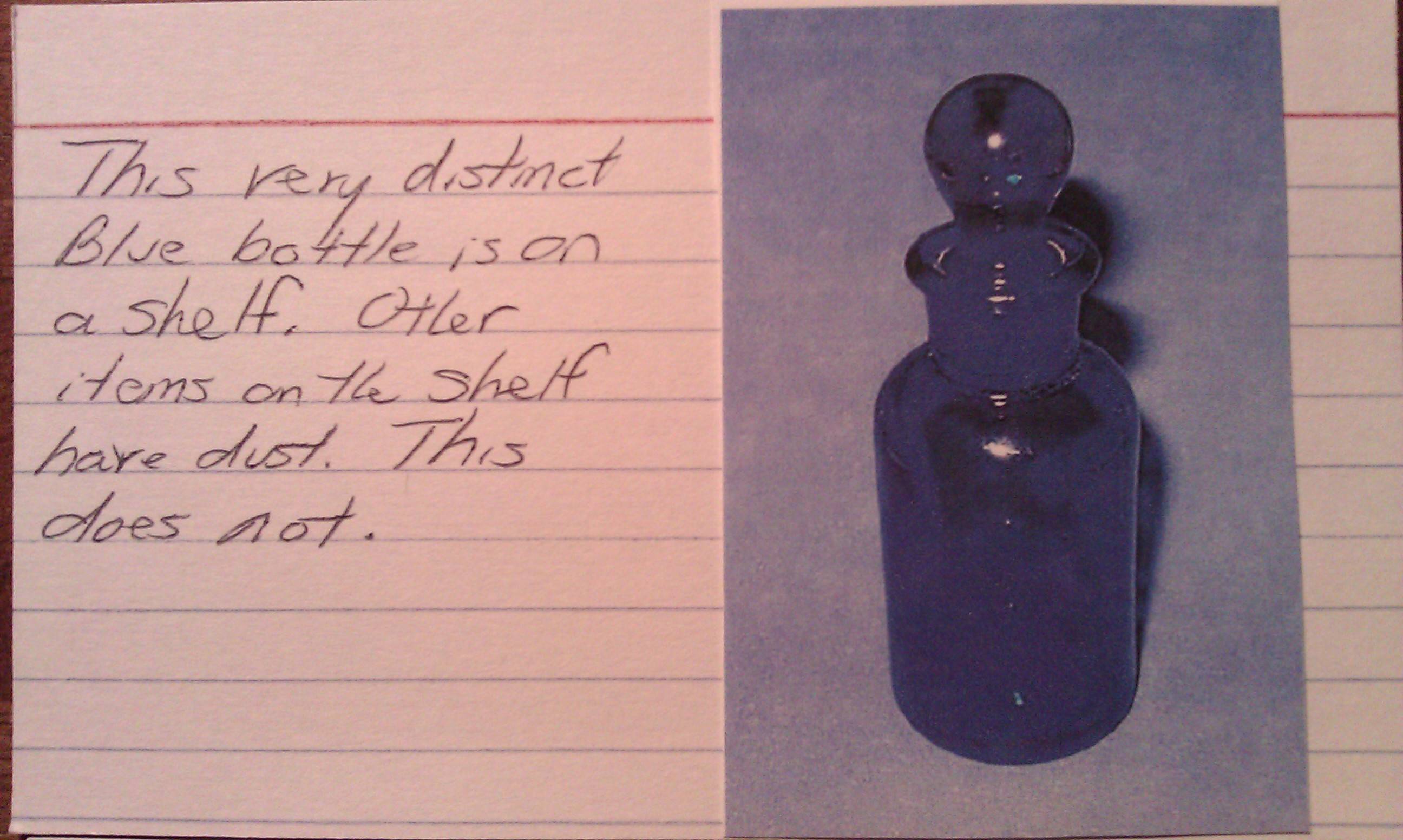 Putting The Cards Into Play

In my current All For One campaign, the Musketeers broke into the Bastille to rescue a woman who had been kidnapped. When they find her, she is not in a jail cell, but rather the quarters of the Captain of the Guard. She tells them that the whole thing was a mistake, and that she is there of her own will (in truth she was the target of a love potion and not of her own will). As the Musketeers are talking to her, they are standing in the room passively looking around; she would not allow a formal search. I ask for the appropriate skill checks, and based on the checks made, I distributed cards to the players.
The players do not have time to have a discussion about the things they are seeing, as they need to get out of the Bastille before the next guard patrol arrives. I turn up the pressure on them to make sure they don’t talk about the details. They depart the room quickly, escape the Bastille, and later when they have time to discuss, they share with each other the details they picked up in the room, via the clue cards. At that time, I then had the players make additional skill checks, representing the time they had to think about each clue.

Overall the whole process was very organic, and did not sound contrived. Each player added their piece of the puzzle, and soon the plot revealed itself, in a very natural way. The players also thought that the process worked well, and that the cards aided to the scene.

It’s All In The Cards

The clue cards worked very well for the specific scene I wanted to run. They allowed me to convey specific information to the players, without sharing it with the table, slowing the pace of information. It allowed the investigatory scene to be very quick and under pressure, and the collaboration scene to be very natural.

Have you ever used clue cards for a mystery? How do you moderate investigations which are time constraints?