In Rebuttal of the Level-Tiered Starting Area 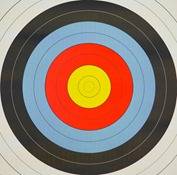 Most RPG settings feature the same level-tiered setup. The PC’s home base is surrounded by an area populated by first level monsters, while the next concentric area is populated by second level monsters and so on.Â  It’s usually a bit more complex than that, but that’s the basic model. Problem is, the basic model, and any models flowing from it are bullshit. Of course, it’s always done that way for playability, not realism, but there’s no need for it to be that way.Â  A more “realistic” model is a reverse level-tiered system, which is not only not a lot of extra work to set up, but is more natural looking and more importantly makes for more interesting boundaries and setups and lends itself to natural adventure hooks.

Let’s start with the basic truth.Â  The biggest baddest monster pretty much takes what it wants. So if there’s a choice area in your campaign, it’s going to be owned by the most badass monster or group of monsters around. This could be a single ultra-nasty beasty, a huge population of weaker beings led by powerful individuals, or whatever. The important thing is that if it wants the terrain there’s nothing else in your campaign with the chutzpa to do a damn thing about it and once they’ve got it, nothing short of divine intervention, maybe in the form of high level adventurers are going to pry them out.

So what do the second string monsters do about it? They might suck up to the big baddies in hopes they’ll share or at least employ them or trade with them. They might hang around outside the gates and jump on any scraps of whatever it was that drew them to the area in the first place that they can get their hands on. Or, they might just pack it in, look for the next best spot, and go set up camp there.

Further power levels of monsters will do the same. Either they’ll camp out around the territory of an established higher power or they’ll go somewhere else.Â  This does create a concentric level based tier, but it’s not the low to high tier around the starting area that we’re all familiar with, but rather a high to low tier around areas of interest. 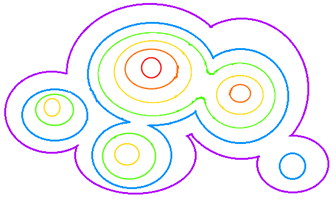 This sample diagram shops what a setup like this might look like. Already you can see the more interesting borders in play, and since the areas where the tiers begin are contested it’s clear that they hold some resource, tactical advantage or aesthetic benefit that makes them of value to PCs or those a group of PCs might get a quest from. 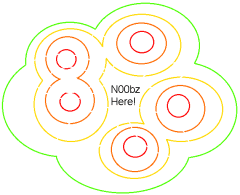 But that leaves us with the same problem that gives rise to the traditional “noob zones”. Where do we start the PCs so they don’t get their asses handed to them the instant they walk out the city gates? The simple answer is that these areas go at the edges in areas that no one else wants or in “pockets” of undesirable terrain that’s between areas of interest.Â  The advantage of this setup is that the PCs are starting in an area so crappy that literally no one else wants badly enough to take it from them. That means that everyone else out there has nicer stuff and better places to live than they do, which is a great incentive to get out their, do some adventuring and better the position of your holding. 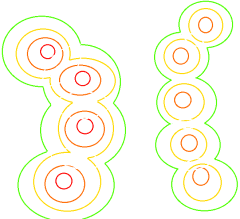 But these pockets don’t have to arise by accident. Races whose major strength is based on large numbers of weak fighters backed up by more powerful specialist and exceptional individuals (Like PC races) can intentionally build them with a series of fortifications and garrisons surrounding a soft underbelly which is the fantasy standard anyway simply because it was the historical standard. And of course it was the historical standard because it worked. These defensive pockets can be built right next to each other (think countries) with a relatively low level “buffer zone” between them or they can hold a valuable site right in the thick of a high to low level tier. In the later case, PCs may have to gain experience inside their own defensive zone wiping up the occasional threat that sneaks by their front line or handling internal affairs until they’re tough enough to take on their neighbors.

To use a setup like this in your game, you need a rough sketch of your campaign area, and a brief list of all the enemies that are powerful and organized enough to hold territory.Â  Sort your list by how badass the enemies are if the PCs were to encounter the largest organizational unit of them that exists (City, Tribe, Solitary and slaves, etc…) Make sure your PC’s allies, race, or whatever are on the list with everything else.Â  Then go down the list and for each pick a spot on the map that’s somewhere they’d like to live or where a resource they’d want could be found. If another baddie already holds something they want they might instead camp out around the more powerful settlement as outlined above. Alternately if they’re numerous, and tactically minded, they may build a defensive pocket and capture more territory and resources then they could otherwise hold. Enemies might also hold several locations if they’ve got the manpower or there are multiple groups of them (Think nations with frontier outposts, or fractious tribes). If the PC’s sponsors aren’t last on the list, they can claim their own territory just like everyone else.Â  Otherwise they get the territory that no one else wants and the PCs have their jobs cut out for them, which isn’t a bad thing for your game at all.

15 Responses to In Rebuttal of the Level-Tiered Starting Area