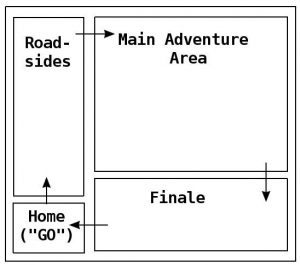 “There’s no board” is a common concern raised by those who’ve never played roleplaying games (RPG). While many gamemasters (GM’s) use terrain, maps, and tiles, there generally isn’t one board like in traditional games. But that doesn’t mean there can’t be: many “Almost RPG’s” like Dungeon and Heroquest use boards quite well. In this article, we’ll look at one process for designing a single board RPG session. The design philosophy will be geared towards newer players. Having a board may make it easier for them to consider playing, which is good for the hobby. Also, a board can provide a visually memorable experience, and make it easier for GM’s to organize their sessions.

The design motif will be based loosely on a Monopoly board, and some of the areas will not be gridded for tactical combat. The image at the top of the article shows the design.

ELEMENTS OF THE BOARD

Let’s look at what to include on your board in the order that they may appear. As with everything in RPG design, feel free to change whatever you like.

Town – Imagine the “Go” square of a Monopoly board. However, instead of a big red “GO”, our board will have the image of a medieval town, a starbase, government office building, or superhero lair. Player characters (PC’s) will start here and get their mission specs from a friendly non-player character (NPC) or superior. You may wish to have a card, token, or mini to represent this NPC and a couple of other NPC’s. They may wish to do a little shopping or asking around while they are at the home base.

Roadside Encounter(s) – After leaving town, imagine proceeding along the first few sets of properties in Monopoly. This part of the board will be a roadside encounter with a wandering monster, a travelling merchant, or band of the Big Bad’s minions (possibly even the yellow kind). Also, it could be a chance to fly through an asteroid storm or ford a raging river. The objective in this area is not to kill the players, but to present an opportunity to showcase some of the rules of your system. You may wish to include two or three “squares” here. Perhaps they will have a physical encounter as they fly through space, then a chance for roleplaying once they reach their planetary destination.

Main Adventure Area – This area occupies most of the rest of the board, including the middle (we don’t need a spot for those Community Chest cards anyway.) This is where you’ll place your dungeon, crypt, or space bandit lair. Players can now get off the railroad. Give them a front and back entrance to choose from. You can include some branching corridors, or guards that they can either fight or bluff. You’ll probably want about three or four rooms in this area. Use as many as you like, but consider what a party can reasonably accomplish during a single session. The board game motif doesn’t easily support megadungeons or huge epics, nor is that the point.

Finale – This area will occupy the Park Place and Boardwalk area of your map. If you are running out of room, you can place the finale on the back. After (hopefully) defeating the major villain or solving the crisis, you can handwave the return journey and bring them back to “GO.” (Whether they get 200 dollars is up to you.)

If you are artistic, you may wish to draw your board yourself. However, don’t feel like you have to, and even artistic types are sometimes pressed for time. You can just use your favorite paint-type program to assemble images and maps to make your board image. Posterazor is a free program to help you print and glue the board together. There are also sites online to help you with this.

Once you have your board, you can use it as a paper map, or glue it to posterboard or foam core. For a longer session, you can use the back of the board for more encounter areas or for a second level of your dungeon, asteroid base, etc…

Using a board can make a game a bit linear. You may wish to have some extra paper handy to draw a quick extra map if the players take a different direction. The board is there to help organize your play, not limit choice.

Unlike board games, you may not want to reveal everything at once. A simple piece of cloth can serve as a “fog of war”, and can be folded back as players advance. I’ve also covered areas with paper.

You may have to limit the size of your board. Many convention game take place on folding tables that are only about two feet wide, so you can’t make it too big. This may be difficult for games that require tactical combat grids. Also, you don’t want to make it too large and difficult to carry.

Making a board takes time. However, hopefully you can reuse the board for other sessions, or use it again for online play. After all, no one throws away their board games after only one session.

Though we used Monopoly to help guide our design, it is certainly not the only option. Imagine a mystery or horror game based on a mansion like Clue (or even using the actual Clue board). A game involving a long journey through a world like Middle Earth might use a board like that in Life. And if you want to design something like Mousetrap, go for it. Considering your favorite boardgames from childhood may spark your imagination in new and fun ways.

Is using a board too limiting, or can it be a way to include new players? What other design motifs can you come up with? Let us know below, and watch out for Colonel Mustard. He’s wicked with that candlestick.