Are you gaming, narrating, or simulating? 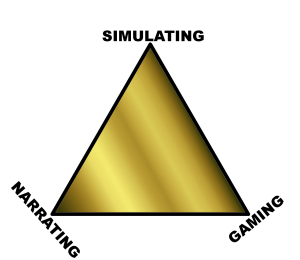 When it comes to role playing, there are many styles of players, game masters, and games out there. We’ve all got different labels for these different parts of the hobby. Generally speaking, these styles and stereotypes can be boiled down to three different categories: gaming, narrating, simulating.

In this category we find the question, “How do I win?” As many of us can espouse, getting together to have a good time is “winning the game.” For others, there needs to be a defined in-game mechanic wrapped around the gameplay to define the top dog at the end of the night’s festivities. A vast majority of role playing games have no such mechanic, but this can be overcome through creative styling of the game.

A role player of this type really needs to be presented with quests to accomplish, bosses to kill, kingdoms to overthrow (or save), and similar goals to achieve. If the GM can present these types of goals, put in place adequate obstacles, and wrap some good storytelling around the events, then the players of this type will enjoy themselves and tell stories about what their characters did for years to come.

If a GM is firmly in the camp of “I must win,” then there will be something off about the game play. It’s not up to the GM to “win” or “lose” the game. They are there to present challenges to the players for their characters to overcome during the course of play. I’ve encountered these types of GMs through decades of gaming, and I’ve always struggled to enjoy the games. Please don’t get a “gaming game master.”

I’m actually hard pressed to think of a system or ruleset in which there is a definitive “win” or “lose” scenario. There are an ample number of board games in existence with these mechanics that have strong storytelling, almost role playing, aspects to them. These blur the lines a bit, but for a tried-and-true role playing game, I can’t think of any. If you know of one, I’d love to hear about it in the comments.

The narrative-style players delve into their characters in a deep manner. They tend to have copious notes regarding backgrounds, cultures, traits, and aspects of their characters. Growing the character within the story arc is often more vital to the players than collecting loot, gaining powerful magic items, or advancing in power levels. This isn’t to say that growth in ability isn’t important, but it needs to serve the players’ concepts of their characters.

Narrative GMs often present the most memorable games. They’ll celebrate PC success, and enable the players to expand the story of their characters in a way that fits the character concepts presented around the table. This is incredibly difficult to do in larger groups, but if the players are on board to assist the GM in the telling of the story, then the quality of the games will reach epic levels.

Some games are more focused on the rules and the crunchiness of the interactions between PCs, NPCs, and monsters. These games can be very fun to play, but for a narrative game, there are plenty of games out there that explore characters as a collection of ideals and goals more than an assembly of numbers. Games using descriptors for how strong, fast, smart, or charming a character is fall into this category.

With simulation-style gaming, most people are looking to emulate reality as closely as possible. There are many rules covering pretty much every situation that can come up. Players tend to expect rigid strictures for actions, and GMs provide internally consistent behavior in the universe.

GMs that know the rules inside-and-out, can quote the rulebook, or know exactly what page particularly complex rules are on can easily run a simulation style game. These game masters run the game smoothly and well. Sometimes, however, a GM might come face-to-face with analysis paralysis when a player attempts to perform a logical action that isn’t explicitly covered by the rules presented within the covers of the books.

Simulating the events and actions possible in the world represented by the setting of the game are the strengths and goals of games in this category. Games with intense levels of detailed rules to cover almost every eventuality excel in the simulation arena. Likewise, games that proscribe a limited list of actions possible when conflict arise are often simulationist in nature. These games can be very fun for the right group, and often fall hand-in-hand with the gaming category.

What kind of gamer are you? What kind of games do you enjoy running or playing in? We are living in fortunate times for our hobby. There’s something out there for everyone, and many of the current game offerings cover all three of the above categories to some degree. Many of them are stronger in one area than another. The trick is to find the game system, player group, or game master that most supports what you enjoy most.

21 Responses to Are you gaming, narrating, or simulating?